Kyrgyzstan, due to its location in the heart of Central Asia, was once a very important country on the the Great Silk Road. The Silk Road was a system of caravan trade routes that ran through Central Asia, linking countries from the West of the Mediterranean to China and India.

It was a very important time in history in the development of cultural exchange for the people living on the trade routes. The origin of many cities and historical monuments that you can still visit today in Kyrgyzstan and Uzbekistan, was closely connected with the Silk Road, one of them was the city of Balasagun. 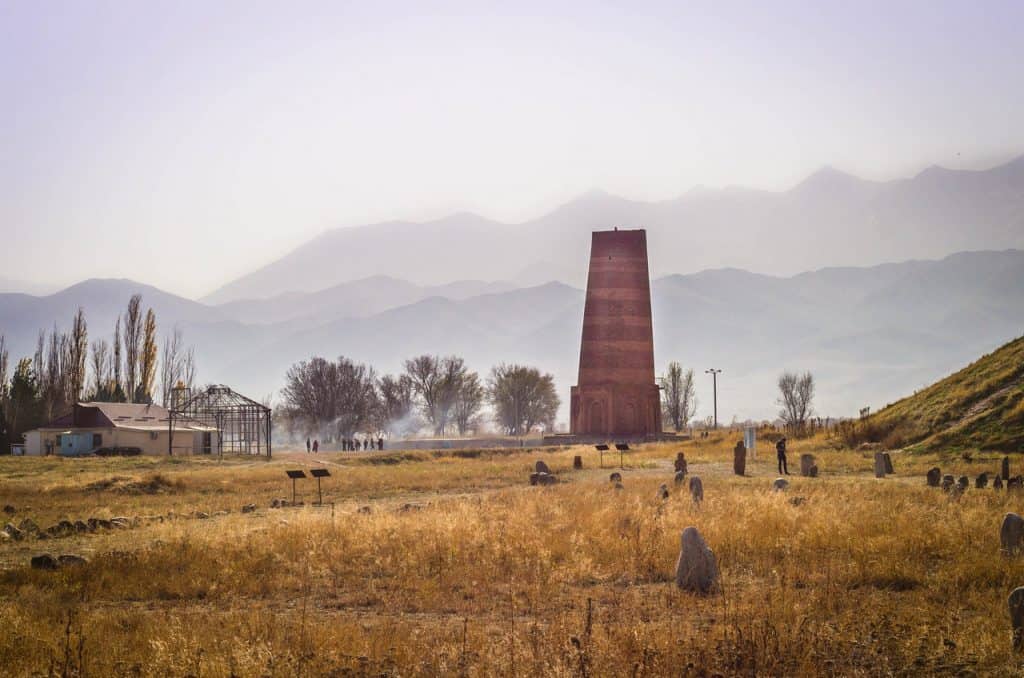 “ I was transfixed – as I was when I found out about an important Turkish map in Istanbul that had at its heart a city called Balasaghun, which I had never even heard of, which did not appear on any maps, and whose very location was uncertain until recently, and yet was once considered the centre of the world.”

– Peter Frankopan, author of The Silk Roads: A New History of the World.

I also had never heard about Balasagun and had no idea of the importance of this city until the day I went to visit the Burana Tower, located about 80 km from Kyrgyzstan’s capital city Bishkek. If you ever plan to visit Kyrgyzstan, you’ll definitely come across photos of this tower in guidebooks and tourism offices.

This 25m high tower, a once 40 meters tall minaret, is all that remains of the ancient city of Balasagun. It is one of Kyrgyzstan’s most famous historical sites.

The ancient city of Balasagun

Balasagun was founded in the 10th century by the Karakhanids, “the black khans”, who ruled over the Karakhanid Empire, that stretched from China to the Aral Sea (which is now known as the Lost Sea of Central Asia). Balasagun was once the capital of this empire and used to be a large city, containing many public institutions, mosques, cathedrals and a fortress.

In 1218 the city got overrun by the Mongol troops, which also meant the end of the Karakhanid Empire. By the 14th century, the city was left in disrepair and over the years, numerous earthquakes wiped out almost everything that was left of it.

It’s quite surreal and sad that there are now only a few mausoleum remains, some remnants of a fortification and a minaret – the Burana Tower – left from a once flourishing city that welcomed thousands of Silk Road caravans.

The legend of the Burana Tower

The name of the tower – Burana – comes from the Arabic word “monar”, which means minaret. A minaret is part of a mosque, a high tower which is used for the call for prayer. There are a lot of legends about the construction of the tower, one of them reminding me of the fairy-tale of Sleeping Beauty:

Once upon a time there was a powerful khan who had a beautiful daughter. To celebrate her birth, he invited all the fortune tellers and wise men of the land.

They all foretold she would have a long and happy one, well… all except for one. One old man predicted that the girl would die from a spider bite on her sixteenth birthday. This prediction terrified the khan so much, that he built a tall tower where he placed his daughter in isolation.

The girl grew up in the tower. Servants brought her food and drinks, delivering it in a basket by climbing a ladder that was placed against the outside walls of the tower. Everything got inspected thoroughly, to make sure that no spider would ever reach her. On the day of her 16th birthday, the khan was so happy that the old man’s prediction didn’t come true, that he hurried to the tower to celebrate it with his daughter.

He went to her room carrying a basket of fresh grapes. In his rush, he failed to notice a poisonous spider which had concealed itself in the basket. As his daughter was reaching for the fruit, the spider bit her and the girl immediately collapsed and died.

The khan was stricken with grief and cried so loudly, that the tower shook. The top part of the tower toppled down, leaving it in ruins.

How beautiful (and sad) this legend might be, the fact is that the upper part of the minaret collapsed during after a major earthquake in the 15th century, reducing its size from 40 to 25 meters. 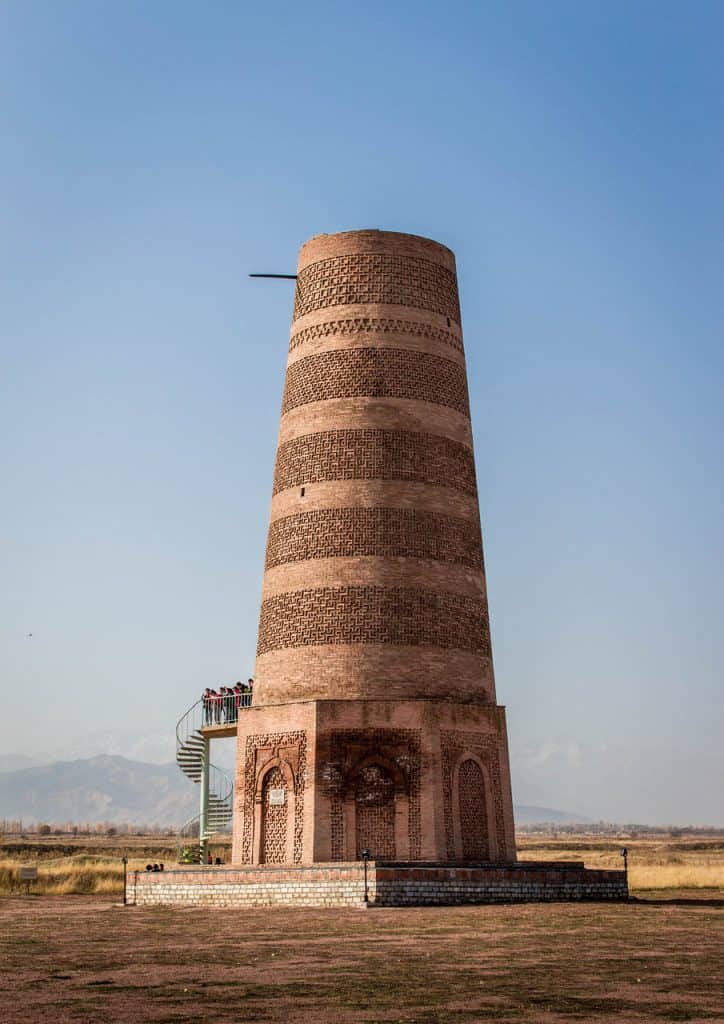 Do you want to discover more unusual and remarkable places in the world?

The Burana Tower is now one of the oldest architectural constructions of Central Asia. It was built in the 11th century and was used as a template for other minarets.

These minarets are decorated with geometric patterns in the brickwork. In the 1970’s a restoration project renovated the remaining part of the minaret and opened the entire site as an open-air museum to the public. There’s a small museum which has a small collection of artifacts discovered around the complex.

Visitors can climb the steep, spiraling staircase inside the minaret for 60 som (about $1). The entrance to the minaret is strangely enough not on ground level, but a couple of meters above that you can reach via a metal staircase.

It can feel a bit claustrophobic inside the tower but it’s not a long climb and once you reach the top, you’ll be rewarded with some spectacular views over the whole site and the surrounding Tian Shan mountains!

There’s a collection of ancient bal-bals in the field near the Burana Tower. The bal-bals are gravestones, used by the nomadic Turkic tribes who used to roam around Central Asia in the 6th century.

These gravestones were initially erected as a representation of slain enemies and later became memorials for their own ancestors. The bal-bals are oddly proportioned, with misshapen heads and short torsos, characterized by detailed carvings of faces and hands.

They were made by some of the greatest stone carvers of their time and are remarkably well-preserved. While most bal-bals seem to be gazing in the distance with a stern look on their face, you can spot one or two who seemed to be enjoying their eternal life with a smile.

Keep an eye out for the ones which carry a wine glass. They’re thought to be a representation of the Nestorians, a group of early Christians who also lived in Balasagun.

Between the Burana Tower and the field of Bal-Bals is a small hill of about 10 meters high. It is believed that there’s a palace complex or a temple hiding in that hill, which existed in the 10th century, even before Balasagun was established.

There hasn’t been any official archaeological excavation yet, as there aren’t financial resources available for this project at the moment.

Standing in the middle of nowhere, the Burana Tower might not look very spectacular, but once you know that this site used to be a large city, which was once considered to be the center of the world, it feels pretty surreal to walk around here. It’s worth a visit if you’re interested in the history of Kyrgyzstan and the Great Silk Road.

Are you interested in learning more about Kyrgyzstan? Read our Travel Guide!

How to get to Burana Tower from Bishkek by public transportation

You can easily visit the Burana Tower as a day trip from Bishkek or on your way towards Lake Issyk Kul. The Burana Tower is about 8 km from the town of Tokmok.

There is no direct mashrutka (minibus) going from Bishkek to the Burana Tower but if you follow my instructions, you should be able to get there in two hours.

A special thank you to our friend Aleksei Belov from Kyrgyz Nomad for taking the time to show this remarkable place and sharing his insights about Burana Tower.

ABOUT JOURNAL OF NOMADS

Journal of Nomads is an Adventure Travel Blog for independent backpackers and adventurous travelers interested in culture, nature, and outdoor activities in off-the-beaten-path countries.

JOIN ONE OF MY ADVENTURE TOURS!