Turkey has been portrayed in a bad light lately by the media: people dying in bomb attacks, the war between the Turks and the Kurds, the many refugees from Syria fleeing into Turkey to make their way towards Europe, the turbulent atmosphere near the borders of Syria and Iraq,….

Tourists are staying away because they are afraid. Too bad because Turkey is a spectacular country with very welcoming people!

People who haven’t visited Turkey yet assume that it’s a third world country with very strict Islamic rules. We’ve only been here for a couple of weeks but we can already say that this is not the case!

The villages are still very traditional but the cities have a blend of local and international influences in the buildings, the shops and in the dress code. Some men and women are still dressed traditionally (sleeved tops, loose trousers, knee-length dresses or skirts, headscarves) while the younger generation are dressed in the same clothes we would wear in France, Belgium, Italy,…

The first place we visited was Marmaris, a little city on the Aegean sea where we arrived by ferry. We noticed this is a touristic city with a lot of trendy coffee shops and restaurants. Most towns and cities located on the West Coast of Turkey are built in a more Western European style.

There are lots of hotels and resorts for holidaymakers. The more inland we went, the more we saw traditional villages and towns. Apparently Turkey is very diverse depending in what area you are. The country is very big ( 783,562 sq km), has a large variety in landscapes and we’ve only seen 2 out of the 81 provinces of Turkey so far so there is still a lot for us to discover!

Despite of the more western look of the cities on the coast, we definitely knew we were in Turkey because we saw the flag everywhere! In the streets, on boats, on cars, on top of a hill in the middle of nowhere, hanging on the front and inside houses,…

we’ve never seen so much red as in our first days in Turkey! The Turkish people have the highest respect for their flag. It’s sacred for the Muslim Turks because of the star and crescent embellished on it (the star and crescent are seen as typical Muslim symbols). For others it is a symbol for their independence, honor, and history. 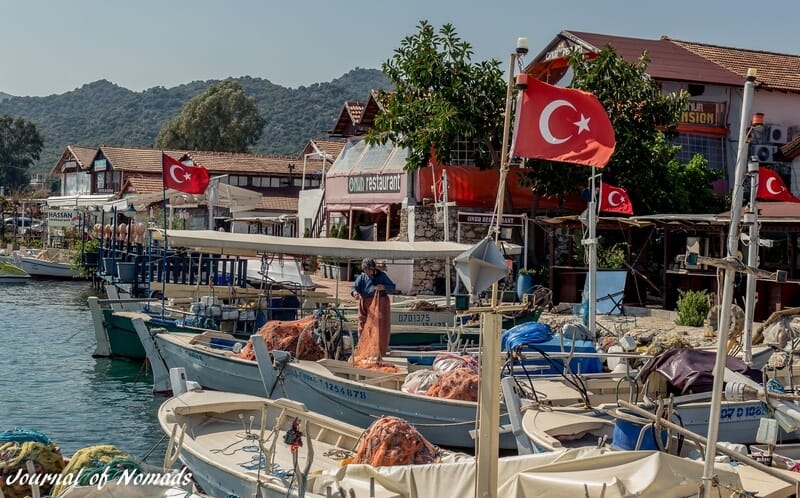 Another sign that we were in Turkey and specifically in a Muslim country, were the many mosques. The first time I heard the call to prayer, I had a huge smile on my face!

The sound represented that we were in another culture! The Muslim are called to pray five times a day.

The call is heard at dawn, at noon, in the middle of the afternoon, just after sunset and about two hours after sunset. The muezzin, a man appointed to call to prayer, climbs the high tower of the mosque, the minaret. He calls through a speaker in the Arabic language “Hasten to prayer”. That’s the moment where the people stop whatever they are doing, get out their little mat and start praying.

However in Turkey we haven’t seen people praying in public like Niko saw in Morocco and I in Senegal. We also noticed that they are not following the strict rules that other Islamic countries have. We’ve learned that Turkey is one of the few secular Muslim countries in the world.

This means that there is a separation between religion and governmental state and that the people are free in their religious beliefs. Even though most Turks consider themselves Muslims, they don’t have to follow the rules of Islam very strictly.

They can go out, drink alcohol, socialize with each other in ways that other Muslim countries would see as a ‘sin’. Religion is more a cultural thing. That’s also why a lot of women don’t wear headscarves.

How did Turkey become a secular state? After the fall of the Ottoman Empire, Mustafa Kemal Ataturk (the founder of the nation) came about and made some drastic changes in the country to detach itself from its Islamic heritage. He formed the Republic of Turkey in 1923 and abolished the Islamic justice system and adopted western justice and law methods.

He made it law that women could wear their own choice of clothing (that’s why the headscarf is not obligated). He introduced the Latin alphabet (before that the Turkish language was written in Arabic) and helped a whole country to learn it. I think I don’t need to explain why he is called ‘The father of all Turks’ and why his statue and portrait can be found everywhere in Turkey, nearly as much as the Turkish flag!

We were also pleasantly surprised at how open-minded most Turks are. They are so welcoming towards strangers! Okay, I’ve heard they love to sell you their merchandise but the people we’ve met were just genuinely kind and friendly without expecting anything in return!

The first night Niko and I grabbed a bite in a little local restaurant. We’ve had lahmacun (we call it a Turkish pizza) and ayran (a typical Turkish yogurt drink) for only €2 each! The owner of the restaurant loved to hear us practice our Turkish with him.

He offered us some free tea and even gave us a loaf of bread when we said goodbye! The next morning we went to a little coffee shop with internet (so I could send my mum a text we arrived safely in Turkey).

The waitress was very friendly and happy to practice her English with us. She even went to get her mother from the kitchen to introduce us to her. Again we got offered free tea and her mother gave us a big bag full of little cakes for the road. We had not even been 24 hours in Turkey and we were already overwhelmed with gifts and tea!

And then comes the hitchhiking part. The very first time I felt a bit out of my comfort zone. It was the first time since the beginning of our travels.

The people are incredibly kind. Our first driver invited us for lunch and tea (is it possible to get a ‘tea belly’ instead of a ‘beer belly’?).

We had drivers getting out of their way to drop us off in a good place to continue hitchhiking and one even gave us his umbrella when it was pouring down with rain! Remember what I wrote about Philotimo in Greece? Turks also have this attitude towards life!! You can read a beautiful example in “The Kindness of Strangers”.

Our first impressions of Turkey? It is not dangerous here! It is a beautiful and enriching country with many ancient traditions and historical sites to discover, an unbelievably friendly culture and very tasty food!

Our travels in Turkey have only started but we are already in love! We feel safe and welcome and can’t wait to explore more of this interesting country!

**Update: We eventually left Turkey after spending almost 9 months there! Read more about our journey in Turkey in our One year of hitchhiking story ! Discover the diversity and beauty of this wonderful country in our other articles about Turkey  or watch our hitchhiking adventures in the Turkey Travel Videos.

160 thoughts on “Is Turkey dangerous? This is what we’ve learned so far!”