What would you do more if you had less stuff? We’re living in a society that throws advertisements about things that we must have in order to be happy, to make our life easier,… A lot of people buy and buy and end up with so much stuff that they lose sight of what really matters. Let’s be honest. Have a look in your house. How many things do you actually need or use daily? How many clothes are there in your closet that you wear weekly, monthly or even yearly? We strongly believe that the more one has, the more there is to think or even worry about. A few months ago we came across the blog of Sell All Your Stuff. We love the concept of how they sold all their belongings – twice – so they could do more with less stuff. Like traveling. Many people use the excuse that they don’t have money to travel. Imagine if they would sell all the possessions that they don’t really need and how much money it would bring in their account. Definitely enough to go on a holiday or even a few months worth of travel! We find it very inspiring how Shelly and Al dared to go for a minimalist lifestyle. This is an interview that will give you a look in the life, the travel experiences and the (humorous) minds of these remarkable people!

Who are the Sell All Your Stuff’ers?

Hi, we are Shelly and Al McCullough, both 39 (actually, not eternally), both from Canada, and house sitting in beautiful British Columbia, Canada.
We travel occasionally. We’re typically in one spot house sitting for a month or more, excluding our recent cross Canada road trip where we house sat in Saskatoon for a few weeks.

How do you fund your travels?

A combination of savings and our online business. After a year of living in Panama we started sellallyourstuff.com. Our site promotes doing more with less, tips on living a minimalist lifestyle, and we urge people to spend money on experiences instead of material possessions. We also have three eBooks for sale, with a fourth on the way:

What did you do before you started traveling?

Al: I was a male prostitute. I wasn’t very good at it though and only had one client…who wanted her money back…actually, it was Shelly…and she needed the money back for a mani-pedi. Okay, all not true. I was in various I.T. related roles after a short career in Hospitality. I have some fun stories though; like how I spilled soup on the shoe of Prince Andrew, the Duke of York. Or when I checked out Derek Jeter…from the hotel I worked at – I wasn’t actually “Checking him out”, but a lady nearby sure was and she was offering herself to Hotel Security just to get closer to the famous Yankee.
Shelly: I also started off in Hospitality but decided to go in a different direction and became a Certified Payroll Manager and worked various Payroll jobs. I don’t have any funny soup-spilling stories though. I guess I was a better server who didn’t spill things!
What is your mission?

We like to experience something unique. We’ve seen a lumberjack competition, got covered in chocolate, floated in a saltwater sensory deprivation chamber. It’s fun doing unique things – they create memories and give you some tales to tell that don’t involve spilling soup on British Royalty.

What or who inspired you to travel?

Uncle Matt from the show Fraggle Rock. I loved his postcards home talking about how the Silly Creatures (humans) lived. But more seriously, there wasn’t a person, place, or thing that inspired us. We just enjoy doing fun and different things and going to fun and different places and creating memories of fun and different experiences.

What’s your favourite way of traveling?
Al: I prefer the car. I can pull off whenever necessary. Stop and sightsee. Sleep (not while driving of course). Eat. Read. Fart and not worry about who might smell it, aside from Shelly, but more often than not I’m wafting it in her general direction anyway. Hey, I’m a guy!
Shelly: I like the speed of flying, but not the events you have to go through prior to flying. I enjoy road trips too, and I don’t mind the bus. But the downside of both of those would be having to smell other people’s farts. I’d say any method of travel EXCEPT a boat. I don’t quite have my sea legs.

What are your favourite hobbies while traveling?

Al: I write. Sometimes I even do it for money too, unlike my previous prostitution career. I have other hobbies that aren’t conducive to travel though, like puttering around a yard or renovating. Actually, I helped a few people with some tiling jobs in Panama. So I got to do some handy work.
Shelly: Reading and podcasts. Can’t get enough podcasts!

What is your best travel memory?

Al: I think this answer changes based on mood. I’ve had some fun ones – like our event-filled week in San Fran, my week of free admission to everything in Chicago, driving the road to Hana in Hawaii in a convertible, first time surfing in Nicaragua, getting drunk with the Pedasi fishermen in Panama on more than one occasion. It’s impossible to pick just one because each place is different and offers another memory.
Shelly: Yeah, it’s hard to pick just one. Biking through the city in Medellin in rush hour traffic. The roller coaster ride “Everest” at Animal Kingdom in Florida. Hiking from Banff to Lake Louise. Floating in a saltwater flotation chamber in Asheville, North Carolina. Eating at the Tonga room in San Francisco where it’s thunder storming inside. I couldn’t pick just one. That’s what great about travel – every destination creates another amazing memory.

Have you learned new skills?

Al: Spanish. Not fluent, but we get by. Heck, I was even able to drop a few one-liners in Spanish with our old Panamanian neighbours.
Shelly: I learned to network more. I was much more introverted before our move, but now I’d say I lean towards extrovert, although sometimes I just want to be an introvert and stay home.

What are your plans for the next year?

We only live life in 3 month intervals, mostly because that’s the longest house sit duration we have ever had. So we’ll be house sitting in British Columbia for the summer, possibly the winter, then who knows. Europe? Australia? Mars?

Again, tough to pick just one because each had its own awesomeness. We both really enjoyed San Francisco and Medellin because of the climate and it seemed we were doing something different each day. At Laguna de Apoyo in Nicaragua the views were just amazing I could stare out over the lake for hours. But then there are so many other places too, like when we visited Quebec City when the city turned 400. The best part of that was we saw a concert in the park that was for the citizens of Quebec – no Celine Dion, no Paul McArtney, just local Qeubecois artists. Oh, and we saw Satan too (picture below).

For us, we go somewhere expecting to have fun, so we try to do fun things and create great memories, so almost every destination can be considered a favorite in some regard.

What’s the most awkward thing that happened to you?

Shelly got a parasite in Nicaragua. We first thought it was food poisoning because she started to feel better after a day of rest (in addition to many trips to el baño). But when she got worse the next day we knew we had to get her to a hospital. She needed five IV’s and was on antibiotics for a week.

What advice would you give to other travelers?

Don’t let adversity stop you from continuing on. You’ll face a lot of adversity on your travels. How you deal with that adversity is what will define not only your journey, but you.

What’s your travel philosophy?
Do more stuff with less stuff! Spend money on experiences, not stuff.

If you like reading about minimalist lifestyles, unique life experiences, or want to follow along with Al & Shelly’s adventures, you can follow them on their website Sell All Your Stuff or on the following social platforms:

I wish I was a rock star in learning languages.   That all I... 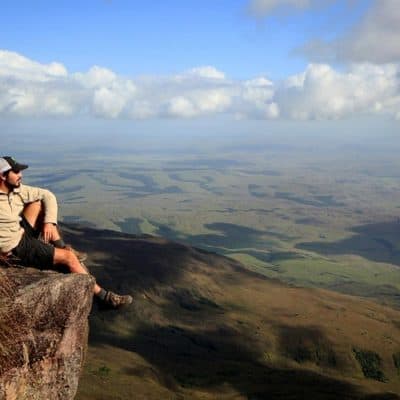 This is the inspiring story by Miguel from Travelsauro about the Magic of Travel. I’ve liked to travel...

This article is an ode to Kyrgyzstan with all the reasons why this little...

Greece is a stunning country with kind, beautiful people and a fascinating history. The ancient...

After 10 days of hitchhiking and camping on the side of the road, we arrived...

Hitchhiking through Europe has been great so far. We’ve had rides from so many people... 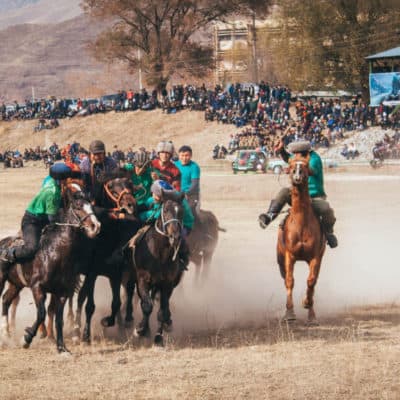 This photo-essay is an insight into Kok Boru, an unusual and popular horse game...