After 10 days of hitchhiking and camping on the side of the road, we arrived in Paris. We were happy and exhausted at the same time. After a year of living in one place and sleeping in the same bed every night, we had to adjust to the unpredictable routine of traveling and camping in a tent.

The tent could stay in our backpacks for a while because thanks to couchsurfing we were welcome to stay 5 nights with Louise and her roommates. They were very welcoming! I find it amazing how generous some people can be. Not everyone would open their homes for a bunch of strangers and make them feel like they’re old friends. We felt very comfortable with Louise, Cyril, Remi and Juno the cat, who has a weakness for backpacks and sleeping couchsurfers. 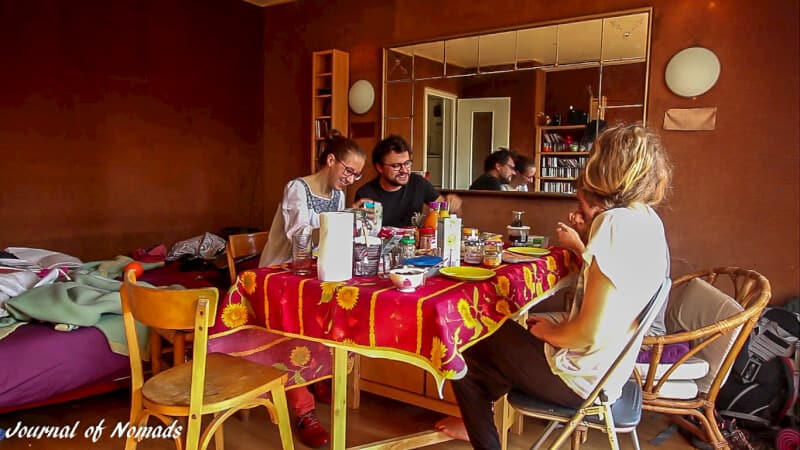 After a good night of sleep (and a purring good morning from Juno who slept in between our heads) we went to explore Paris. It was Niko’s first visit to the French capital and he dreamed of a photo with the Eiffel tower. When we arrived at the world’s famous iron tower many others had the same plan. We repeatedly had to dodge the countless selfie sticks, Paris’ latest trend. They were so popular you could buy them with a little Eiffel tower statue (“ Special price lady, take selfie with Eiffel tower for cheap price”). They could have made good business if they offered it with tickets to use the public toilet. Noticing the long waiting line in front of them, the toilets were nearly as much in demand as a ticket to climb the tower. The only difference was that nobody took selfies there (although…).

Off to the next touristic attraction. In our case the Notre Dame cathedral. We could already see from a distance the numerous colorful selfie sticks waving by. Dancing around the tourists we tried to take a few photos ourselves, without ruining a selfie by accident. Mission accomplished, on our way to the next stop. Luckily Paris has metros that can bring you quickly from one destination to another. The only disadvantage is you often feel like a sardine in a can. It’s not very appealing to ride along with your face jammed against the window but most Parisians don’t have another choice. They have to be on time for work. I’m happy I chose not to live like this, to live under pressure and to be among hundreds of people who don’t make eye contact but rather stare at their phones. I prefer the tree house and the wild goats!

After a few hours Niko and I felt drained. All we wanted was to get away from the crowd and to curl up on the couch of Louise. We preferred enjoying the company of our new friends then getting lost in a selfie stick jungle. We didn’t see much in Paris. It was hard to get a profound sense of the city. We perceived it as big, busy, gray and a bit impersonal. Not that it’s an ugly place,on the contrary! The architecture and culture is really beautiful. We just feel more at home in smaller cities and villages.

The roof of the Sacre Coeur

Nonetheless we had fun. Our visit to the sex shops was very entertaining. One of the salesman tried to sell me a jewel butt plug. He described it so passionately, I nearly bought one. But the thing weighs a lot, my backpack is already heavy and honestly, I prefer jewels in the holes of my ears…

A special type of jewel …

For many people Paris might be the most romantic city in the world. For us it’s the place where we made new friendships, had lots of fun, got lost in a selfie stick jungle and discovered the existence of the jewel butt plugs.