The moment we arrive in Albania, we notice we are in a different culture. It somehow doesn’t feel like Europe anymore. Unfinished abandoned buildings rule the cityscape. There is garbage lying around with street dogs sniffing through it, men pushing chariots filled with rubbish, fruit and other goodies, cages of chickens on the side of the road, little booths with clothes from last decades fashion, men smoking like chimneys and drinking espresso on plastic chairs,…We have to watch out where we walk because the pavement is filled with holes. This is what we were looking forward to! After spending almost two years in Europe Niko and I were craving to surround ourselves with a different culture. Even though Albania is a European country, to us it feels like we just entered a greener version of Morocco. 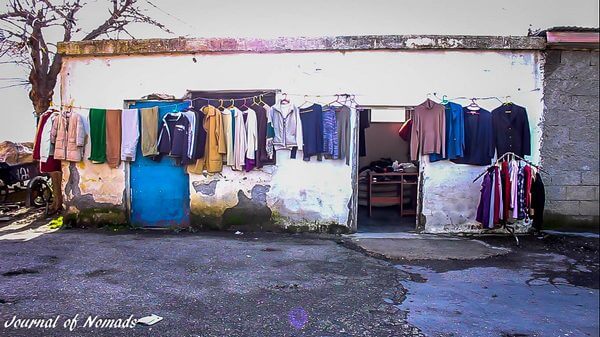 People stare at us while we pass with our backpacks. I feel the curious eyes of the men lingering on me. I don’t like to admit it but for the first time in a long while I’m feeling relieved I’m not traveling by myself. I notice it’s a patriarchal culture and the men rule the streets. I’ve barely seen any women so far and none who are driving a car. I don’t really know a lot about Albania or its culture and the people appear to be very friendly but still, I’m happy that I don’t have to hitchhike by myself.

View of one of the cities in Albania

Albanians don’t seem to be familiar with the concept of hitchhiking. Bus and taxi drivers try to persuade us to come along with them. When we explain we are hitchhiking and don’t want to take a bus or taxi, they look at us like we’re from a different planet. We decide to walk out of the city and try to catch a ride in the suburbs. Soon we find ourselves surrounded by the local farmers. They observe us sticking out our thumbs with as much attention as we watch them walking their cows. None of them speaks a word of English, none of us speaks a word of Albanian. It starts to feel awkward hitchhiking with an audience…

Not a lot of traffic on these back roads!

Another man comes and joins our little group of spectators. He introduces himself as Sokol. He speaks Italian. Finally we’re able to communicate with someone! He quickly understands what our intentions are and explains them to the group. They all want to help us now but don’t really know how so they just stand around and look at us. Pretty much the same as what they were doing before. It’s not really convenient trying to find a ride when you’re surrounded by a group of people. Time goes by and so do the cars without a single one stopping.

Waiting around with a curious audience (cow included)

Our interpreter, Sokol, invites us for lunch with his family. We follow him on a sandy road up the hill. So does our audience and their cows. I feel like we are part of a parade with us as the main attraction. When we arrive at Sokol’s house, our new fans wave goodbye and leave.

The little stone house is painted in light yellow and has its own little vegetable garden. A cute toddler welcomes us at the porch. We follow the girl into the living room. It’s a small room with two couches, a tv and a wood stove which functions as the cooking stove. A baby is sleeping on one of the couches. Not for long. As soon as I enter the room, Sokol hands over the baby to me. I must be good at holding babies because when Sokol’s wife enters the room and introduces herself, she thinks for a moment the child is mine. This misunderstanding causes a lot of laughter and is an excellent way to break the ice!

Teddy bears drying on the washing line in the back yard.

Niko in front of the house

Sokol and Valentina treat us like old friends. They straight away offer to do our laundry. While the washing machine is spinning, they serve us fresh milk (straight from the cow!), homemade bread, fresh vegetables from the garden,… They don’t have much but are so happy to share everything with us. Their kindness and generosity are very touching, knowing that we are complete strangers for them. It’s interesting to realize that the less people have the more they share it with others.

After lunch Valentina serves us a deliciously sweet Turkish coffee. We sit around the little table on the porch. Sokol starts talking about his life. He used to be a soldier in Afghanistan. Now he works as a bouncer in a club at night and helps out on the land during the day. Life in Albania isn’t easy. People have to work hard to earn very little money. A lot of Albanians go to other European countries to work there and have to leave their families behind for several months. It’s sometimes the only option for earning enough money to support their family. The people who stay in Albania work sometimes day and night, like Sokol. The main reason why they work so hard is the thought that one day their children can go to college and have a better future.

Kid playing in the street with his dog

When we finish our coffee we see some of the local kids hanging around the house. They want to take us out fishing in the nearby lake. We leave our bags at the house and follow them. Without Sokol we have no translator. But we manage to speak with gestures. The boys show Niko how they fish with a string attached to a bamboo stick. I stay in the background. I’m aware I’m the only woman around. I haven’t seen any women or girls outside, just man and boys. Although I’ve seen a lot of female students in the cities, here in the small villages they are still more traditional. The women stay at home and look after the household chores.

Fishing with the boys

Photo of us with the kids.

After catching two little fishes Niko and I return back to the house. It’s getting late in the afternoon and Sokol invites us to stay over for the night. We happily accept his invitation. We always enjoy staying with locals, to see and experience their daily lives.
When we say goodbye the day after, we’re left with a feeling of sincere gratitude and love. It was mind opening to be for one day part of an Albanian family. To see how hard they work and live with little and what gives value and happiness to their life. It’s inspiring and heartwarming. We may see many beautiful waterfalls, beaches and mountains but to really feel a country is to connect with its people. A warm thank you to Sokol and his family for giving us this unique experience!

Niko with Sokol and his cousin

18 thoughts on “A taste of the Albanian culture”