Batumi, the second largest city of Georgia, is located on the Black Sea Coast, right next to the border with Turkey. The climate is subtropical and if it isn’t warm and humid, it’s raining. It’s even the wettest city in Georgia. During the past two years however, there has been a significant change in the weather and heavy snowstorms have turned the city into a real winter wonderland! Hello Global Warming! 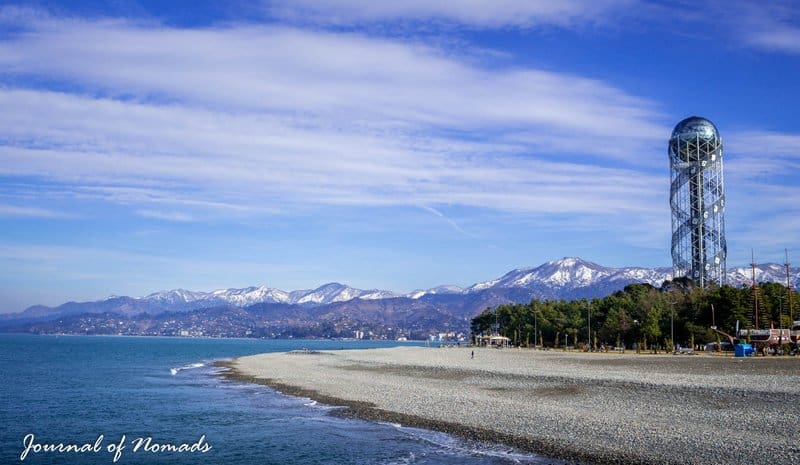 Batumi on a sunny day

Batumi on an unusual snowy day!

Last year on the 31st of December, a heavy snowfall surprised the whole city. In less than one day the snow reached half a meter, which was very unusual for Batumi. You can imagine that this created a lot of problems. The Georgians are used and prepared to snow but not in this area. A typical winter in Batumi means normally a lot of rain and the city barely received any snow during the past 30 years! In some areas the snow even reached one meter high and people were left without electricity for days. The roads were blocked and life in the normally vibrant city stood still for a moment.

The beach a few weeks ago

The park a few weeks ago 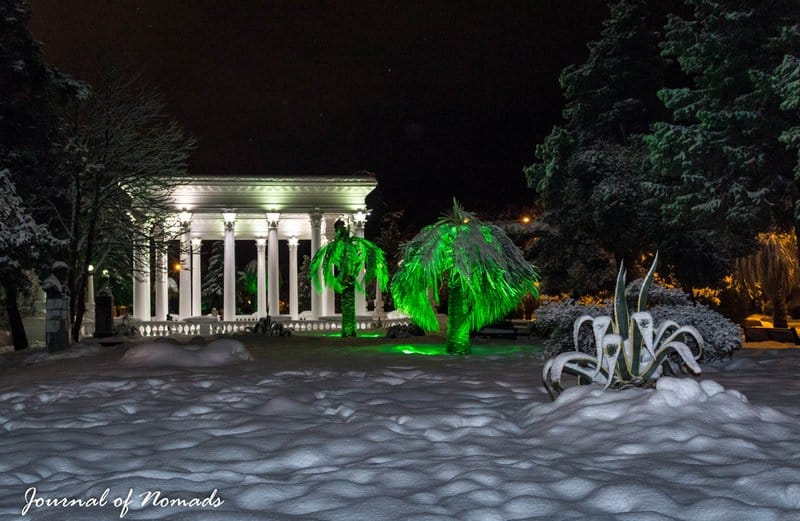 This year the city got covered in another thick winter blanket of snow. We had visited Batumi in the beginning of January and the weather was so warm that we could easily walk around in long-sleeve shirts. When we came back last week, we were welcomed by a heavy snow storm. Not even four weeks earlier we had strolled along the beach for hours while the sun was kissing our skins. That same beach had now an almost knee-deep layer of snow! We’ve seen a lot of snow before but never on a coast that is surrounded by palm trees! 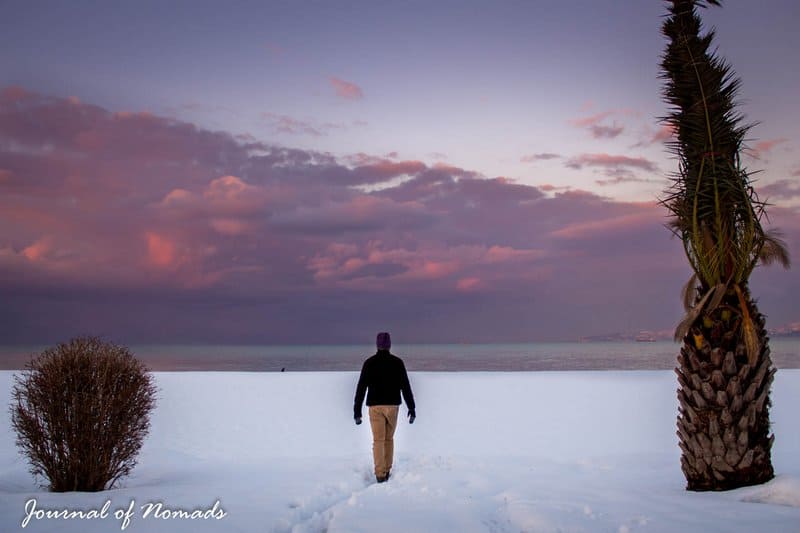 Palm trees and snow, not something we see every day 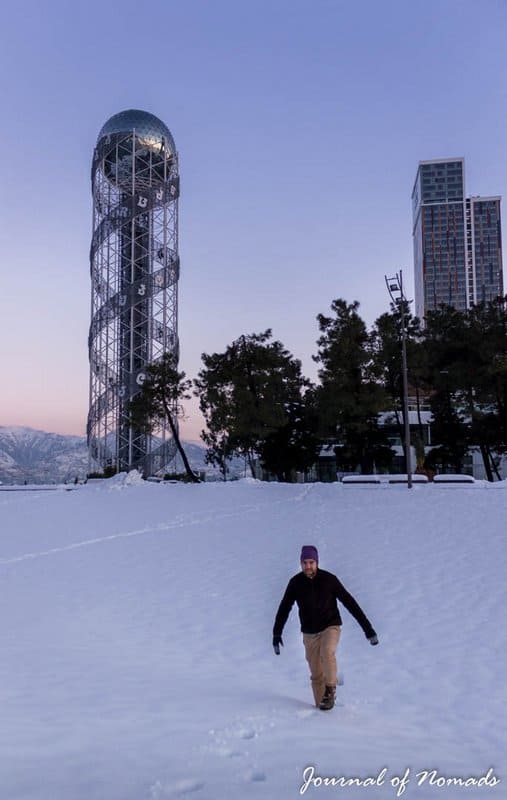 Niko dabbling through the almost knee-deep snow on the beach

At some point it was snowing so heavily that I had to tuck away my camera. Big waves of water rolled and crashed onto the beach, washing over the snow-covered rocks while thick snowflakes were filling the air. Despite the freezing wind it was such a mighty feeling to be there and witness the elements of nature in action! I couldn’t stop smiling, even though the snow was covering my eyes and ears and filling my shoes. Niko and I eventually had to go back to the warmth of our home if we didn’t want to be transformed into snowmen.

Just moments before the air was filled with snow

The snow fun only lasted a few days and as I’m writing this photo journal, the snow is almost completely gone. The inhabitants of Batumi are looking relieved that they don’t have to trudge through it anymore. Drivers can now access their cars again without digging their way through big piles of snow. They can now park and drive smoothly in the streets without getting stuck or slamming into something and/or someone on the slippery roads. We could definitely tell that the people here were not used to having a snow-covered city!

It would take some effort to drive out of here! 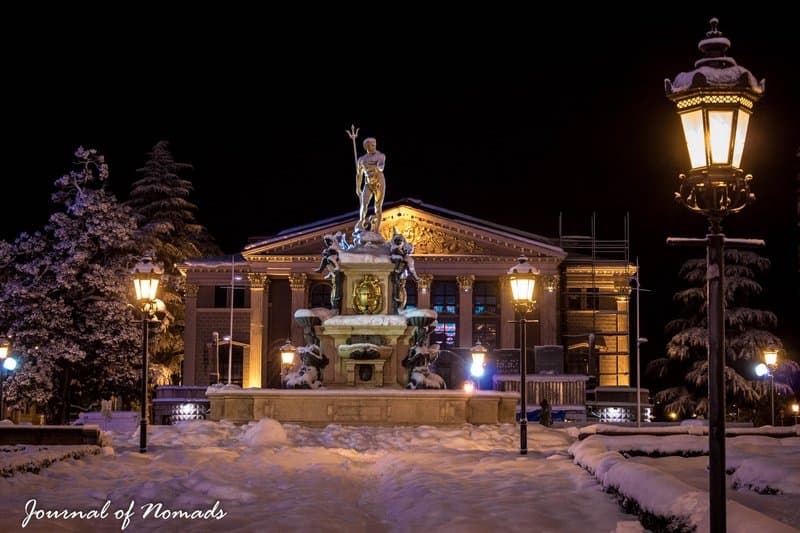 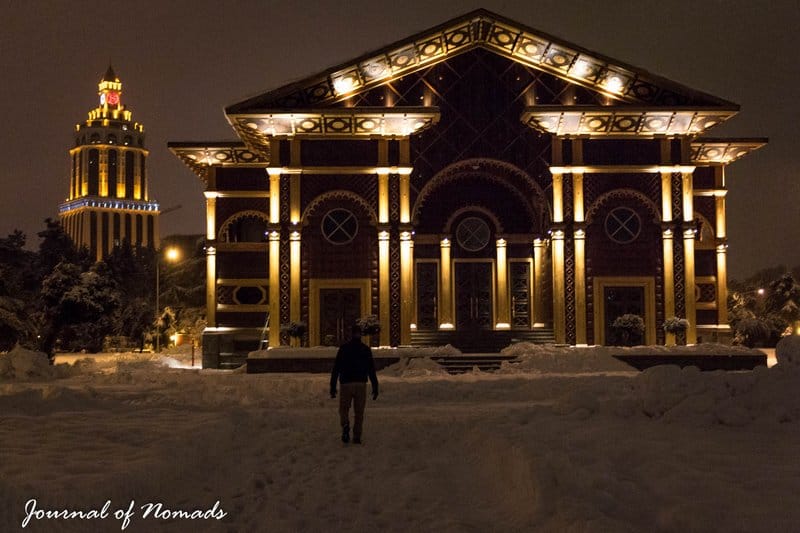 Despite the inconveniences we were very happy that we witnessed the normally subtropical city of Batumi covered in a thick white blanket! The whole city looked stunning! Unfortunately this unusual weather is proof that the climate is changing. I think that this won’t be the last time that Batumi will see snow!

Are you noticing the climate change in your hometown or on your travels?

14 thoughts on “Winter Wonderland in Batumi”