Wondering what the best long distance hiking trails in the world are? Anna from Expert World Travel shares seven amazing overland hiking trails that include everything from spectacular mountain peaks to pearl-white sandy beaches. Some are just a little over 100 kilometers long, while others feature a network of more than 5000 kilometers of hiking trails.

Whether you’re in the mood to spend a week or an entire year hiking and exploring, there are many options you can choose from! I covered some of the best overland trekking routes on each of the continents (except Antarctica)!

The mountains of Nepal, the European Alps, and the great Red Center of Australia are just some of the long-distance hikes I have in mind. Read on to see my top picks for the best long-distance hiking trails in the world, and hopefully you’ll find the one that’s perfect for you!

The Camino de Santiago is known in English as the Way of St. James and it was one of the most important pilgrimage routes in the Middle Ages. As a pilgrimage route, Camino de Santiago doesn’t have an official starting point since it was believed that pilgrimages should start at one’s home. However, there are several variations of the trail, with the most popular ones being the French Way and the Portuguese Way.

It’s also possible to do the hike from pretty much any country in Western Europe, as long as you’re ready for the challenge. In fact, when I did it many years ago, I met a guy who walked out his front door in Belgium and walked all the way to Santiago through summer.

All of the different “Ways” have one main thing in common – their goal is to reach the shrine of apostle Saint James the Great, which lies in the cathedral of Santiago de Compostela in Spain.

The most popular and default route starts in the Pyrenees on the border of France and Spain in a small town called Roncesvalles. It then weaves its way west and takes you around a month in total to reach Santiago.

Another great option is the Portuguese Way, which has two official starting points. You can begin the hike either at the Lisbon Cathedral (610 km) if you’re in for a challenge, or at the Porto Cathedral (227 km) if you’d rather take things easy.

Regardless of the exact route you take, you’re in for the hike of your life. The weather is usually nice, the scenery is spectacular and you’ll be hiking near some of the best scenery in Spain or Portugal, with ample opportunities for mixing with locals or meeting people on the trek.

The Pacific Crest Trail is a long-distance hiking trail from the southern US-Mexico border all the way to Canada. It can be done in either direction, but it’s important to note that it’s currently (in 2021) not legal to enter the US from Canada via this trail.

The 4,270 km trail takes you through 25 national forests and 7 national parks in the states of California, Oregon and Washington. It is closely aligned with the Sierra Nevada and Cascade mountain ranges, and the midpoint point of this trek is Mt. Lassen, where the two ranges meet. The average hiker takes four to six months to complete the trek, but the current record stands at 52 days, 8 hours and 25 minutes.

This is one of the most epic hiking trails in the world, but it takes a lot of preparation and training to complete it. Hazards along the way include everything from grizzly bears to severe weather, so you will have to be ready for everything if you’re thinking about attempting the PCT.

It goes without saying that the sights along the way are spectacular and that the trail is abundant with worthwhile detour opportunities.

The O Circuit in Torres del Paine is the hidden gem of this perhaps overly popular national park in South America. It’s less popular than the famous W Circuit which brings myriads of tourists to the park, but that’s only because the 110 kilometers of the full circuit pose a challenge to non-experienced hikers. The W trail is actually part of the entire circuit and it’s the only segment of the trail where you’re likely to encounter the majority of people.

This trail makes a complete loop of the mountains in the middle of the park, offering extraordinary views along the way. It takes about 7-10 days to complete this hike, depending how fast you walk and how much of the area you want to explore. When we did the trek a few years ago, we took 10 days to do it, and stopped to enjoy the jaw-dropping views along the way.

Trail highlights include Dickson Lake, Glacier Grey and French Valley, to name a few. And of course, we have to mention John Gardner pass, which is the most challenging part of this whole circuit. It’s the entire reason why the trail is hiked anti-clockwise – if you were to do it in the other direction, you’d find that the pass was just too steep to climb.

However, if you are an experienced trekker then this hike is actually relatively easy. Although you have to take all your food, there are some small shops along the way to supplement at.

Via Alpina is a network of trails that combines five long-distance hikes through the Alps that start in Slovenia and end in Monaco. It’s one of the most physically demanding long distance hikes in Europe, and it’s definitely not suitable for people who don’t like cold weather!

The entire network is over 5000km long and takes nearly a year to complete. The Red Trail is the longest of them all – it starts in Trieste and ends in Monaco, passing through Austria, Germany, Liechtenstein, Italy, Switzerland and France on the way.

This spectacular trail features 161 day stages that take you on a journey through the Alps. It runs along the edge of Europe’s tallest peaks, and you can always go on a quick detour if you’re in the mood for a spectacular view. Keep in mind that it’s almost impossible to complete the hike in a single season due to snow and ice. And as someone who lives in Switzerland, I can tell you that early in the season (May, June) will often be an issue as the trails are closed or covered in snow.

Also, this leg of Via Alpina features some of Europe’s most magnificent scenery. Along the way, you will see anything from wooden chalets to lively towns, and you will get to experience the cultures of eight different countries. If you’re looking to get to know Europe better, hiking some 2,500 kilometers through the mountains is a great way to do it.

The Annapurna Circuit is one of the most popular long-distance treks in Nepal. The total length of the trek is between 160-230 kilometers, depending on which sections of the trail you do. Most hikers complete it in 15-20 days, even with detours and summit ascents.

A great thing about the circuit through Nepal is that it’s not a physically demanding hike, except for the altitude. On top of that, in most cases you will go with a guide and porters, so you will only be carrying a day pack.

The Annapurna trek was voted as the best long-distance hike the world several times, and it’s hard to disagree. It combines a wide variety of climate zones and landscapes, offering some of the best views of your life along the way. The circuit is also a great way to learn more about Hindu and Tibetan cultures as you pass through the villages along the way, interacting with locals.

You can also do a shorter version of this trek, which we did, called the Jomsom trek, which is the western half of the trek. The only thing to keep in mind is that you need to either take a plane or jeep out once you have finished.

October to November is the best hiking season for the circuit – the recent monsoons refresh the trail, the weather is generally warm (during the day) and visibility is excellent, which is key for seeing the spectacular peaks above.

The Larapinta Trail is a spectacular long-distance hike through the Australian desert. It’s divided into 12 stages and takes about 12-14 days to complete, covering some 220 kilometers in the process.

This trail starts in Alice Springs, which is thought to be the central town of Australia’s Red Center. It passes through West MacDonnell National Park, where it crosses many of the other trails within this NP. The trek goes through the national park on the way to Mount Sonder, which is the final point of the hike. Some of the highlights of the trek are Simpsons Gap, Standley Chasm, Hugh Gorge, and there are dozens of other sights worth your time if you just go on a quick side trip.

This hike is rated as one of the top 20 long-distance treks in the world, because of the spectacular views along the way. Australia’s desert is truly something else, featuring hundreds of different species of flora along the way, as well as ancient igneous and metamorphic rocks.

The DGT is one of the best long-distance hikes on the African continent, if not the entire world. The point-to-point trail starts at Sentinel Car Park and goes on for about 200 kilometers, all the way to Bushman’s Nek. This trek largely follows the outskirts of Drakensberg Park in KwaZulu-Natal province, featuring forests, wildflowers and breathtaking scenery along the way.

Also, this is one of the more demanding overland treks featured here and not just because of the length. The terrain is very rocky at times, with scramble on multiple segments of the trail and even more shrubbery and river crossings. The trail mostly goes through wilderness, with very little marked trails of camping facilities.

This means you will have to be experienced and well prepared to get through all 10 days that it takes (on average) to complete the hike. If you’d like to explore the surroundings and go on side trips, plan to cover the DGT in about 15 days.

See all my Hiking Guides for more hiking inspiration!

Anna was born to travel the world having studied languages all her life. Although she has traveled the world, she now calls Switzerland home and spends her time writing about her experiences on Expert World Travel. You can follow her on Facebook, Twitter, and Pinterest. 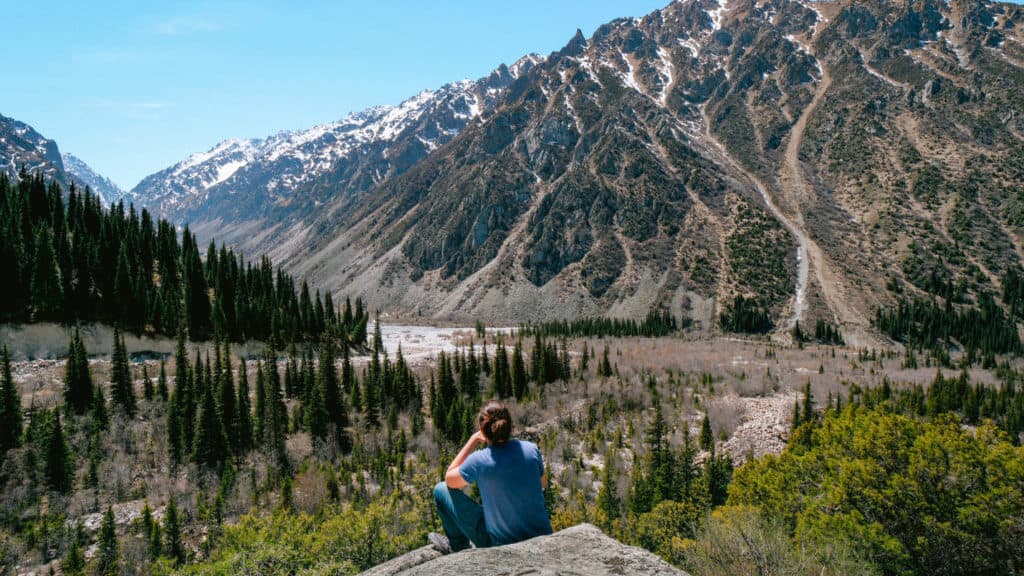 Things to do around Bishkek: 8 great day trips and hikes

Hiking near Osh in Kyrgyzstan – Be a Nomad Hike

The Complete Guide to Imlil and Hiking Mount Toubkal in Morocco