Our friend João Sousa wrote a tale that is very recognizable for every traveler!

Hello, I’m João, 38 years old and born in Portugal. I’m probably one of the least traveled men you are likely to meet.

Back in 2014, I was living in the south of England, worked in a university, had a stable job and was planning to get married with my long-standing girlfriend. I was ready to settle for good. And then, in the space of a month, everything changed. The relationship was over and I got downgraded in my job. My stable and predictable life got turned upside down. And that’s when I decided that I would work for a year, recover mentally and financially and prepare to travel indefinitely.

Many things happened during that year, including going to counselling, finally coming to terms with child abuse trauma, networking and learning from travelers and last but not least, falling in love again just to find myself yet through another painful break-up.

In August 2015, I said goodbye to my job, my friends and finally my family. Then I realized that – with so many available travel options – I was stuck in indecision. I also realized that I had never hitchhiked before or camped on my own, for that matter… Fortunately – before I started thinking too much until the point of giving up on the whole project – I hit the road. Just like that. Backpack, sleeping bag, tent and camera and off I went.

I went from Lisbon to Porto, from Porto to Guarda, camped alone for the first time in the mountains and crossed the border to Spain. I was hosted by an incredible couple I met on the streets of Salamanca at midnight.
After Salamanca, I ended up living in a farm in a small village with an artisan who did stunning works with leather.
I traveled across Spain towards Granada. I found hitchhiking and couchsurfing in Spain to be very difficult, but I turned that into a positive thing – taking my time appreciating the stunning landscapes, slowly getting to know the people and improving my Spanish.

I walked for many days between Córdoba and Granada, discovered ancient Arab villages and some of the most generous people I had ever met. I was given money, food and shelter by total strangers. I could not believe this was Europe.

In Granada I met this German man called Oli who needed work done on his website and I stayed with him and his family for two weeks. He lived in an idyllic location in Sierra Nevada, called Órgiva, a place I didn’t even know it existed before I got there. I became part of his German community, even though I didn’t speak German. One day, a close friend of his invited me to stay with her and work on the olive harvest. I stayed in her farmhouse for almost a month. I absolutely loved the experience but became increasingly attached to that place and her family. It was time to make a move again. While I was deciding which way to go to reach France I saw Africa for the first time when hiking the Alpujarras. It was right there. I simply had to visit it.

For a week I walked along the Mediterranean coast from Torremolinos to Tarifa with the occasional short car lifts.
When it was time to cross the Mediterranean to Morocco, I only had a handmade map by my friend Oli and two names: Tangier and Arfoud. I knew nobody in Morocco and didn’t speak the languages. To make things more interesting, friends and family were trying to persuade me not to visit Morocco, an Islamic country, due to the potential dangers of terrorism. The devastating attacks in Paris were still fresh in everyone’s minds.

The moment I set foot in Morocco I realized how unprepared I was. It felt like a different planet! After 13 hours of bus journey, I found myself in deep Morocco at 3 am. It only took one day to fall in the hands of a group of false guides. They took me to the desert and tried to make as much money as possible with me. One night I left the false guides and the desert behind and planned to escape Morocco for good. One week on and I had had enough of this crazy country. But it was when I decided to leave that amazing things started happening. Incredible acts of kindness and random friendships with glorious landscapes as a backdrop. I was gradually becoming acclimatized to Morocco and actually enjoying it. So I changed my mind and carried on exploring this country.

A month later I found myself in Ouarzazate, where I met a Portuguese man who, unlike me, was a seasoned traveler with a respectable number of countries under his belt. He challenged me to find my way to Chineguetti, in Mauritania. And so I did. I hitchhiked southwards across the Moroccan Western Sahara  (a very different atmosphere from the rest of Morocco I knew), crossed the border and entered Mauritania, a country I had heard terrible things about. Suffice to say, I continued meeting incredible people with infinite kindness towards me. I hitchhiked the infamous Iron Train (a hell of a ride, which I totally recommend to any traveler wanting to step out of their comfort zone). Eventually I reached Chineguetti and stayed there for a while before making my way back to Morocco.

If Morocco was a shock to my system, Mauritania was simply a bizarre and wonderful experience. A mysterious country filled with incredible human contrasts, a surprising variety of languages and deserted landscapes that invoke a sort of poetry of desolation. A country I promised myself I would one day go back to by bicycle.

Going back to Morocco felt like returning to familiar ground, but this time I would explore the north and the imperial cities. The experience was very different and yet the humanity and hospitality were always present. As I traveled northwards, it became increasingly harder for me to leave Morocco. I realized that four months had past since I had first arrived to Africa and that the idea of returning to Europe would be a painful experience. But I had to continue my journey, so shortly after I reached Tangier I got on a ferry and crossed the Mediterranean to Genoa, Italy.

Morocco and Mauritania were an unexpected detour, but an incredibly rewarding travel experience. It tested me in unimaginable ways. I never had a single dull moment and rarely felt alone, as there was always someone to help out. I made extraordinary friends, some of them surely friends for life. I hitchhiked trucks, buses, motorcycles, trains, donkey carriages, slept in petrol stations, mosques, caves, deserts, oasis, on the street, lived with farmers, shepherds, drugs addicts, drugs dealers, police officers, doctors, engineers, nomads, rich people and people who have nothing. I also had the chance to see another side of Islam that isn’t usually portrayed by the European and American distorted and biased negative media.
The level of humanity I witnessed in Africa was moving and humbling to the point of sometimes making me cry.

My current project is to cross the Balkans region all the way to Turkey. For some mysterious reason I felt the urge to explore this area of Europe which I am completely unfamiliar with. I have never been to any of these countries and don’t speak the languages. I am aware of the many perils a journey like this might entail, but I am still determined to go and give it a shot.

After half a year on the road I feel even more lost than before. I still have no idea what I want to achieve or where I will end up. But traveling like this made me realize that wherever I go, life works itself out. I’m able to find amazing and interesting people along the way and enjoy their company while I travel. I see stunning landscapes, witness moments of unbelievable beauty and test my limits. I step into the unknown every single day and learn to cope with it. Sometimes it works well, sometimes it doesn’t. And that’s OK.

I still get the occasional wise advice by my wise friends about how I should settle soon, find a career, get married and have kids because I’m almost 40. But I feel that the right time hasn’t come yet. Maybe it never will. I’ve simply stopped worrying about it.

To finish off this long written piece, here’s a short little episode that happened when I was still in Spain: I hitchhiked my way out of Sevilla and wanted to reach Córdoba by night-time. However my ride only took me as far as a place called La Carlota. I was dropped off at a petrol station. I entered the restaurant which was about to close and asked if I could recharge my phone battery. I sat down and a few minutes later, a waitress came over and asked me: “Quieres bocadillos?” She was asking if I wanted food. I declined. She insisted: “It’s on the house.” I took the gentle offer and had her delicious food. Before they closed the restaurant, she gave me a lift to a petrol station nearby that stays open 24 hours a day. I took a picture of her so I could remember her face. She said: “Poneme guapa (make me look cute).” I didn’t have to; she already was more beautiful than anyone I could imagine.
I never wrote her name down, but one day I might go back to that restaurant and find out… A list of the best and most inspiring travel books, awesome travel series, feel-good... 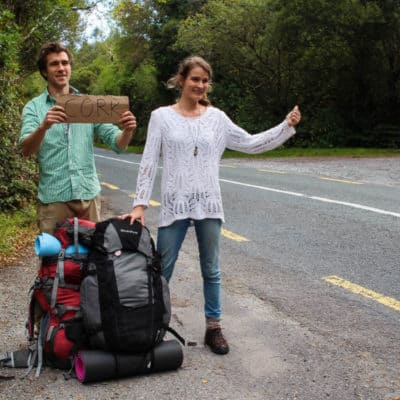 Am I really ready?   The day that I had been looking forward to for... How to make money while traveling the world? Is it easy to find travel...

Although we had some misadventures along the road, North Italy was an interesting journey for...