Whenever Niko and I tell our friends how we met, they react with amazement. That’s why I decided to share our story with you. I bet everyone likes a good love story (even the ones who don’t want to admit it publicly), especially when it’s an uncommon one! Let me tell you how Niko hitchhiked into my life. 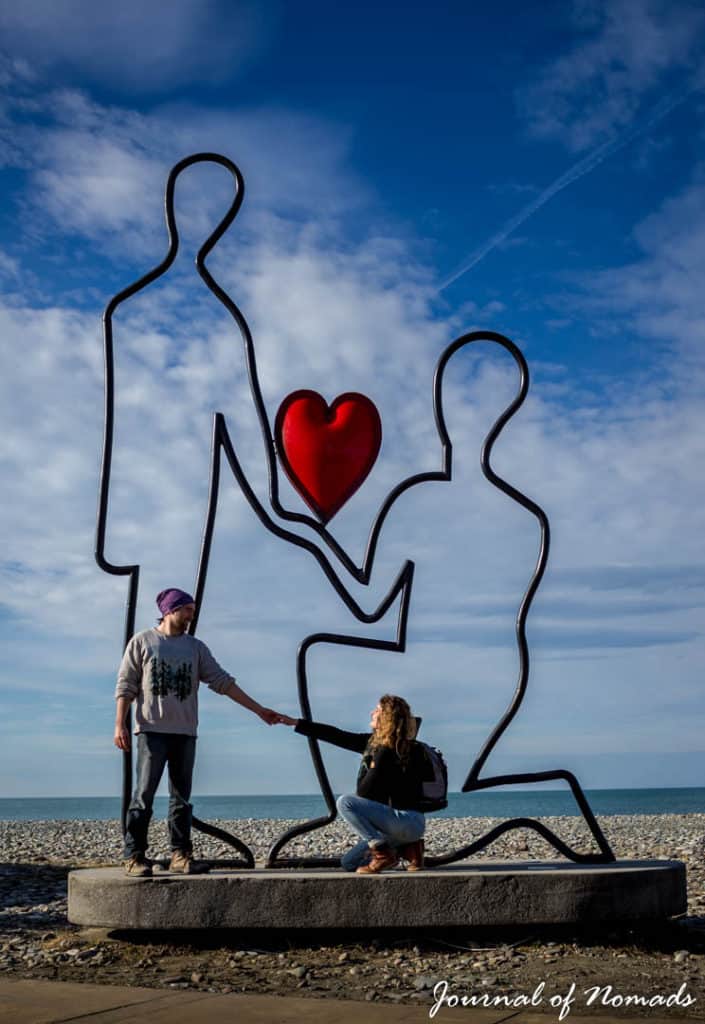 It was the summer of 2014. I was staying in a caravan of friends in Ireland. They were helping me getting back on my feet. I was recovering from a broken heart, had no idea what to do next and I had barely any money left. Not the best place to be in!

Traveling around the world sounds glamorous but there are moments when it can be hard, especially when you have no sense of direction or no money. I think we’ve all been there before. There is a famous quote: “Sometimes you have to get lost to find yourself”. And it’s true, sometimes you have to hit rock bottom to find out what you want to do with your life!

It wasn’t necessarily the broken heart that made me feel lost. It was not knowing what path I wanted to take. I was tired of traveling without a direction. The first years of my nomadic life had been fun – going to far away places, meeting lots of people, having plenty of adventures – but after a while, I had the feeling I was walking around in circles.

I had to start over in every country – arriving alone, finding a job to earn some money and finding a place to live for a while. Of course, I kept visiting beautiful areas and made new friends but I felt those trips lost their magic. I kept ending up being broke and alone and I had had enough of it! Traveling without a purpose is like living without a purpose or direction. It loses its meaning and it becomes superficial, boring and empty.

The previous year I had tried to live a more settled life in the UK with my partner but I had felt a restlessness. Although I was tired of traveling without a goal, I started to miss my life on the road. I thought I just had the post-travel blues. I could fool my mind but in my heart, I was still a nomad.

What does life do when you’re not following your path? It gives you a really big smack in the face! My relationship came to an end. At first, I was angry and heartbroken. I didn’t have a clue about what I should do or where I should go. In an impulse, I decided to visit friends in Ireland. They had a beautiful little retreat in a forest called Temple Grove and I was welcome to stay in their caravan for as long as needed to get back on my feet.

The cottage in Temple Grove

The beautiful garden of Temple Grove 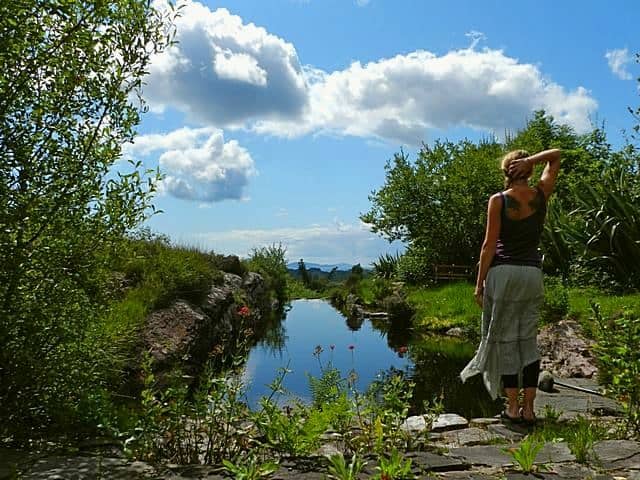 Enjoying the view near the natural swimming pool

So there I was, tucked away in the little colorful caravan, reflecting and contemplating about what I wanted to do with my life. I was turning 30 and I felt it was time to stop walking around in endless circles and start creating a direction for myself.

My friends lent me a book called ‘Ask and It Is Given: Learning to Manifest Your Desires

‘by Esther and Jerry Hicks. In that book I read about the importance of knowing what you want, having clear intentions and how to manifest dreams into reality. One of the steps was writing a wish list (you can compare it with writing a letter to Santa Claus when you were a child). I decided to try this out.

On my 30th birthday, in the company of a bottle of red wine, I made a wish list. The first thing I wrote was that I would realize my dream of being a writer. I had been dreaming of this since I was a child but never put those thoughts into action. I had also dreamed of being a photographer. I had played with my camera for years but now I wanted to take my photography to a professional level. I realized that I could start a website to share my stories and photos and it could serve as a purpose within my travels.

I wanted to go overland to Africa or Asia. It sounded like a fun challenge! I also wished for a travel partner. I had traveled solo for years and I felt I would enjoy this adventure more with a partner who was on the same level as me, had the same travel experience and wanted the same things that I did. And to finish my list, I wanted to learn more languages, especially Spanish.

It didn’t seem impossible to manifest my wishes. I just had no idea where to start. I was living on my last 100 euro so I definitely needed to find a way to earn some money. I decided to have faith that things would somehow work themselves out.

A few days later I received an email from a friend. He was a traveler who my parents had picked up in Calais (France) in the summer of 2013 while he was hitchhiking. They had invited him to their house and he had even slept in my room while I was working in a hotel in the French Alps.

I only spoke once with him on the phone when my mum told me they had a hitchhiker in their home. We became friends on Facebook and every now and then we would have a short chat about where we were in the world and what we were doing there. In his latest email, he told me that he was going to Lyon in France to earn some money grape picking and he invited me to come and join him. You might have guessed it already, the name of this guy was Niko.

It sounded romantic, picking grapes in the French vineyards. I had never tried it before. It would also be fun to finally meet Niko. I decided to let the idea rest for a while and went for a few days to a little music festival in the nearby village. While there I met some French travelers who started talking to me about grape picking and how it’s a great way to earn some extra cash. A couple of days later I met a Dutch traveler. When we were talking about jobs, he advised me to go grape picking. He had done it before in Lyon and he loved it. Was this coincidence or was the Universe trying to tell me something? I decided to take it as a sign. That same week I sent Niko a message I would meet him in Lyon.

About five weeks later we saw each other for the first time. During our first hour together Niko told me about his plans of hitchhiking to South-Africa. He wanted to document the whole trip by making a web series. He was looking for someone who loved being behind a camera. When he asked me if I wanted to join him on this adventure, I didn’t think twice. It might seem very impulsive and naive, going on a big journey like this with someone who I barely knew. But it felt so right to do this. This is what I had wished for on my birthday! And this is how the story of Journal of Nomads began.

After the grape picking, we went to Ireland where we worked and prepared for the journey. We had initially planned to stay there for three months but ended up staying for eleven months. We lived together in the small caravan in Temple Grove (yes, the same one where I wrote my wishlist), worked side by side to earn money and made a website. During that time our love for each other grew and we decided not only to hitchhike to Africa but across the whole world.

working side by side

Call it the Universe, God, magic or whatever you want, but this is how life responds when you choose a direction, set clear intentions and dare to follow your path! Writing a wish list can also help…

To be really honest, not everything on my list came true: I still don’t speak Spanish. I got way too distracted learning Turkish instead.

Do you have or know an uncommon or beautiful (love) story? Let us know in the comments below!