It covers information on what is required to become certified, what it is like participating in a course in Japan and what it is like working within a Japanese ski school.

If you’re interested in becoming a ski instructor in Japan, read on!

To travel is to truly live. Or at least that’s how the saying goes. There is no denying that international travel is something I feel everybody should experience, at least once in their lives.

Traveling, however, can be expensive, and continually funding it can be problematic.

My goal at the beginning of 2019 was to save up as much money as I could and head off on an adventure somewhere towards the end of the year. At that point, I didn’t know where that would be but I was motivated to make something happen.

During one of my ‘travel planning’ sessions, I stumbled across an opportunity to become part of a ski instructor internship in Japan.

As a keen skier and general lover of Asian culture, it piqued my interest, and after some emails and an interview, I was selected for the position. 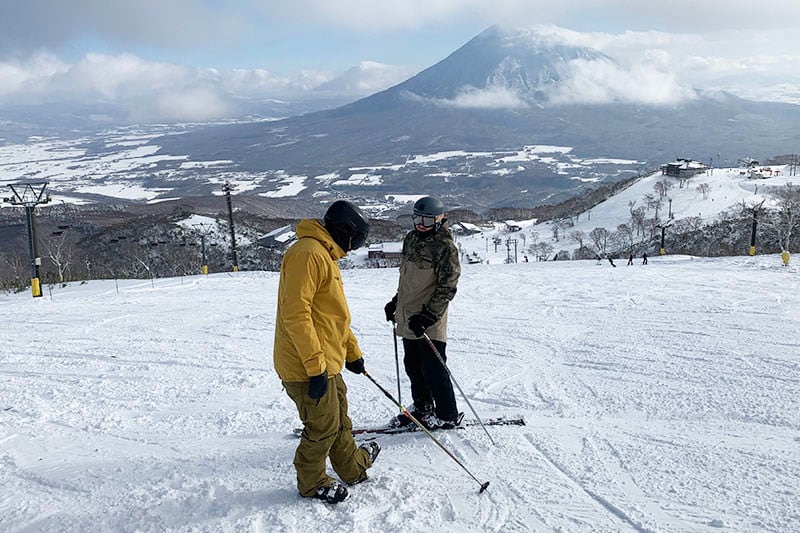 Whilst you can find lots of information about ski instructor internships online, especially through the providers that run them, I thought I’d share more about my personal experience. To try to give a true account of what it is like to train, qualify and work as a ski instructor in Japan.

To start off you’re probably wondering, what exactly is a ski instructor internship?

What exactly is a Ski Instructor Internship?

In my case, the internship was in the Japanese ski area of Niseko!

Much like a general internship in any line of work the opportunity included a period of skilled training followed by a secondary period of paid employment.

Famed as the ‘Aspen of the East’, Niseko had always been high on my bucket list of places to ski. A bustling Japanese ski town set to the backdrop of one of the world’s most iconic volcanoes, Mt Yotei.

How is the hiring process to become a ski instructor in Japan?

Before being selected for the internship there was a hiring process with predetermined criteria I had to meet.

I was surprised to find out that having 4-5 weeks of current ski experience was adequate, and that trainee instructors don’t necessarily need to be at expert level to be successful.

As well as having a certain level of ski ability, I undertook 2 casual phone calls and a relaxed telephone interview with the training provider.

Once accepted onto the program, I was given assistance on how to apply for a suitable work visa, choosing the appropriate equipment required for the program, and booking flights and insurance.

Once the admin was finalized the countdown began…

My journey to becoming a ski instructor in Japan

It was mid-November when I reached the departure lounge of London Heathrow.

Having previously joined a Facebook chat group with other interns on my course, I was excited to meet some of the those that were on the same flight – we met up and grabbed a pre-flight beer in a Wetherspoons pub, as you do!

After a slightly rushed connecting flight from Tokyo to Hokkaido, we touched down at New Chitose Airport in Sapporo. After collecting our ski bags and luggage, we were met by a crew member from WE ARE SNO, the company that runs the instructor internships.

Once everyone had arrived, over 20 of us in total, we jumped on a private transfer and headed towards the mountains, where we’d train and work for the next few months.

Upon arrival, we settled into our accommodation, which was included in the internship package. A spacious ski lodge located in the heart of the main town which was perfect as our HQ.

We had the next few days to ease ourselves into resort life, which included collecting our season lift passes, going out for some delicious meals, and intro (off-snow) sessions with our ski trainers.

Our ski instructor training started on the fourth day, and while I have never been a huge fan of traditional education, I found it much easier to enjoy the learning process on the slopes.

Instructor training was split into two components, technical skiing and teaching. In our group, there were eight interns in total and we spent the next twelve days working on our overall ski technique.

I found the teaching element relatively easy to adjust to, having previously done some coaching qualifications at school. In the evenings, we’d socialize, visit restaurants, go to bars and make the most of living in the mountains.

Once the training period was complete, I was feeling well prepared for the level 1 instructors exam.

We were working towards the New Zealand qualification which is five days in duration and would test us on everything we had been working on since our arrival.

On the afternoon of the final day, we were given our results and all the skiers in my group passed, which was a relief.

Now that we were all officially qualified instructors, we would be offered employment with one of the biggest and most reputable schools in the area.

Japan had by far exceeded my expectations, having done my initial research on Snow Season Central. From the friendly airport staff to the warming bowls of ramen, it was unlike any place I’d visited before.

And while the early snow had been slow to arrive, when it does snow in Japan, it doesn’t seem to stop. Several days in a row we’d be waking up to 30cm+ of fresh powder.

Many people still don’t know much about Japan as a ski destination, but with over 600 resorts and amazing snow conditions, it’s up there with the best in the world.

A few days after passing my exam and being offered a full-time position, I was trying on my new instructor uniform. The Christmas period was rapidly approaching and we would be busy with lessons with the school virtually booked out.

My first lesson was with two Singaporean children, aged 7 and 9 who spoke great English. It was amazing how quickly they seemed to pick up on the basics and how happy they were when they started linking turns.

I also found it very rewarding to be introducing the next generation of skiers to the sport I loved. Over the next few weeks, I was teaching a lot of lessons, both children and adults of varying ability levels.

My hourly wage for teaching started at ¥1,800 but could go as high as ¥3,800 if I was personally requested.

I found myself extremely busy during the Christmas, New Year and Chinese New Year periods with plenty of time to free ski and enjoy the local area during the quieter times.

Now that my winter in Japan has come to an end I plan to use my qualifications to work in the ski industry in the southern hemisphere.

One of the most appealing aspects of the ski internship is that my instructor certification is internationally recognized and valid in lots of countries including; Canada, Australia, Japan, New Zealand, Switzerland and many more.

I can’t wait to advance through the levels and see what the future holds for my ski career. 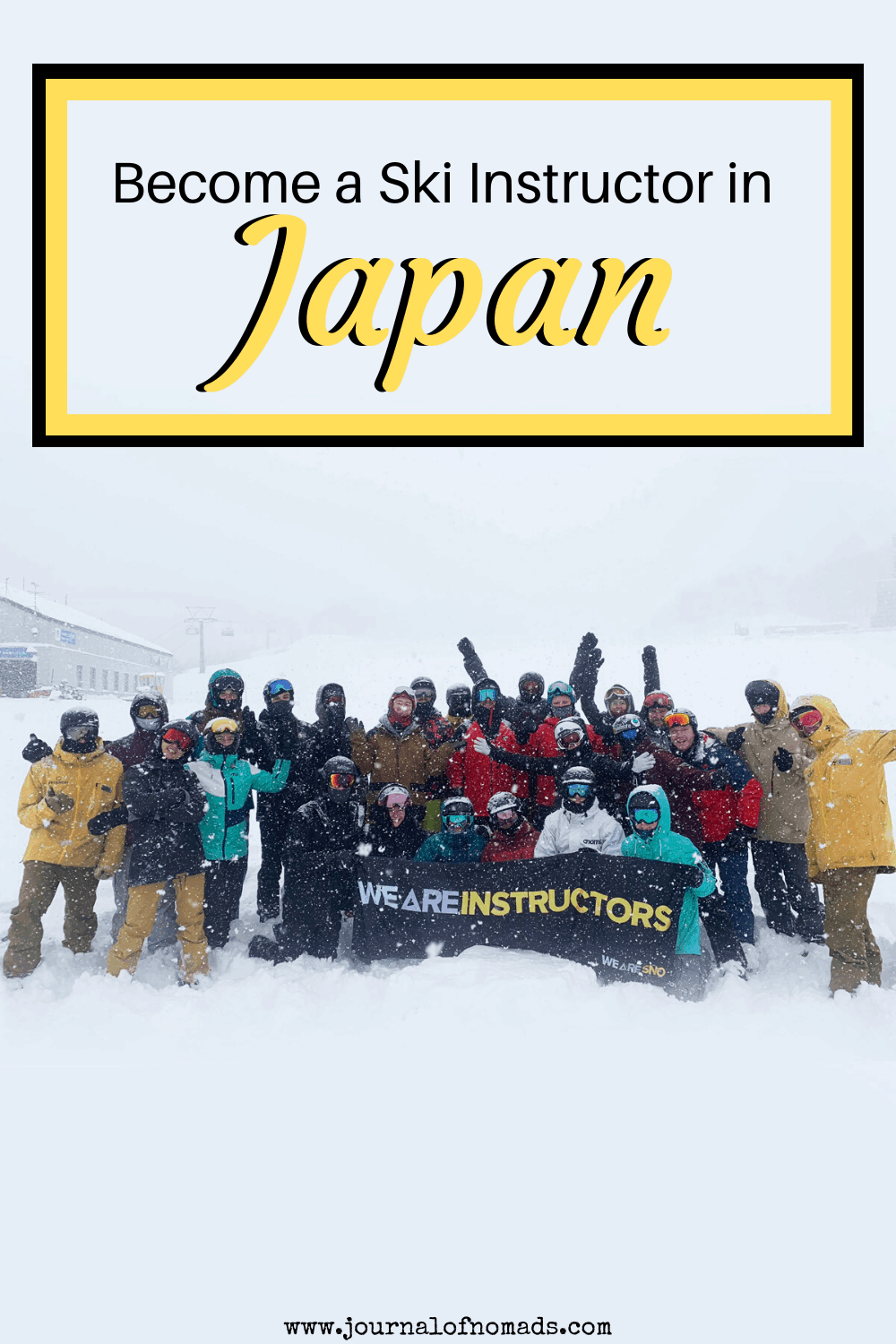 This article was written by Tim Downs. He’s a passionate traveler and certified ski instructor that loves to explore and immerse himself in unique cultures. He’s following a lifelong dream of traveling the world with his skis, hoping to work on snow in as many countries as possible.