Georgian food is some of the best food we’ve ever eaten! We tried nearly all the dishes from the Georgian cuisine and made an overview of the 10 most delicious dishes you absolutely have to try on your trip to Georgia!

Food is an important part of cultural heritage and national identity. We always love to try the traditional food of a country.

Since not many people know much about Georgia – we’re planning on changing that – I decided to write a yummy post about Georgian food and the local cuisine.

The Georgians are very hospitable people. Whenever they invite you for a meal – which happens often – you won’t leave the table feeling hungry.

We often got invited for dinner by Georgian friends and every time we finished our meal – which would usually take a couple of hours – my belly was bursting out of my pants and I had the feeling that my boyfriend could roll me home like a ball.

He never had the energy to do that because he was also wobbling home – although, that might have been due to the extensive consumption of delicious Georgian wine.

After an evening like that, we were always thinking we would probably skip breakfast, lunch, and maybe dinner the day after! My mum definitely doesn’t have to worry about me dying of hunger in Georgia! 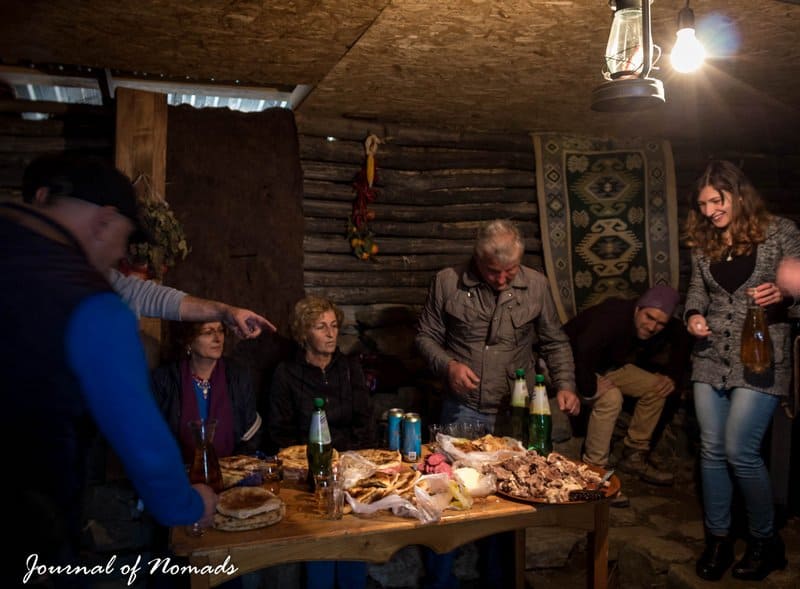 There’s always an abundance of food and drinks when you’re invited in a Georgian home!

So what have we been eating in Georgia in the past five months? Here’s an overview of our favorite Georgian food and dishes!

* Note: not all the pictures are mine as I was mostly focused on eating the food instead of taking photos of it… Proper attributions are given to the rightful owners below the pictures.

The Best Georgian food – Top 10 dishes of the Georgian Cuisine

Khachapuri is one of the most popular and traditional Georgian dishes. It’s a gooey cheese-filled bread that looks a little like pizza.

Rich in carbohydrates and dairy, it could cause a lot of trouble to lactose-intolerants but they might find the cramps worth it because it’s finger-licking delicious!

There are three different kinds of khachapuri. The standard one is the Imeruli khachapuri.

As soon as it’s served, you have to swirl the ingredients together with your fork until the egg and butter are completely blended with the mass of cheese. Then tear a piece of the bread and dunk in!

Tip: always order a small one to start with. I’ve never been able to even finish the smallest size but loved every bite of it!

Khinkali is another iconic Georgian food. It resembles the soup dumplings you can find in China but they aren’t the same, thanks to the distinctive use of Georgian spices.

Khinkali are artfully twisted knobs of dough stuffed with spices and lamb, pork or beef. They are served boiled or steamed. When the dumpling is cooked, the meat juices are trapped within.

The proper way to eat them is to grab the dumpling from its topknot, turn it upside down and take a small bite from the side. Slurp out the juice first before eating the rest.

This way you’ll be able to eat the khinkali without getting covered in meaty juices (talking out of experience). Don’t worry if you’re a vegetarian, they also serve khinkali with potato, cheese or mushroom fillings.

The first time I saw churchkhela, I thought it was some kind of decoration. Maybe people liked to hang colored sausages in the front windows of their stores? I later found out that it’s a traditional Georgian candy.

The main ingredients are almonds, walnuts, hazelnuts or sometimes raisins that are threaded onto a string.

The string is repeatedly dipped in concentrated fresh grape juice which dries into a chewy gelatin-like coating around the nuts. It’s packed with protein and sugar and it’s often served at home with coffee.

A healthy candy for a sweet tooth like me!

Badrijani Nigzvit is a Georgian food that consists of fried eggplant rolls with walnut (sometimes mixed with garlic) filling. I’m not a big eggplant fan but I love this dish!

It tastes sweet and salty at the same time and it’s a dish I would definitely add to our usual spaghetti and egg fried rice meals on the road!

Lobio (which means kidney beans in Georgian) is a mix of bean soup and various kinds of cooked or stewed beans.

The taste of this Georgian dish varies depending on if it’s prepared with coriander, walnuts, garlic, or onion. There are many varieties of lobio, depending on the region you’re in.

When we were living in Tbilisi, our landlady often knocked on our door to hand us a big bowl of lobio which we gratefully devoured!

You might see the resemblance of the word Lobio with Lobiani. Lobiani is a bean-filled bread.  It looks like an Imeruli khachapuri but with beans instead of cheese.

The bread is baked in a wood-fired oven and when you bite into it, you’ll first feel the crispy texture of the bread on your tongue but wait until you taste the spiced, bacon-scented beans! A real mouthgasm!

Mtsvadi, also called the dish of kings, is an extraordinary Georgian food. The preparation is a ritual on its own.

Mtsvadi, made with chunks of pork, mutton or veal, is first abundantly marinated in pomegranate juice or rubbed in a good dose of salt before it’s threaded onto a skewer and roasted on an open fire.

Warning: you’ll definitely be reaching for a few glasses of water (or wine) after eating this tender and juicy meat!

Threading the mtsvadi on skewers

Sacivi is a chicken dish served with a thick sauce containing onion, garlic, walnuts, spices and herbs. This Georgian dish must be prepared in advance and chilled for 24 hours before it is served.

It has a particular taste, especially when some coriander is added, but definitely worth trying!

I always loved to fill my plate with sacivi especially after eating a load of cheesy dishes.

You better first taste kuchmachi and then know what it is made of… Well, I’m going to tell you anyway but promise you still give it a go.

Kuchmachi is a traditional dish made with the heart, liver, kidneys, spleen and sometimes lungs of pigs, young beef or chicken.

The one I ate had only liver in it. It’s often served with walnuts and garnished with pomegranate seeds. It might not sound so tasty but it’s definitely worth trying!

Kharcho is a traditional Georgian beef soup made with chopped walnuts, rice, cherry plum puree and often served with coriander. The soup has a spice mix that depends on the region of Georgia where it is prepared.

It’s a hearty dish and definitely a good meal to have on a cold winter night (which they have often here in Georgia).

All these delicious Georgian food often come with side dishes.  Here are a few side dishes we can’t forget to mention:

3 Popular Side Dishes of the Georgian Cuisine

Tkhemali is a sour plum sauce that is often served with cheese, meat or even fish dishes. Every family has a jar of this sauce in their house as it’s also said to be a cleanser.

I don’t particularly like the sour taste of this sauce but ever since Niko has had a taste of it, there’s been a bottle of tkhemali in our backpack…

Puri means bread in the Georgian language (remember khacha – puri). You’ll often see people walking around with several loaves of this huge flatbread that has the shape of a canoe.

The puri is baked in a specific bakery that has a “tone”, a traditional clay oven, in which the bread is baked.

The puri comes out tainted with brown edges and black bits from the oven and is both crispy and soft. Very delicious in combination with the salty Georgian cheeses! 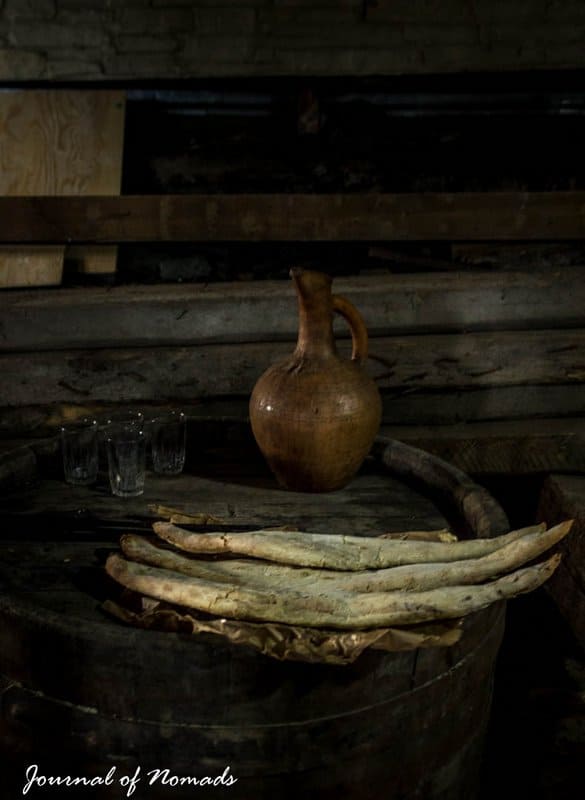 Mchadi is another popular Georgian bread. It’s a cornbread that is traditionally eaten with lobio and cheese. Our Georgian friends in Tbilisi often made it especially for us. 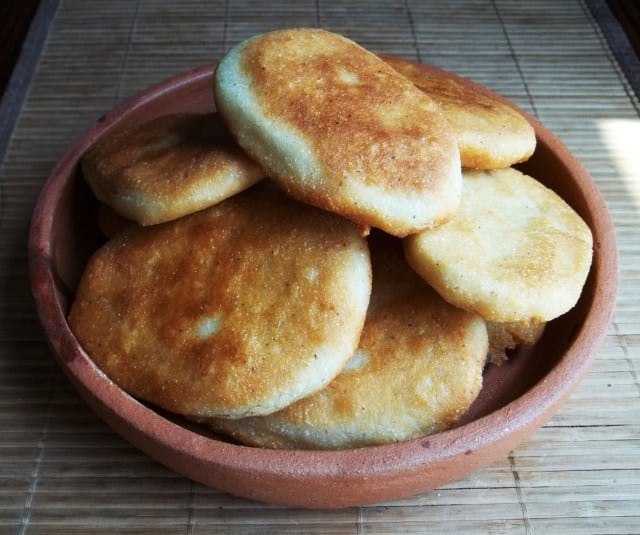 I hope I could enrich your culinary knowledge about Georgian food and hope I’ve triggered your curiosity to try out all these mouth-watering dishes!

Feeling inspired to go on a trip to Georgia? Check our Traveler’s Guide to Georgia!

Have you ever heard of any of the foods I’ve mentioned? Which one appeals to you the most? Or do you know another yummy Georgian food that we definitely have to try? Let us know in the comments! 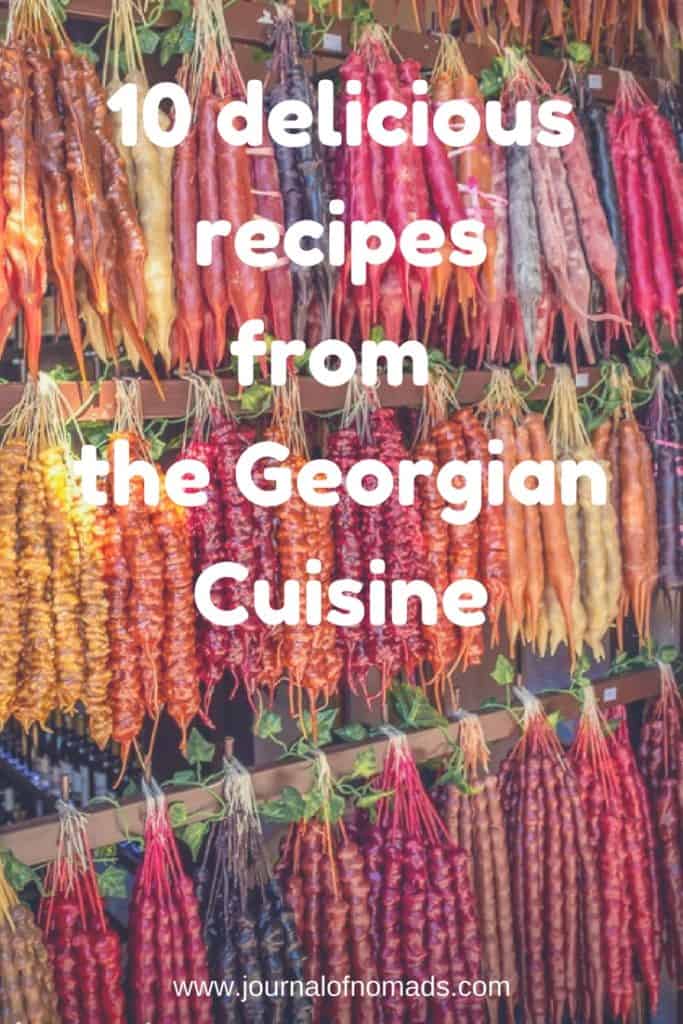 Special thanks to the lovely Andriadze family for inviting us weekly for dinner in Tbilisi, treating us like royalties and teaching us so much about the Georgian culture and food! 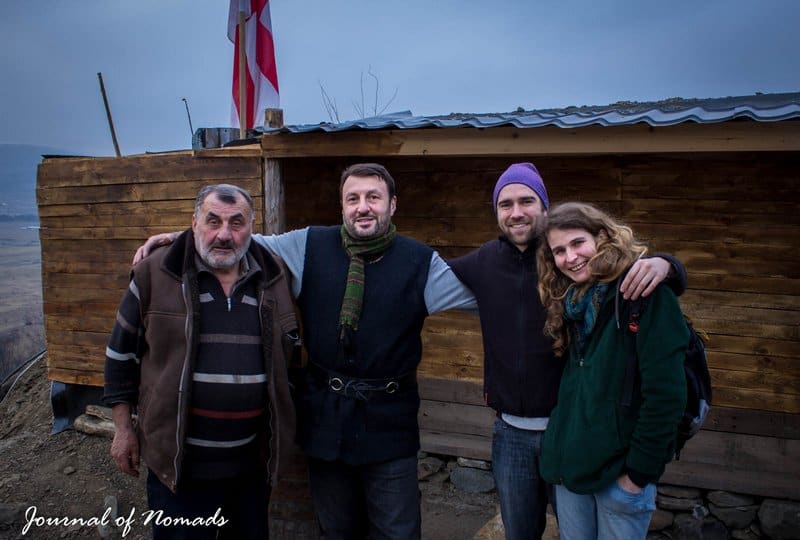 7 thoughts on “Georgian Food – The 10 Best Dishes from the Georgian Cuisine You absolutely have to Try!”