I’ll be honest with you, until one year ago I didn’t really have Turkey in my top 10 bucket-list of countries I wanted to travel to. I saw Turkey as a country where Belgians would often go on all-included beach hotel vacations. Little did I know it has so much more to offer than only stunning beaches near a turquoise blue sea!

Whether you’re a beach bum, a mountain lover, a city person with a heart for chaos or an adventurer who dreams of wild camping and star-covered skies; Turkey is a country that will satisfy your wanderlust!

Do you love unusual places and breathtaking landscapes? Then you’re in the right country!

Right in the heart of Turkey, in the Anatolian region, you can find the unique moon-like landscape of Cappadocia. It’s a visual stunning area where hot air balloons rise with the sun and where you can visit underground cities, cave churches and houses carved in rocks.

It almost sounds too good to be true but when you see this land of vast plains, rolling hills, rugged mountains, extinct volcanoes and fairy chimneys, you’ll get the feeling you’re walking in a scene that comes straight out of a fairy tale! Check also our video about Cappadocia and the Dancing Dervishes!

If you think Cappadocia is unique, then I should definitely mention Pamukkale. You can visit this Cotton Castle in the Denizli province in the southwestern part of Turkey. Pamukkale resembles a world made out of snow and ice and it feels like you’re walking in the back garden of the Snow Queen’s palace!

The bright white color comes from the travertine, a sedimentary rock deposited by the water from the hot springs. According to a legend those springs have magical healing powers.

The pools saved a girl’s life and made her so beautiful that she married a lord. If you want to know more about this special place, then I’m happy to refer you to my article The miraculous pools of Pamukkale.

On top of this little white paradise are the ruins of Hierapolis, an ancient spa resort and city where Cleopatra once walked on her way to bathe in the hot water springs of Pamukkale.

Do you like that photo? Or better yet, do you like history and ruins? Then you’ll have a blast in Turkey! This country has such a rich history.

Many ancient civilizations used to live on what is now Turkish ground. There are still many ruins of what used to be part the Greek, Roman and Byzantine empire that you can visit today.

Southwest Turkey, along and inland from the popular Antalya region, was home to the ancient Lycians, one of the most mysterious ancient civilizations.

There is very little known about them but what has been discovered reveals a fascinating culture and history, different from the rest of the ancient world. We visited some of the Lycian sites and what definitely intrigued us were the magnificent rock tombs in Myra.

The Lycians held a belief that the souls of their dead would be transported from the tombs to the afterworld by a sort of winged siren-like creature. That’s why they placed their tombs along the coast or at the top of the cliffs. 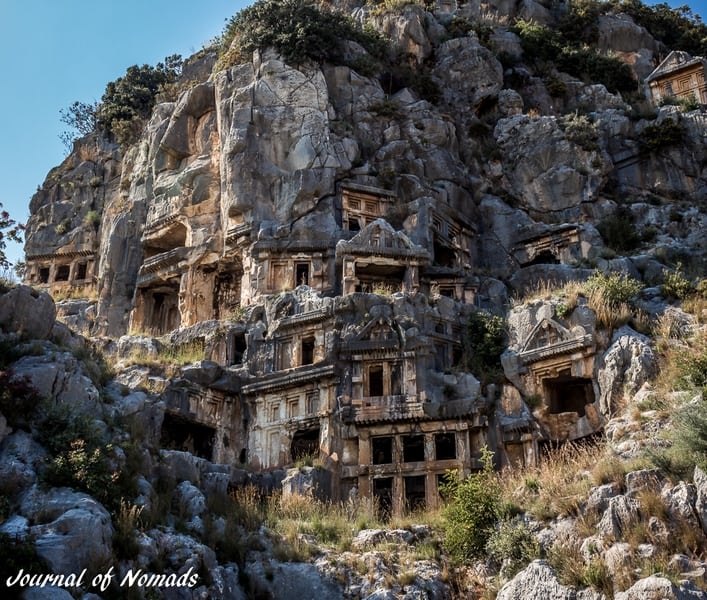 They also had monumental tombs right in the middle of cities so they could keep their dead ones close to the living world, like in Patara. This city used to be a big commercial center and one of the most important seaports at the coast of the Turkish Riviera.

It was also the birth town of Santa Claus. Yes, Santa Claus was born in Turkey! He was better known as St Nicholas, a Christian bishop who helped and provided for the poor and sick people.

After his death the stories of his work and miracles were spread to other parts of the world and people transformed him into the legendary Santa Claus. Today you can still visit his tomb in the St Nicholas church in Demre, only 2 kilometers from those magnificent rock tombs in Myra. Watch our video about Santa’s Tomb for more information!

Another interesting Lycian site is Simena – Kekova, also located in the Antalya province. It’s better known as the Sunken City. Kekova is a little uninhabited island. It used to have a flourishing fisherman town but it got destroyed by a big earthquake during the 2nd century.

Part of the island sunk underwater and the ruins of this ancient town are now visible just below the water surface. Close to this island is a little village called Kaleköy. It’s an authentic fishermen village and only reachable by boat or by foot if you don’t mind the long walk from the nearby village. 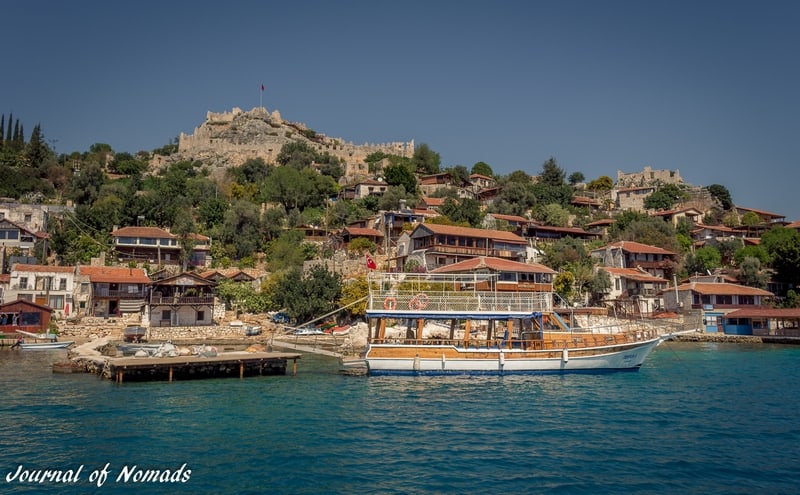 There’s a castle on top of the isolated village which was built in the Middle Ages to fight off pirates.

The people living on the island are mainly fishermen and it’s interesting to have a look into their daily lives. We made a vlog about in We saw a Sunken City.

If you would like to know more about the Lycian history and you love going for hikes in nature, then you should definitely walk the Lycian Way! This path takes you from Fethiye to Antalya along all the ancient Lycian ruins, deserted beached, pine forests and mountain peaks. Check out Hike the Lycian for more information.

One more place I would really advise people to visit in the Antalya region is Olympos (is it obvious that Niko and I loved this area?). Not only are the ruins of this ancient Lycian/ Roman city quite cool to visit, you can also witness the unusual natural phenomenon of the eternal fires on Mount Chimaera.

Methane and other gases emerge from the rock and cause everlasting fires that have been burning for more than 2500 years. But as a die-hard nature lover, I was most taken aback by the stunning environment! 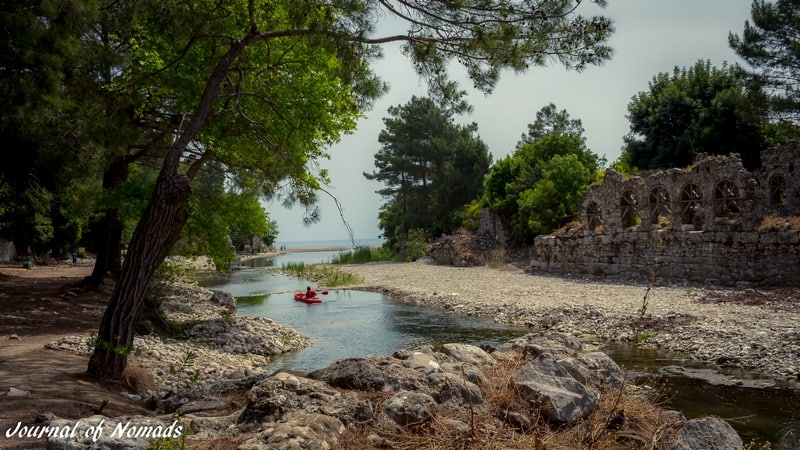 After following the little windy paths along the river, you end up at the beach. It used to be a hippie haven in the 80’s where many hippies loved to swim and sunbathe naked. The villagers weren’t too happy with that and kind of chased the hippies away but you can still feel the relaxed and colorful atmosphere on the beach and in the village.

And guess what? If you would like to spend the night here, you can fulfill your dream of staying in an authentic tree house!

If you want an affordable price with a peaceful night, good music and great service, then definitely check out Olympos Woods Treehouses. We hope that our video Sleeping in a Tree House may inspire you!

Alright, enough about the interesting historical sites and stunning natural places of Turkey. Let’s get to the amazing diversity of the Turkish culture. Each region has its own culture, its own pride and its own recipes.

It’s like countries upon countries within the same borders. Turkey never stops to amaze us! One of our highlights was participating in a Nomadic Walk. This walk was a reenactment of the cultural traditions of the nomads who were living in the Taurus Mountains.

It was a wonderful experience for us modern-day nomads to learn more about the habits and folklore of those ancient nomadic tribes. Read more about it In the footsteps of the Nomadic Tribes.

Joining a local event is a great way of learning more about the culture. Don’t worry though if you don’t come across a special occasion like this. The best places to get a real taste of the local culture are the local markets. Markets can tell so much about a country without using any words. Read more about it in One market many stories ! 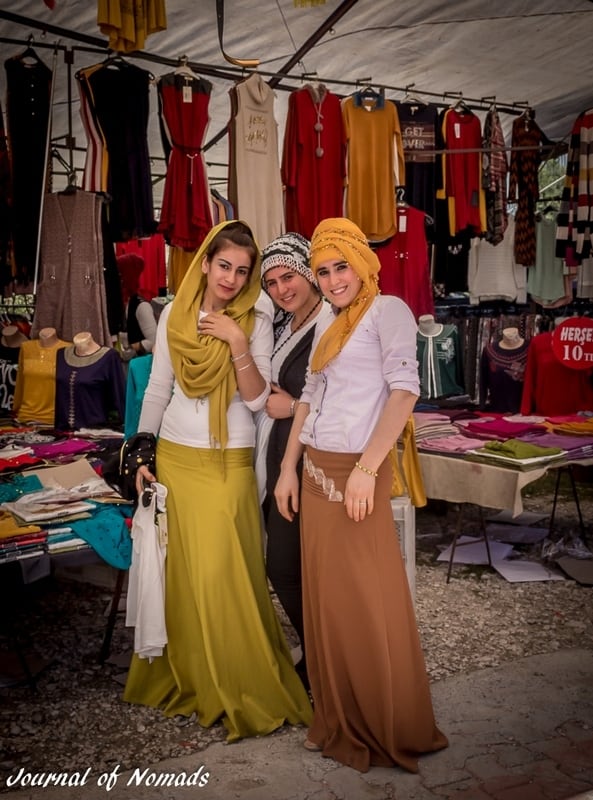 Not only markets are interesting places to learn more about a culture, taking the time to watch how locals prepare some typical dishes and getting to know the secrets to their recipes is also a fun and yummy way of learning more about the people. Nothing connects us more than enjoying a good meal together!

There are many more stunning sites, cultural events, and breathtaking landscapes in Turkey than those I’ve covered here. Turkey has so much to offer and there is still so much to discover! It’s one of the reasons why we are still here.

Even though we’ve already made a few attempts to leave this fascinating country, it must have cast a spell on us. I think it has to do with the ‘misafir perver‘, the Turkish word for hospitality.

So pack your backpack, jump on that airplane or hitchhike a ride, check out this travel guide to Turkey and experience the hospitality, generosity, and delicious tea that the Turks will offer you! 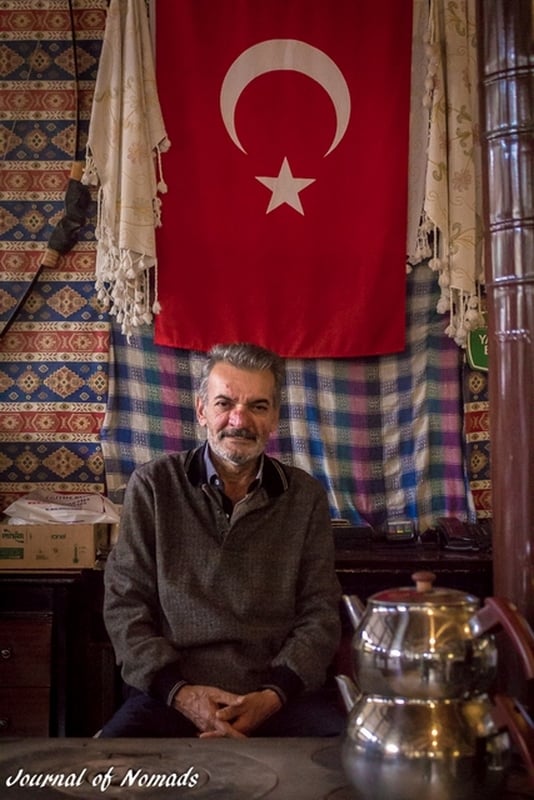 Have you been to this amazing country before? We would love to hear about your experiences and if you have some photos, feel free to share them with us! If you feel inspired to visit Turkey, definitely look up the 9 awesome places worth hitchhiking to in Turkey!