In this photo-essay, we tell you all about Central Asia’s ancient tradition of falconry and where you can visit the Golden Eagle Hunters in Kyrgyzstan. 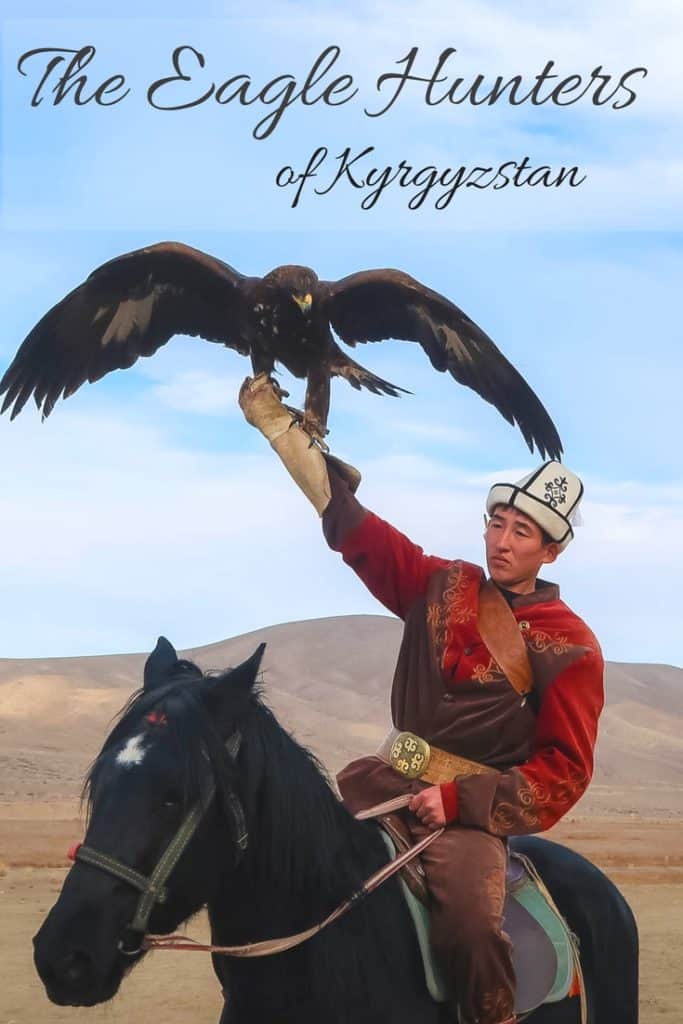 A millennia-old tradition in Central Asia

Central Asia is the birthplace of the ancient tradition of eagle hunting. The nomads who roamed the Central Asian steppes began to tame these birds of prey thousands of years ago and this tradition is still passed on from generation to generation. It was fundamental for the acquisition of food and furs in the harsh winter months.

Nowadays, this form of hunting isn’t essential anymore in the survival of the people and the tradition of eagle hunting is now slowly disappearing. Kyrgyzstan is one of the few countries that still follow some traditions of the nomadic civilization and there are a handful of expert hunters left to this day who are determined to keep this ancient practice alive.

Falconry is often associated with hawks and falcons. The Kyrgyz hunters consider these birds to be for amateurs. Instead, they train golden eagles. They call this eagle the bird of God and prefer to hunt with them as they are the most intelligent, powerful and lethal hunters on the planet and can kill hares, foxes, lynxes and even wolves! 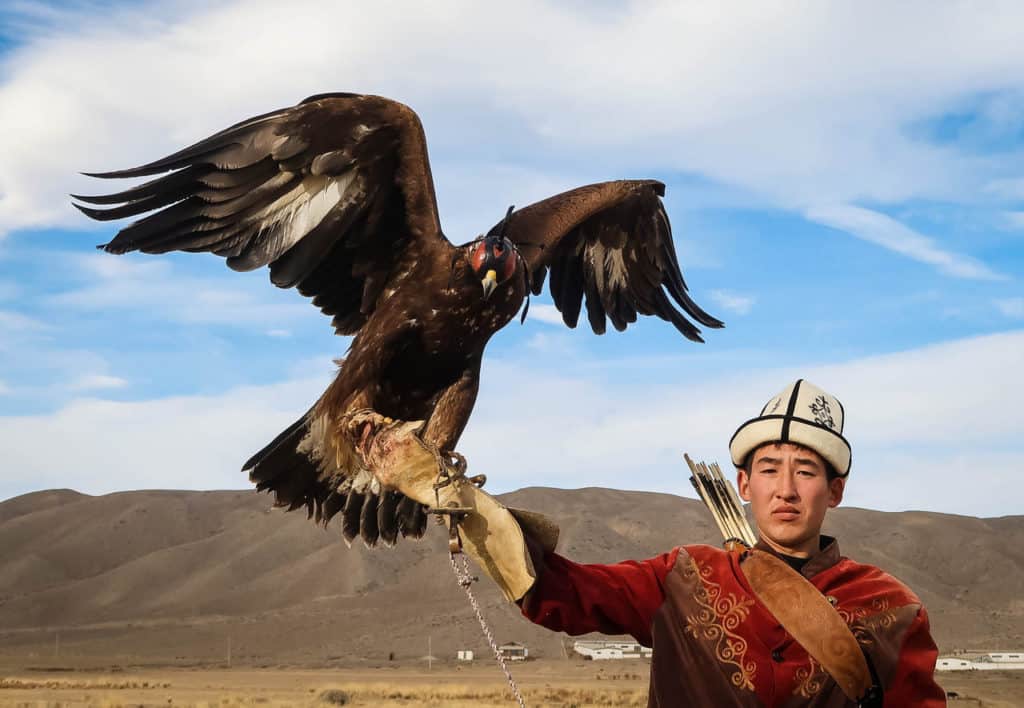 The golden eagle is called berkut in Kyrgyz and is named after the golden feathers at the back of its head. The hunters are called berkutchi and are seen as the guardians of the nomadic hunting traditions.

They’ve always been highly respected in the Kyrgyz society and the hunting was an indispensable part of the nomadic life as it provided enough food and fur for a whole village during the harsh winters. The hunters were wealthy but the whole training, keeping and feeding the birds was a costly affair!

How to train the Eagles

The art of eagle training was passed down from one generation to another, often from father to son. The training itself takes about 3 to 4 years before both eagle and hunter are ready for a successful hunt.

The berkutchi novice first needs to catch an eagle from the wild or take a fledgling from the nest. This is extremely dangerous and some novices are killed by eagles that return to the nest during the theft.

Once the berkutchi has an eaglet, it’s very important that he spends all his time with the bird so that it sees him as his master and starts depending on him. The eagle wears a leather hood during the day so it can’t see. The hunter will often talk and sing to the bird and it learns to listen only to his trainer’s voice. The berkutchi is also the only one who feeds the eagle, which creates a strong bond between them.

To train the eagle to hunt, the berkutchi uses a stuffed fox fur that is fastened to a rope. He also teaches the eagle to come back and fly down on his hand. 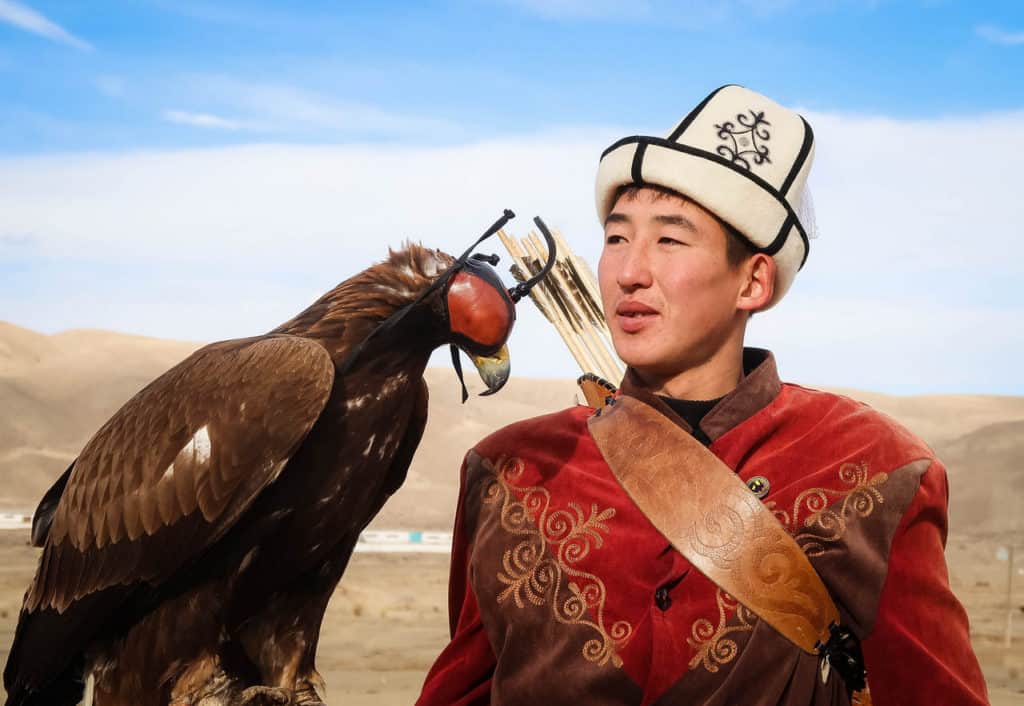 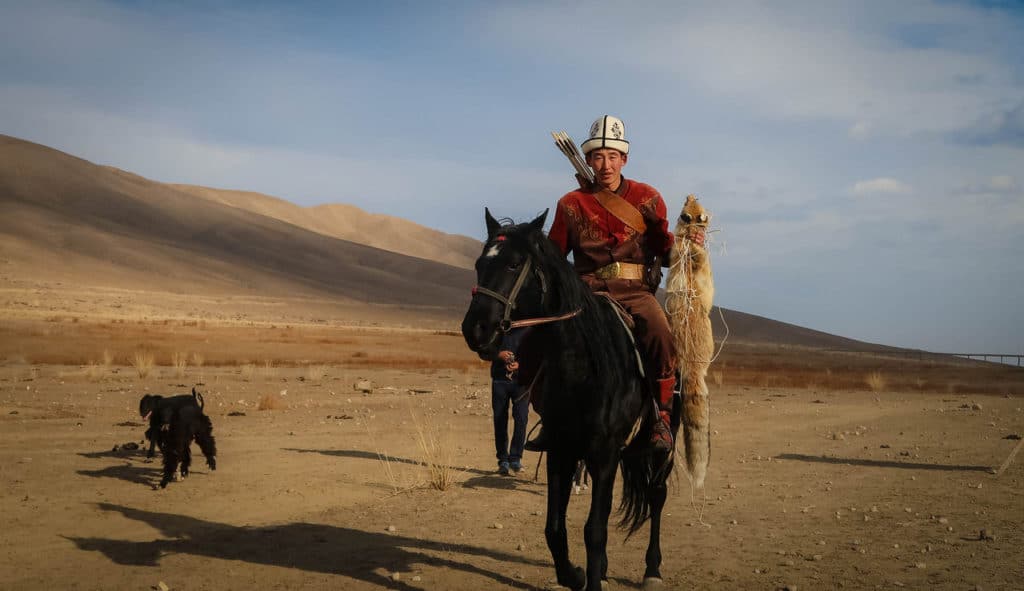 When the training is going well, the berkutchi takes his eagle out to hunt for real animals. He carries the bird on a heavy leather glove and leaves the hood over the bird’s eyes until he spots an animal. When he removes the hood, the eagle quickly sets off and attacks, killing his prey by breaking its neck. Trained to wait for its master, the eagle won’t eat until the berkutchi is at his side. As a reward, he gets to eat a portion of the kill. The berkutchi takes the rest of the meat and the fur back to his village. 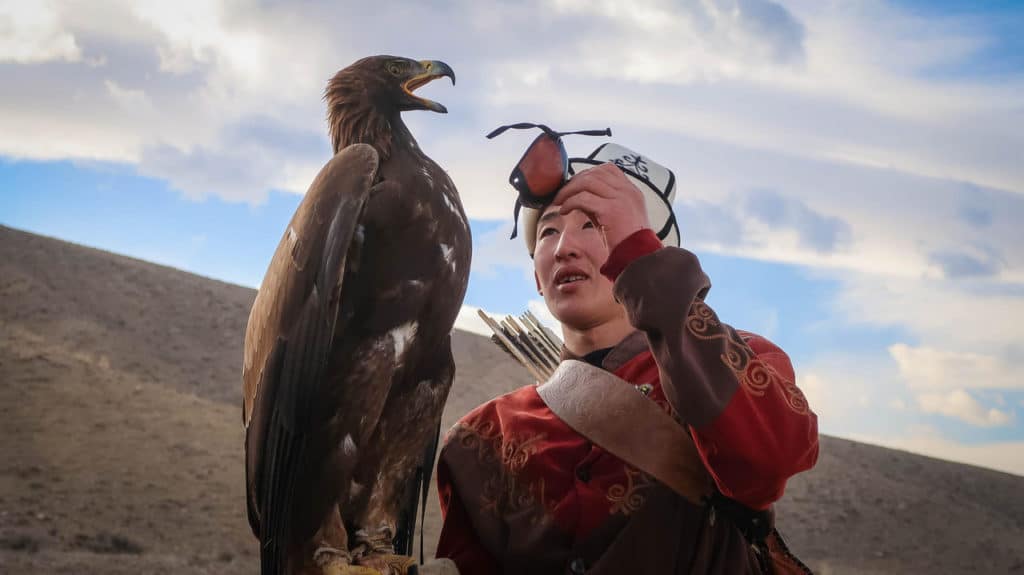 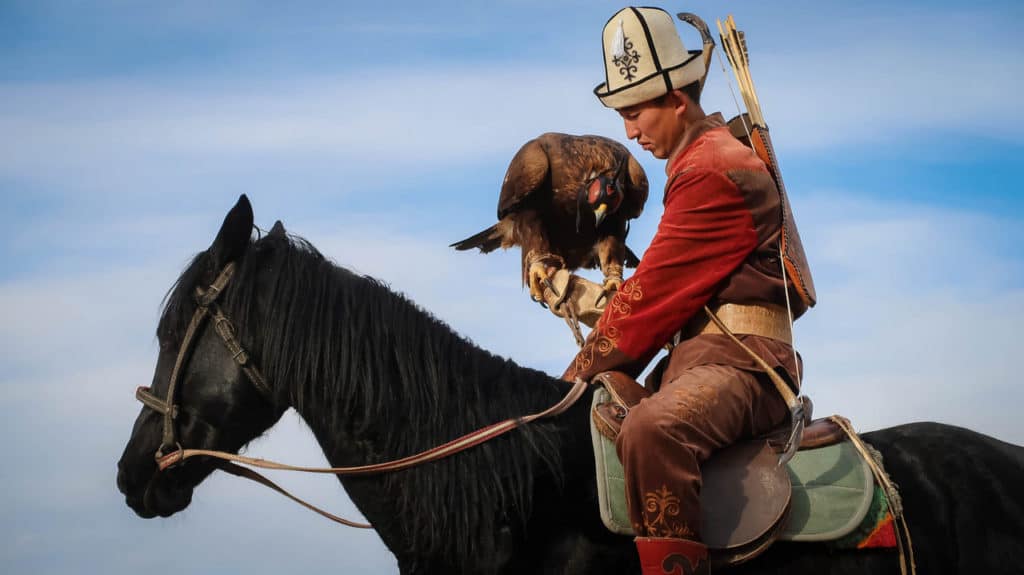 The hunting season starts late October and lasts until the end of February. During the other months, the berkutchi has to spend daily at least 2 to 3 hours with his pet or the bird quickly becomes wild again.

The hunter and the eagle stay almost 20 years together and they build a very strong connection during that time. The eagle isn’t just the hunting partner and the livelihood of the berkutchi, the bird is his family. But after 20 years, he sets the eagle free in the wilderness. 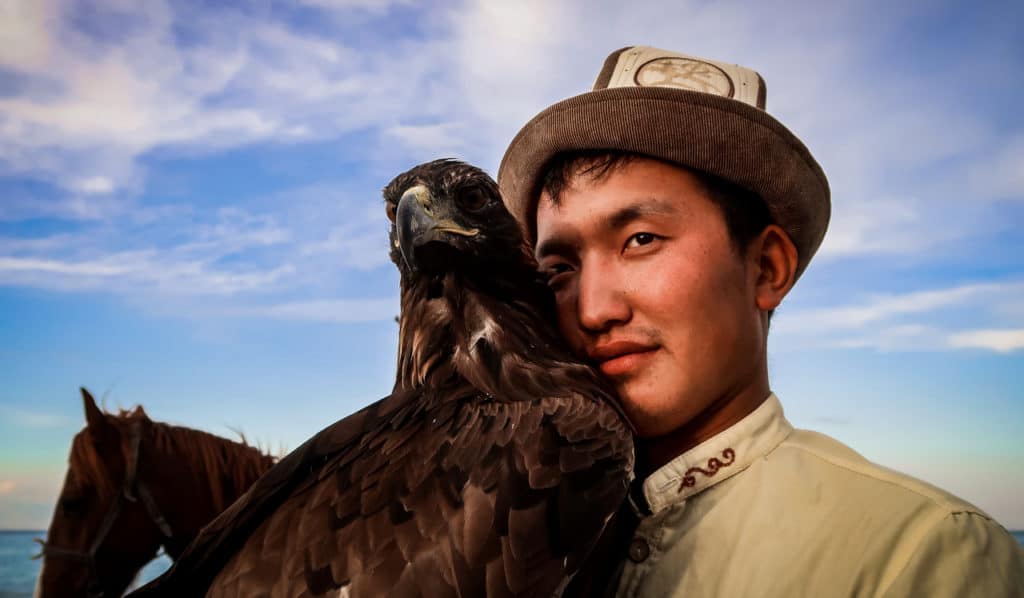 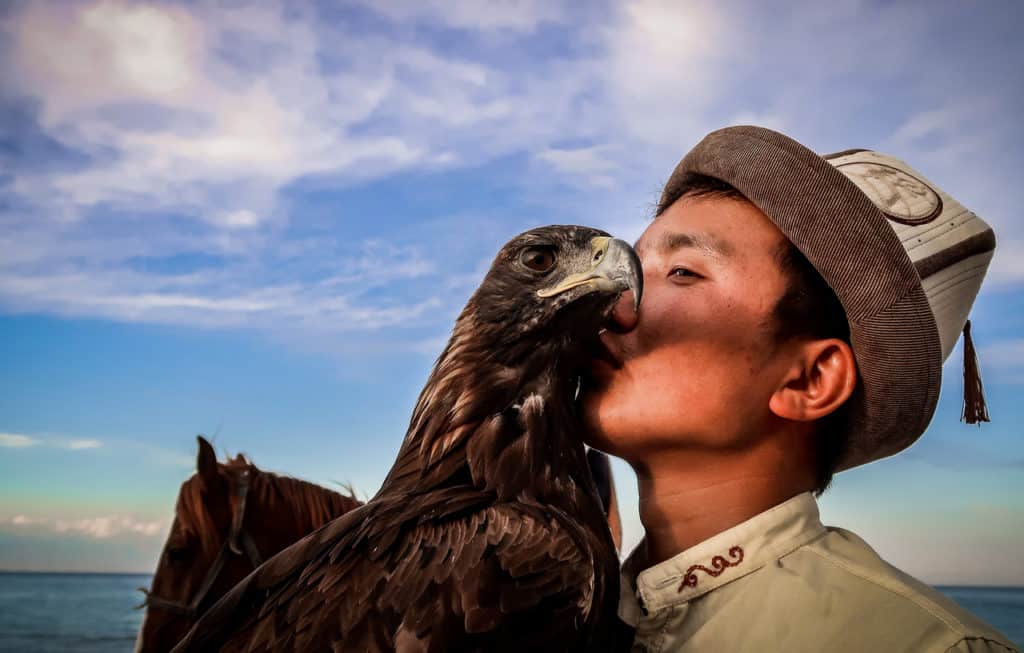 I reckon that this must be quite tough for both and I also wonder if the eagle easily adapts to its freedom. Apparently, it does as this has been done for ages and it helped sustain the population of the free-living birds when eagle-hunting was still a widespread tradition in Central Asia.

Watch this video to see the eagle hunter in action

Where to see Eagle Hunting in Kyrgyzstan

Although this remarkable tradition of the Kyrgyz nomadic culture is slowly dying, there are still a few hunters in the Issyk-Kul region who do their utmost best to keep the tradition going and pass on their skills to young disciples. They are part of the Salburun Federation. 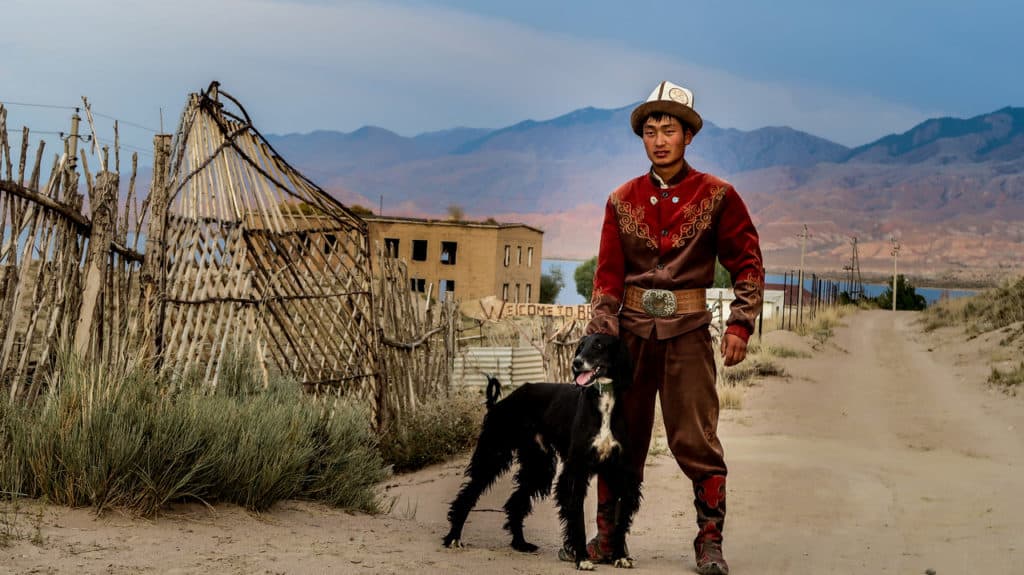 An Eagle Hunter with his hunting dog

This federation often organizes festivals in the fall and winter. Some of the hunters work in partnership with local tour guides, who organize a small tour to Bokonbaevo, a small village near Issyk-Kul lake, where the berkutchi showcase the birds and their hunting skills to the visitors. For more information and to book a tour, check out the website of Destination South Shore.

Our friend Aleksei from Kyrgyz Nomad is also very happy to take you to the Eagle Hunters! He speaks fluent English and you can contact him on his website, on  Facebook or Instagram.  (This is not a sponsored post. We really enjoyed traveling with Aleksei and you will too! (Say hi from us when you contact him!) 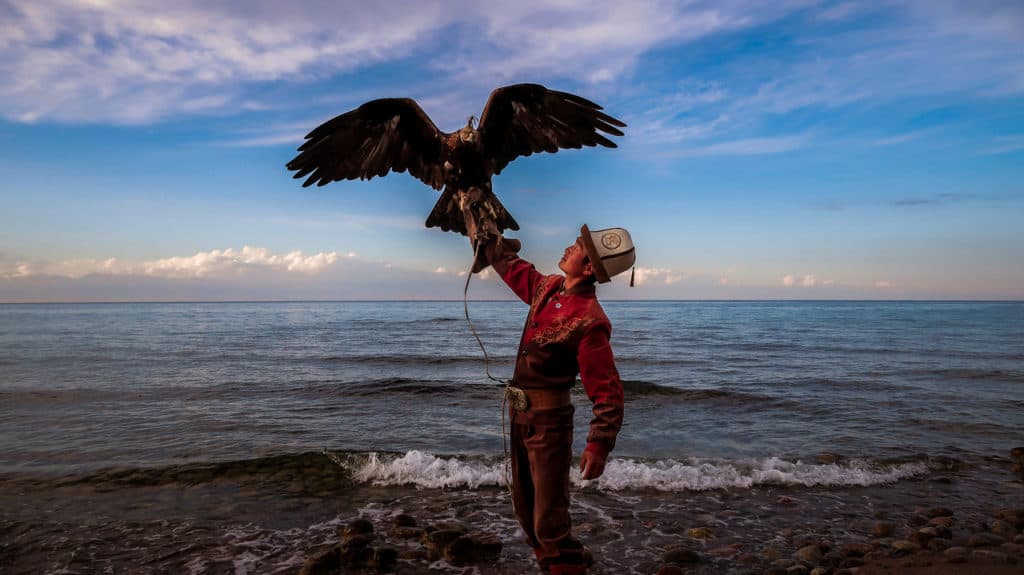 Planning a trip to Kyrgyzstan?

Here are The Top 28 Things to do in Kyrgyzstan!

Books about Kyrgyzstan that you might want to read:

Did you ever have the chance to witness some authentic traditions during your travels? Please tell us more about it in the comments below!

Disclaimer: This post contains affiliate links. If you book your accommodation through one of the links, we get a commission at no extra costs to you! See it as a small donation to keep this blog going so we can create more awesome itineraries. Thank you!