A few weeks ago we were watching a video about Georgia in which we briefly saw an image of a church on top of huge limestone monolith. After doing some research we found out that it was called the Katskhi pillar. It looked very bizarre! The church has been listed as one of the 20 Most Bizarre Looking Churches in the World and even ranked second on the list of 11 Most Incredible Cliff Buildings. We were intrigued and knew it was time for a little hitchhiking trip!

The Katskhi pillar is located in the village of Katskhi near Chiatura in western Georgia. We could see the 40 meter high rock formation already from miles away as soon as we entered the secluded river valley of Katskhura. It looked spectacular! The church on top of this high monolith reminded us of the monasteries on top of the rock pillars in Meteora, Greece and is the source of inspiration of many local legends.

The pillar has always been a place of worship and is referred to as “the Pillar of Life“. It was seen as the representation of a local fertility god during pagan times and it served as a holy place for fertility rites. With the arrival of Christianity in the 4th century, the rock became a place of seclusion for the “Stylites”, a group of early Christian ascetics who had an obsession with narrow pillars. These “pillar monks” loved spending long periods of time sitting or standing on top of a pillar so they could be closer to God. St Simeon Stylites was the most famous pillar monk. He was the first one to sit for thirty years on top of a column from the year 423 onward. The record holder of “pillar sitting” is St Alypius. He stayed on the same pillar for 67 years without a break, out of which the last fourteen he was lying down because his feet could no longer support him… Now this is called devotion! It’s not hard to figure out why the Stylites loved the Katskhi pillar so much and why the region become known as the “Valley of the Monks”.

Between the 6th and the 9th centuries the Stylites built two churches on top of the Katskhi pillar but the big question here is how on earth did they manage to carry all the building materials up the steep column that towers 40 meters high in the air?! How did they actually get up there in the first place? No one knows. They must have been excellent rock climbers if you ask me! Researchers even found three hermits cells, a crypt with the remains of one unknown Stylite and a wine cellar (Georgians would always take a good bottle of wine with them, especially if they knew they’d be stuck on a high pillar for a while!).

The occupation by the Islamic Ottoman Empire brought an end to the practice in the 15th century and the pillar remained uninhabited for centuries. The only written record of this ancient monastery was in the text of an18th-century Georgian scholar, who described it as following: “There is a rock within the ravine standing like a pillar, considerably high. There is a small church on the top of the rock, but nobody is able to ascend it; nor know they how to do that.” 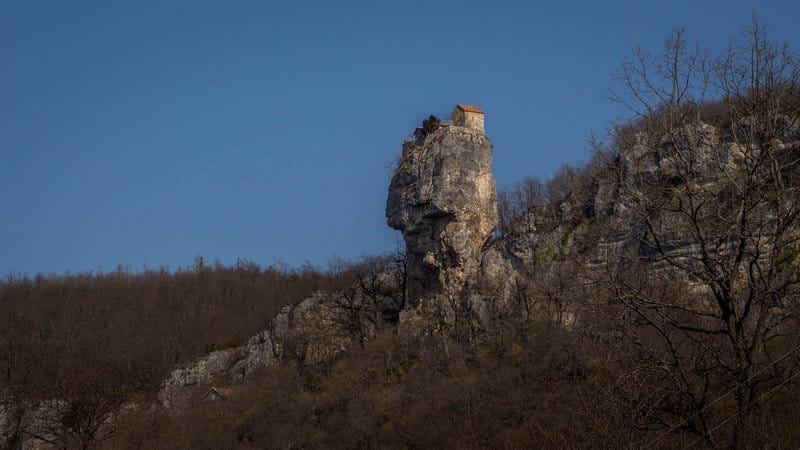 The small monasteries were ruined and forgotten until 1945 when researchers climbed the monolith for the first time. In the 1990’s an Orthodox monk named Father Maxim Qavtaradze rebuilt one of the small churches with the help from the local villagers and money from donors throughout the country. He built a 40 meter long iron ladder to enter and leave the column, which he called “the stairway to heaven”. The ladder was for a while only open to male visitors but is no longer open to the public as Father Maxim now lives in a small cottage on top of the pillar as the first Stylite in 600 years.

“The Stairway to Heaven”. It takes about 20 minutes to climb it!

We would have loved to meet Father Maxim but unfortunately this was not possible. His only visitors are monks who live in small cottages at the base of the pillar and provide him with food and necessities twice a week and a group of troubled young men who are seeking consolation and comfort in the newly built church of Saint Simeon Stylites. Only one photographer was able to pay a visit to Father Maxim, under the condition that he first took part in seven hours of daily prayers during four days. Read more about it in this interesting article in the DailyMail.

Father Maxim climbs down only twice a week to get his life supplies. Source:
Daily Mail

We were only allowed to walk around the foot of the pillar and visit the little church. There was a very sacred energy present and although visitors were welcome, we felt like we were intruding. The monks smiled but none of them spoke to us. We were the only ‘outsiders’ there. It was so silent and peaceful that we barely dared to speak to each other. We didn’t stay long but the Katskhi pillar and its surroundings have left a big impression on us!

The colorful murals inside the chapel

I couldn’t see myself living years in seclusion on top of a steep cliff but I have the uttermost respect for the monk who does. He must have an amazing “room with a view”! The church of Katskhi Pillar is definitely the most incredible church I’ve ever seen!

Have you ever been to a very bizarre, incredible and/ or unique church before? Tell us more about it!