Located in northwestern Georgia and locked in the heart of the Caucasus mountains lies the historic province of Svaneti. The only way to get there is by hitchhiking or driving from Zugdidi to Mestia, along a steep windy road looking over beautiful gorges, wild rivers and majestic mountains. 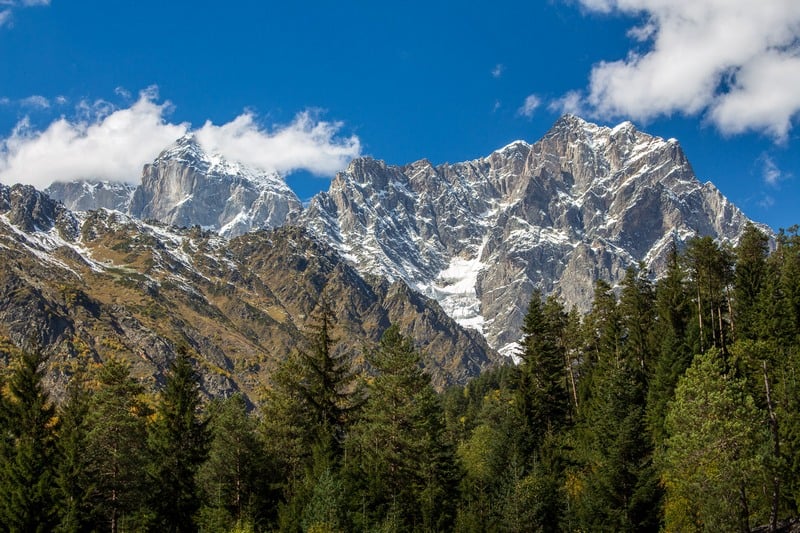 Svaneti consists of several small villages, build on the snow-covered mountain slopes and surrounded by a breathtaking scenery of alpine meadows. Walking around in the picturesque villages, that are dominated by tower-houses, gives you the feeling that you are thrown back in time into the European Middle Ages.

It’s only since the mid-2000’s that Svaneti is accessible to tourists. After the fall of the Soviet Union in 1991, some villages were completely abandoned and the area was feared as an outlaw territory where bandits and criminal gangs took refuge. But even before that, the inhabitants – who are called the Svans and are now a subgroup of Georgians – were known as fierce highland warriors and gatekeepers of the mountain passes. No ruler was able to tame this remote area. The Svans were tough survivors who were able to withstand long harsh winter, defend themselves against the invasions of other Caucasian tribes and who practiced murderous blood-feuds. They’re not really the kind people you want to have a fight with!

Because of their geographical isolation the Svans have their own unwritten language called Svan and most of their cultural traditions are still preserved. Nowadays they might only show their fierce nature if you would refuse their hospitality with the typical Georgian tradition of offering you a glass of home-made wine or chacha (a very strong spirit drink) and a large meal of the provincial cuisine (bread, cheese, stewed beef and more cheese).

Every household in Svaneti is a fortress. The villages were too scattered to be encircled with a protective wall so each individual house built a stone tower – called koshki – that offered protection to the family and their livestock during attacks and blood-feuds and it also served as a shelter for the most valuable possessions of every family.

Nowadays most families are moving into a more comfortable home and some towers are open for tourists to visit. One of the locals that we spoke with, joked that the towers are now only used to spy on the neighbors.

Don’t drunk-walk on those ladders!

From seclusion to tourist magnet

For a long time the villages stayed preserved from today’s fast changing world. The people were self-sufficient and lived in harmony with nature. The only sign of the modern world are the electricity wires hanging loosely between the houses. Some of the villages, like Ushguli – which is by the way one of the highest and most remote villages of Europe (2200m above sea level)- are completely closed off from the rest of the world during the long and harsh winters. It would be very interesting to experience how people live there during those cold months. The Svans probably spend the entire summer preparing for the winter.

The medieval and remote times of Svaneti are now slowly coming to an end. Svaneti has seen more changes in the past few years than in a whole millennium. Although the elders are still living a traditional existence – which is visible in Ushguli where inhabitants mainly gallop on horseback through the streets – more and more young people are migrating to the big cities of Georgia in search of jobs.

Vans and cars full of foreign backpackers are now taking over the region. The rough and bumpy roads that links the villages of Svaneti will soon be paved, even all the way to Ushguli. New constructions that serve as guest houses and hyper-modern government buildings are popping up like weeds, especially in Mestia. There is now even an airport terminal that offers daily flights from and to Tbilisi, the capital city of Georgia. Svaneti is becoming a popular attraction for hikes and trekking. It’s quite ironic that the stone towers which were used to keep outsiders at a distance are now attracting tourists from all over the world. We already noticed that, even outside the summer season, the streets of Mestia were more inhabited by tourists than locals.

These changes are unsettling. What will happen to the villages and land of the Svans? Will they be able to preserve their authentic traditions or will they become a touristic show of the voyeuristic modern world? Some Svans are optimistic, hoping it will give them more jobs and opportunities so the young people won’t flee the poverty by moving to the cities.

We can only hope that Svaneti will keep its fierce authenticity and that the tourism won’t be able to tame its wild heart !

Do you want to see more of this intriguing area? Watch the video here and experience the beauty of Svaneti.

Have you ever visited an authentic place that is now turning into a tourist attraction?  Do you think it has positive consequences for the locals or do you think it will destroy their authenticity? What are your thoughts about this?

27 thoughts on “Svaneti – will the Wild Heart of the Caucasus finally be tamed?”