Yes, you’re reading it correctly. Niko and I have decided to stop our overland journey around the world. This might come as a surprise if you’ve been following us since the beginning of the adventure. Three years ago we were so excited and motivated to take on the challenge of traveling the world without taking one single airplane and even though we’re not continuing anymore, it has been an incredible and unforgettable journey to hitchhike slowly from Europe to Central Asia.

The route we hitchhiked from Ireland to Kyrgyzstan (it took us 3 years!)

So why are we not continuing this overland adventure?

It all started last winter when we were living in Bishkek, the capital city of Kyrgyzstan. We had decided to rent a small apartment so we had a warm and comfy place from which we could teach English online and save some money for our upcoming travels.

The idea seemed perfect at first because we really wanted to explore Kyrgyzstan more once the winter would be over. And since we weren’t taking any airplanes and couldn’t fly off to a warmer destination, we had to find a solution to get through the cold winter in Central Asia.

It was quite a unique experience to spend the winter in Central Asia. We went skiing in Kazakhstan, which was very special for me since it was the first time in more than 20 years that I was back on the ski slopes. Niko went on an awesome horseback riding trip to Son Kul with his brothers who came to visit him all the way from Canada and we did some beautiful hikes in a true winter wonderland. 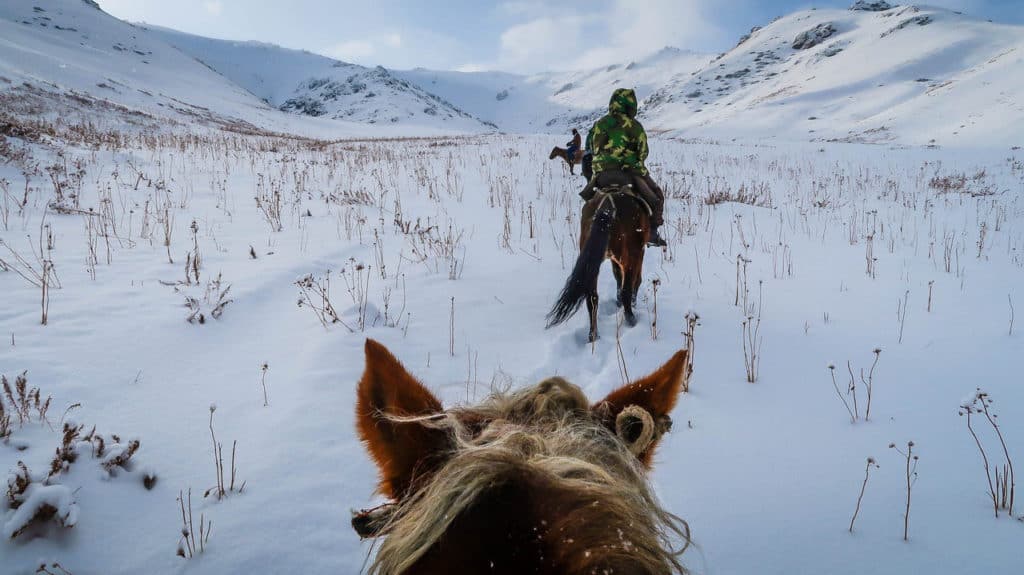 But apart from those occasional little trips, we spent most of our days inside the apartment in Bishkek. It’s just not ideal to travel, hitchhike and camp in temperatures of -30ºC. It was fun and cozy at first. We enjoyed the small luxuries of having our own kitchen, bathroom, bedroom, and a warm living room but after a while, I started feeling like I was trapped.

People who know me well, know that I’m not a city person. I don’t mind being in a city for a few weeks but after a while, I crave being in nature. I’m an outdoor person and I feel at home in the mountains, in the forests, and at the sea. But it’s just not so inviting to camp and be constantly outside when the temperatures are way below zero. So most of the time I was inside the apartment, sitting behind my laptop to work (or to procrastinate by watching movies and videos).

I’m not going to go into much detail here but let’s wrap it up by saying that I started feeling depressed and I was often physically very ill. I didn’t take good care of myself and instead of doing things that made me feel good, by going outside for a good walk for example, I wrapped myself in the dark blanket of the winter blues, so to speak.

I might look happy here but in reality, I wasn’t doing too great

Niko noticed that I wasn’t doing too well. That’s when we first started talking about maybe quitting this ‘project’ of traveling the world overland and flying to a warmer place for the winter where I could spend a lot of time outdoors without freezing my ass off. Niko suggested that we could then fly back to Kyrgyzstan in spring.

I considered the idea and started already checking out some destinations. But then my resistance kicked in. It felt like I was giving up and not finishing a goal I had set for myself. I didn’t want to abandon our whole mission just because I was going through a hard time. The winter would be over in a few months anyway so I told Niko I wanted to stick to our original plan and that I’d get better soon.

In the following weeks, however, the topic of taking airplanes returned a lot into our conversations. Somehow a seed was planted. Even though we really had loved the challenge of hitchhiking from Europe to Central Asia, we started to feel limited in our coming options.

We couldn’t get a visa for China as we couldn’t apply for one in Central Asia. That meant that we would have to hitchhike through Mongolia in a timespan of only one month, travel through Russia on a transit visa of maximum 10 days to take the ferry from Vladivostok to South Korea or Japan. Not only would this mean that we’d have to rush through these countries (and as you know, we love to take it slow), it would also become a costly affair.

Read: How to travel Overland from Europe to Asia

We realized that the challenge of not taking airplanes became more of a task and that the prospect of traveling towards South East Asia wasn’t inspiring us anymore. We felt much more motivated by the idea of flying and exploring Pakistan, hiking in the Himalaya’s in Nepal and discovering off-the-beaten-path places in North Africa (just to name a few) than traveling to popular destinations like Bali, Cambodia or Thailand.

Niko and I loved the intrepid experiences in Central Asia and it became clear we wanted to continue having more outdoor experiences like this. So, after a lot of talking (over a few bottles of wine) we made our decision: we wouldn’t continue our overland journey around the world.

It was honestly a very liberating feeling knowing we can travel spontaneously again instead of moving through a planned overland itinerary of countries. It suddenly felt like the world was at our feet and we had so many options to choose from. One thing was clear however, I wanted to spend the coming winter in a ‘warmer’ destination.

So after another couple of bottles of wine (those drinks are sooo good to make decisions…), Niko suggested traveling to Morocco. He lived there for nearly a year before we met each other and the country felt in a certain way like home to him. As he traveled there for such a long time, he knows the country and the language pretty well. He already mentioned more than a few times that he wanted to return to Morocco and explore the off-the-beaten-places with me.

While I’m writing this post, Niko is already in Morocco. I went back to Belgium for a few weeks to reconnect with my roots, my friends and family (it had been many years since I spent some quality-time here) and I’m joining him in just a few days.

This feels like a new chapter in our journey around the world. We’re definitely not quitting our travels, not even after living full-time on the road for more than 7 years. We’re just altering our travels to what suits us the best at this moment in time. Why limit ourselves when we have the freedom to make our own choices and nothing is standing in our way?

We’ll stay in Morocco for a while and we’ll see where the road will take us. One thing is for sure though: once the winter is over, we’re returning to Central Asia. We had so much fun with our group adventure tours last summer, that we are organizing more Adventure Treks and Overland Expeditions in Kyrgyzstan in the coming summer.

Join us in the summer of 2019 in Kyrgyzstan on one of our Adventure Tours!

Even though it wasn’t an easy decision for me (and us) to take in fear of ‘giving up’, I came to the realization that it’s so important to do what feels good instead of trying to achieve something that doesn’t really matter in the end. I want to be happy in what I do, feel inspired by my choices and feel fully alive and kicking.

Just like we grew and changed, this blog is also transforming itself. From now on we’ll also be writing about our outdoor and unique adventures in the uncommon destinations we’re going to visit. I hope you’ll still join us for this exciting new journey!

26 thoughts on “Life-update: Why we’re not continuing our Overland Journey around the World”