When Niko and I were planning our journey to Kazakhstan, there was one destination that stood out and that I really wanted to visit: Turkestan!

Once known as Shavgar and Yassy, Turkestan was one of the most important commercial centers of the Silk Road, the trade route between Europe and China. It was also the capital of the Kazakh khanate (an area ruled by a Khan) where the ceremonies of enthronement took place.

The city was founded over 15 centuries ago and is now the historical center of Kazakhstan’s culture. Since traveling the Silk Road had always been a childhood dream and we had to miss out on Iran due to visa issues, I was definitely not planning on skipping Turkestan!

Another reason why I really wanted to visit this ancient city, was the mausoleum of Khoza Ahmed Yasawi. He was the first man who brought Islam to Central Asia and his mausoleum attracts every year thousands of pilgrims.

Looking at pictures of the beautiful mosaics of Kazakhstan’s greatest architectural monument, made me wanted to grab a sketching book and draw some colorful intricate patterns.

I know that the architecture in Uzbekistan will inspire me even more but according to what I’ve been reading, it’s comparable with the magnificent buildings that I will see during my upcoming journey to this Central Asian country. 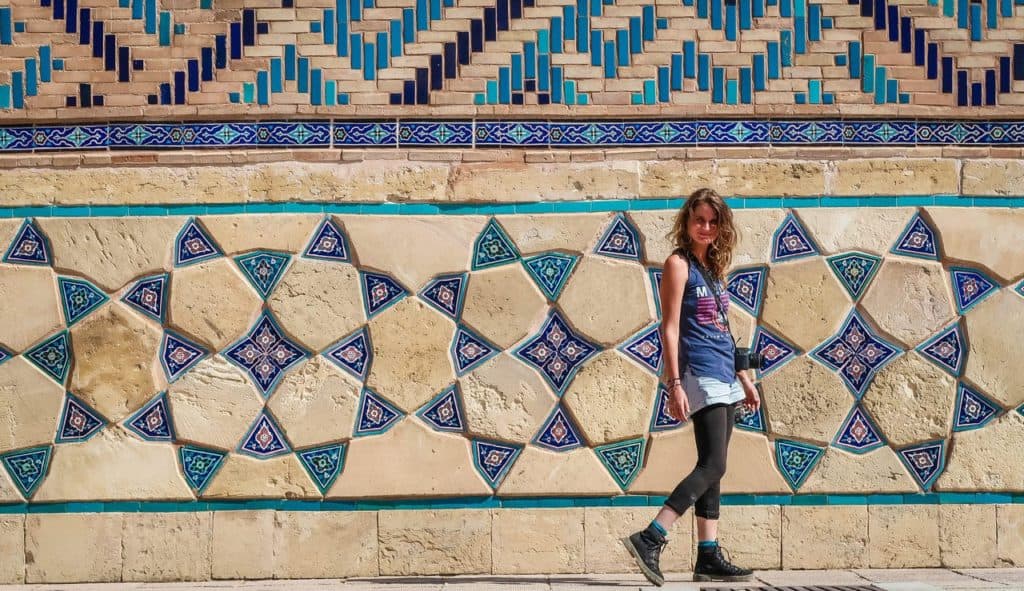 Turkestan is located in the South of Kazakhstan. After almost one week of straight driving through the endless and featureless steppes of Western Kazakhstan, it was a welcome change to arrive in the southern part of the country.

The dry planes started changing into green hilly fields and we even saw some water holes where camels and horses would gather to drink.

It had been ages since we’ve seen a river that wasn’t dried up or looked like a pathetic little stream! I often wondered how the nomads and herders, who live in those tiny villages in the middle of the steppes, survive with such a shortage of water and greenery! I’m tempted to go back there one day to experience life in a desert village!

We drove through the tree-lined streets, looking for the entrance to the pilgrimage site.

Turkestan is nowadays a large industrial, educational and cultural city. It didn’t look so different from the other cities we had seen so far on our road trip, except that it had a lot more trees and character and there were a lot more local and foreign tourists wandering its streets.

The ancient site of Turkestan lies on the edge of the city. Once we arrived there, it was hard not to notice the dazzling turquoise dome of the mausoleum. 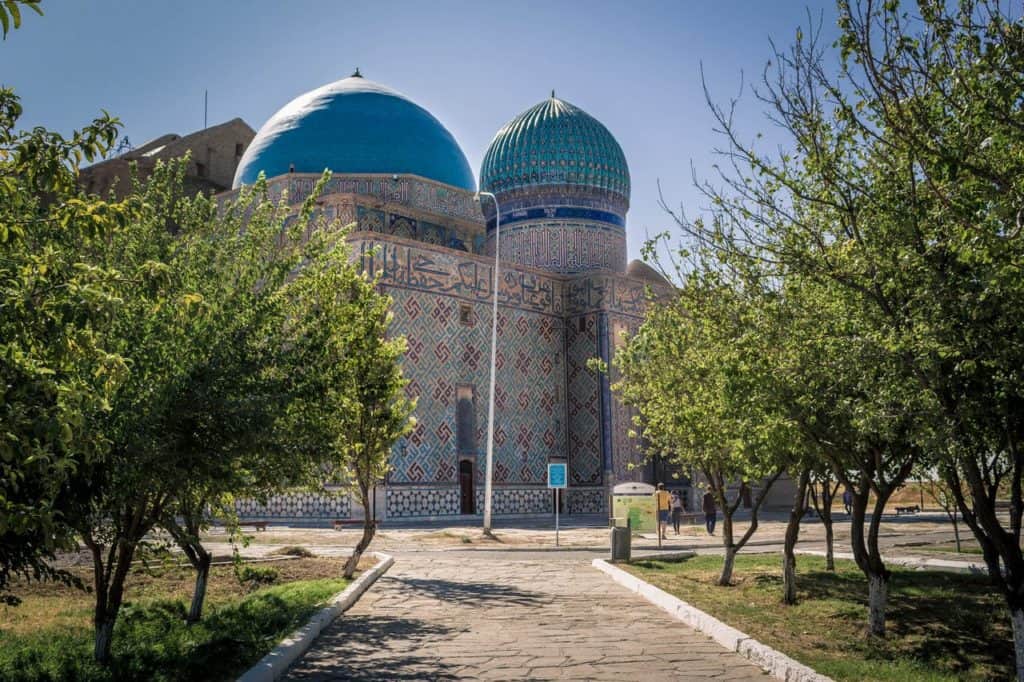 This mausoleum is described as a masterpiece of medieval architecture. It was built between 1397 and 1405 on the orders of Amir Timur, who ruled over Central Asia. That’s why this mausoleum resembles his other creations in Uzbekistan, also known as “Timurid architecture”.

Yasawi played a very important role in the Islamic world as he was a religious teacher who converted many Turkic people with his teachings and poems to the Islamic religion. He was considered to be a saint and Muslim pilgrims came from far and wide to see his mausoleum. 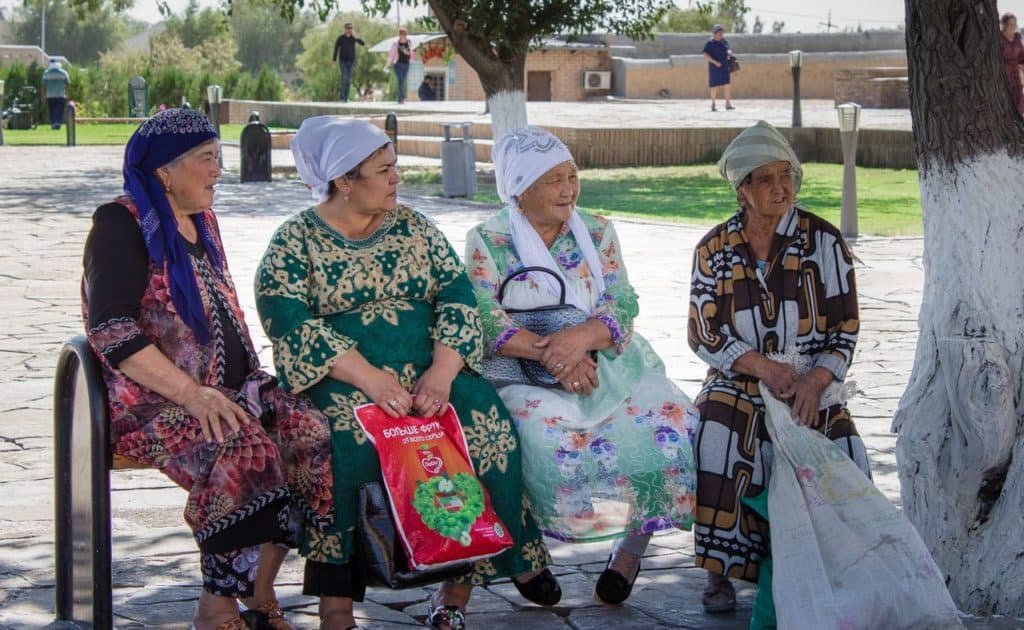 Want to learn more about Kazakhstan? Read our Travel Guide to Kazakhstan!

When Timur started the new construction of this mausoleum, it quickly became the new standard for Islamic architecture and it attracted even more devout followers. However, the construction was stopped in 1405 with the death of Timur but Turkestan remained an important religious center of spirituality. 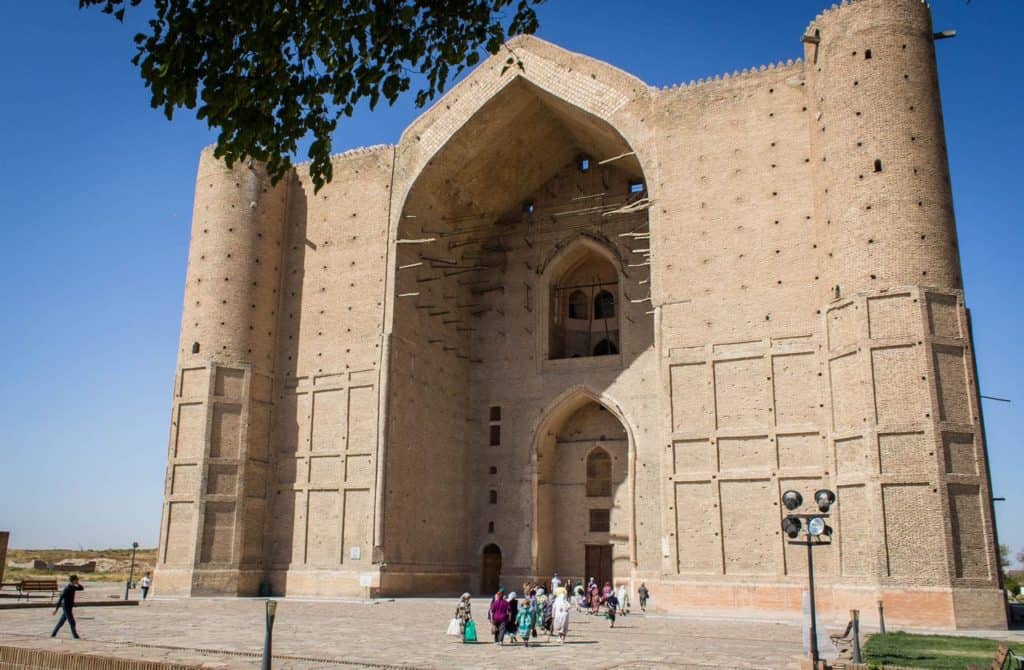 Although the mausoleum is unfinished, it is still an amazing piece of architectural artwork! There are a total of 34 different rooms and chambers inside with a massive bronze cauldron in the center of the hall, used for religious purposes.

The dome on the top of the mausoleum is the largest of its kind in Central Asia. I was especially fascinated by the astoundingly beautiful mosaic patterns on the outside of the building. The mausoleum was recognized as a UNESCO World Heritage Site in 2003.

The mausoleum isn’t the only building you can visit on the ancient site of Turkestan.

Locals and tourists also come to visit the beautiful gardens, the underground mosque ( Kumshik-Ata) with the cell in which Kozha Ahmed Yassawi is said to have spent the last years of his life and is now used as a house for underground meditation.

There is the Historical Cultural Ethnographic Center with exhibits on the regional history, the Friday mosque which dates from the 19th century and an old bathhouse with a well nearby that has religious importance to the people.

You can also visit many tombs of the Kazakh khans and the representatives of nobility, including the tomb of Rabigha Sultan Begum, Timur’s granddaughter, which you can find in the small mausoleum in front of Yassawi’s mausoleum.

Fragments of the original citadel wall separate the ancient city from the modern city of Turkestan.

Visiting Turkestan was definitely a highlight of our travels in Kazakhstan. I’m happy to have seen the splendid and colorful architectural artwork of the mausoleum, especially after spending 7 days in a row in the endless steppes of Western Kazakhstan.

Turkestan is definitely a place worth visiting if you plan on traveling to Kazakhstan! It’s one of the must-go-to places if you want to learn more about Central Asia’s rich heritage!

You can walk around the historical sites for free but you have to pay an entrance fee if you want to go inside Yassawi’s mausoleum. Locals pay 200 KZT, foreigners 500 KZT (equals $1.5). The entrance fee to the Historical Cultural Etnographic Center is also 500 KZT.

How to get to Turkestan with public transportation

Taking the train to Turkestan is probably your best option.

There are direct trains from Almaty (20 hours) and Shymkent (3,5 hours) and you can also take the train from the capital city Astana. Turkestan has also an international connection to Tashkent, capital city of Uzbekistan, but for this you’ll need an Uzbekistan visa! For more information about train schedules and tickets, go to tickets.kz

Watch the video we made about our visit to Turkestan (second part of the video):