The Chronicle of Georgia, also called History Memorial of Georgia, is surprisingly enough not a very known place in Tbilisi. There is a lot of information available on the many things you can do in Tbilisi but not so much about this remarkable memorial.

It took us a long time to figure out what it was exactly and how we could get there but it was worth the struggle! This monument is impressive, not only because of its sheer size and the surrounding views but also because of the decorative scenes on the huge pillars. The place has a very special vibe and it’s definitely worth a visit! 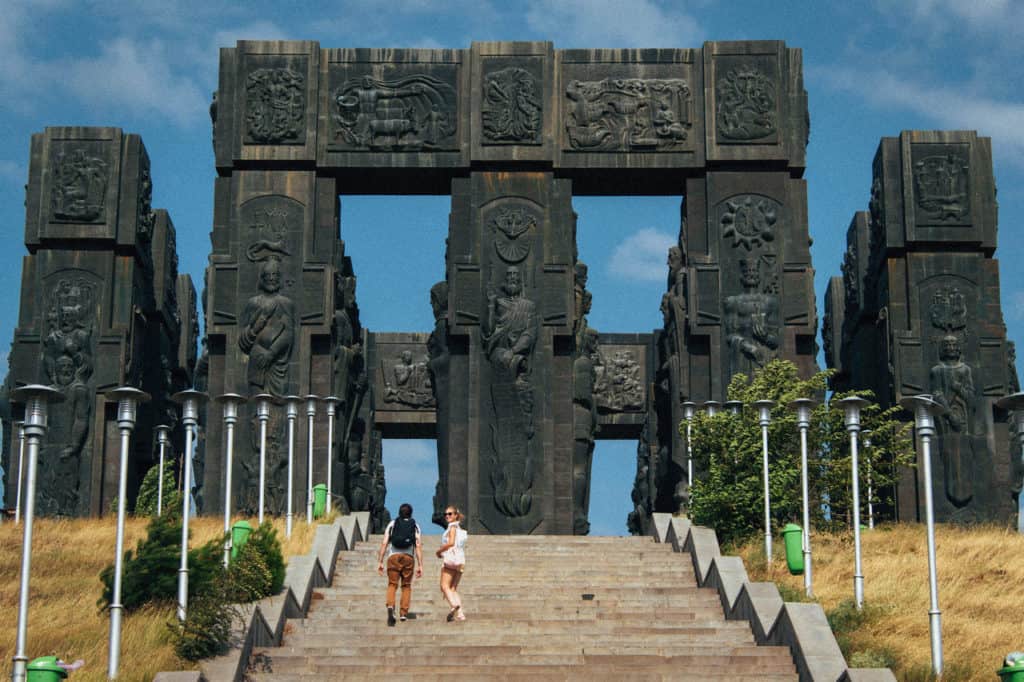 When we were living in Dighomi, a district just outside the city center of Tbilisi, we noticed in the distance a bunch of odd giant blocks on top of a hill. For months we were wondering what they were but every time we asked the locals, they had no idea. Even our landlord had not a clue what it was. We tried to investigate it but neither guidebooks nor Google could tell us what those gigantic blocks in Tbilisi were. The search engine showed us other odd monuments in Tbilisi but not the one we were looking for. 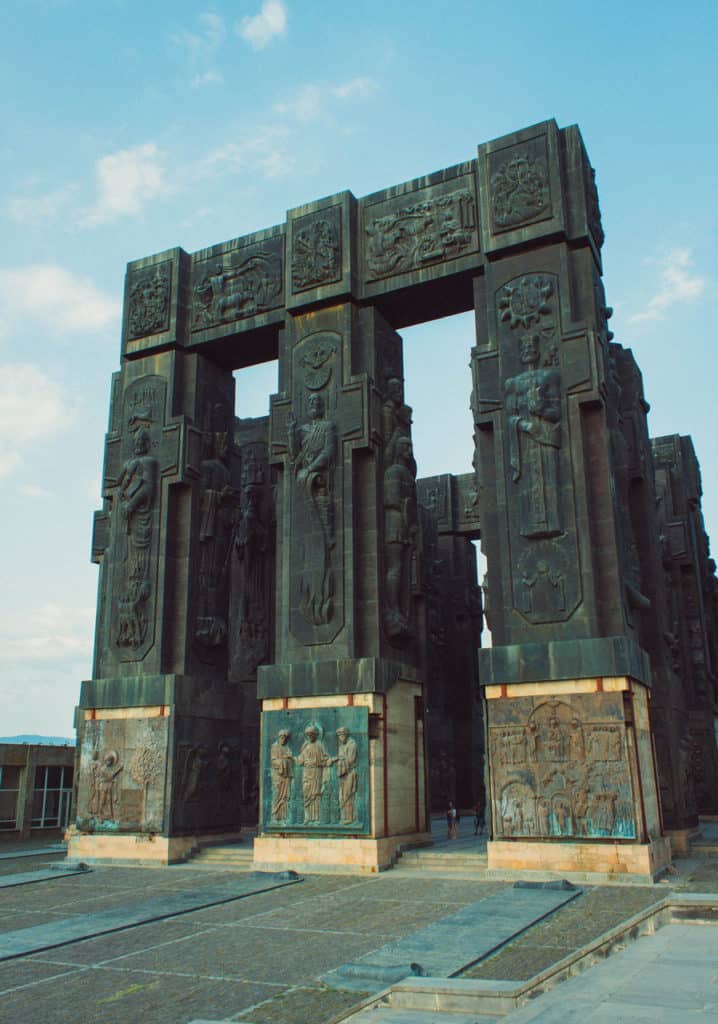 When we moved away from Tbilisi, we had all forgotten about this odd monument (well, we assumed it was some kind of a monument). Until last weekend. We returned to the city to buy travel gear for our upcoming journey. On the highway to the Tbilisi Shopping Mall our attention was drawn again to this dark sculpture in the distance and we knew we couldn’t leave Georgia without finally finding out what it was. This time we had more success while searching on Google.

The monument was called “The Chronicle of Georgia” and by looking at the photos, it seemed to be very impressive! It reminded me of Stonehenge in England. When we found out that it was only 12 km from the Tbilisi Mall, we didn’t have to think twice and decided to visit Tbilisi’s version of Stonehenge.

Getting there was also a bit more challenging than expected. It didn’t seem like there were any mini-buses going there and the taxi drivers at the mall had no clue what we were talking about. Even with the help of our friend Katia, who tried to explain to them in Russian where we wanted to go, they had no idea what we meant.

I showed the drivers some of the photos but the only reaction I got from my audience was a scratch on the head and a shrug of the shoulders. The Chronicles of Georgia didn’t seem to be a very popular spot…After about 10 minutes we finally found a driver who knew where we wanted to go. We bargained a price for the ride (12 GEL) and we were on our way. Finally, after 11 months, we were going to see those ‘gigantic rocks on a hill in Tbilisi’.

These gigantic rocks turned out to be huge! I really wonder why so little people know about this monument while it is so big! It turned out that the sculptures are near the Tbilisi Sea, a popular reservoir where locals love to go for a swim during the hot summer days. It seems it would be hard not to notice this monument when you’re taking a dip in the water!

We were all super excited and in awe when we arrived. We first had to climb a big staircase that led us to the platform on which the stone blocks are standing. It’s only when we arrived at the top – completely out of breath – that we realized how huge this monument was! 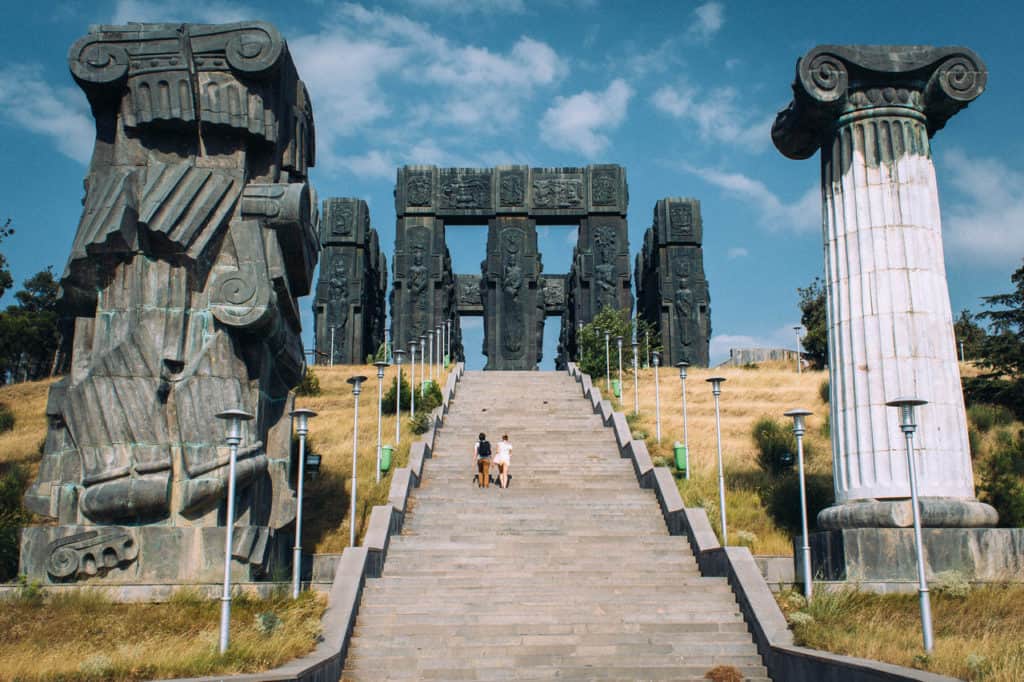 The Chronicle of Georgia consists of gigantic pillars. The top parts are decorated with scenes of the history of Georgia, mainly with the kings and queens who reigned over the country. The lowers parts portray the life of Jesus. The monument was created by Zurab Tsereteli, a Georgian sculptor. The construction started in 1985 but it’s still partially incomplete. It must take ages (and huge ladders) to create a monument of this size!

In front of the monument is a cross that represents the Cross of St Nino, the woman who brought Christianity to Georgia. Behind the rock pillars is a small chapel and when you walk around them, you’ll have an amazing panoramic view over Tbilisi Sea and the communist-looking suburbs of the city.

Now that we have a drone Niko couldn’t resist flying it over and around the mighty pillars. But it didn’t turn out so well as he was hoping for! Niko wanted to fly the drone from the center of the monument. It could have been amazing footage but he got surprised by the sudden gusts of wind that nearly crashed the drone into one of the pillars. He tried to fly the drone a second time in front of the monument and while the take-off looked promising, the wind disagreed with his attempt.

Another strong rush took our little drone and Niko lost control over it. I never saw him running so fast, trying to keep up with the drone and regaining control over it. I honestly thought for a moment that we had lost it but Niko turned out to be a skilled pilot and was able to land the drone safely in the nearby forest. So be warned when you try to fly a drone there!!

After wondering about it for nearly one year we were very glad that we had finally visited these ‘huge blocks on top of the hill’ before leaving the country. The Chronicle of Georgia is definitely a hidden gem in Tbilisi that you shouldn’t miss out on. 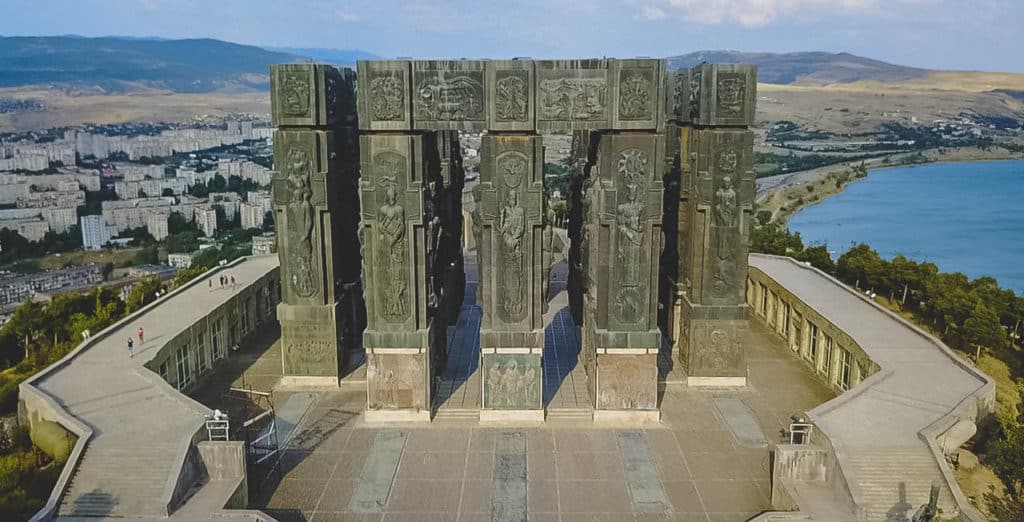 How to get to the Chronicle of Georgia:

You can take a taxi from Didube Metro Station to the memorial. You’ll have to bargain for the price but don’t pay more than 12 GEL (we paid 10 GEL from the memorial to Didube Station). As I mentioned before, not many taxi drivers will know what you mean when you say that you want to go to “the Chronicle of Georgia”.

Even if you have a Russian speaking friend like us who can translate it, the majority of the drivers still won’t know what you mean. Your best bet is to say that you want to go to ‘Sakartvelos matiene’ or address it as ‘the memorial at Tbilisi Sea’, point it on the map or show photos. If that still doesn’t help, just say that you want to go to Tbilisi Sea and you can show the driver the memorial once you arrive there (it’s hard not to notice it).

ABOUT JOURNAL OF NOMADS

Journal of Nomads is an Adventure Travel Blog for independent backpackers and adventurous travelers interested in culture, nature, and outdoor activities in off-the-beaten-path countries.

JOIN ONE OF MY ADVENTURE TOURS!