An informative photo report about Nowruz, how this Persian New Year is celebrated by the Kyrgyz people and where to find the best Nowruz festival in Kyrgyzstan.

The first day of spring, also called the Spring Equinox, has long been celebrated as a time of rebirth and new beginnings.

The days are getting longer, flowers are starting to bloom, blossoms are lacing the trees and the animal world begins to surface from its winter sleep.

This change of season is also affecting us as humans. We’re slowly on starting to have more energy once we see and feel the warmth of the sun.

Many people will also do a thorough cleaning of their homes and treat themselves to new clothes for the upcoming summer.

In many cultures the idea of ‘spring cleaning’ isn’t just a seasonal excuse to clean out the cupboards and get a new wardrobe; it’s the celebration of Nowruz, a traditional festival that dates back thousands of years.

What is Nowruz and who celebrates it – a brief history

It marks the first day of the first month in the Iranian calendar and it starts at the exact moment of the vernal equinox, which is the beginning of spring in the Northern Hemisphere.

That’s why it’s also called the Festival of Spring. Nowruz is usually celebrated between the 19th and 21st of March, depending on when the equinox happens.

No one really knows how far back Nowruz dates but it’s estimated that it’s earliest celebrations started 3500 years ago.

The festival’s origins lie in Zoroastrianism, an ancient Persian religion that is older than both Christianity and Islam.

It was one of the holiest days in the ancient Zoroastrian calendar as the return of the spring was of great spiritual significance.

When merchants started traveling along the Silk Roads (a network of trade routes between China and Eurasian countries) they didn’t only trade goods but also exchanged knowledge, ideas, cultures, and beliefs. That’s how Nowruz was introduced into Eurasian, West Asian and Central Asian countries.

This ancient rite developed and expanded, incorporating new social, religious and cultural influences as it spread along these ancient trades routes. In 2009 UNESCO added this holiday to its list of Intangible Cultural Heritage of Humanity.

Nowruz is nowadays celebrated by people of many different religions, cultures, and countries that were located on the Silk Roads,  Kyrgyzstan being one of them.

The way that people celebrate Nowruz varies from country to country but there are also common practices.

The beginning of spring is a time for celebrating the cultural heritage with traditional songs, music, dancing, sports, food, and rituals. It’s also a time for family and friends to gather and celebrate and to promote peace and solidarity within towns and communities. 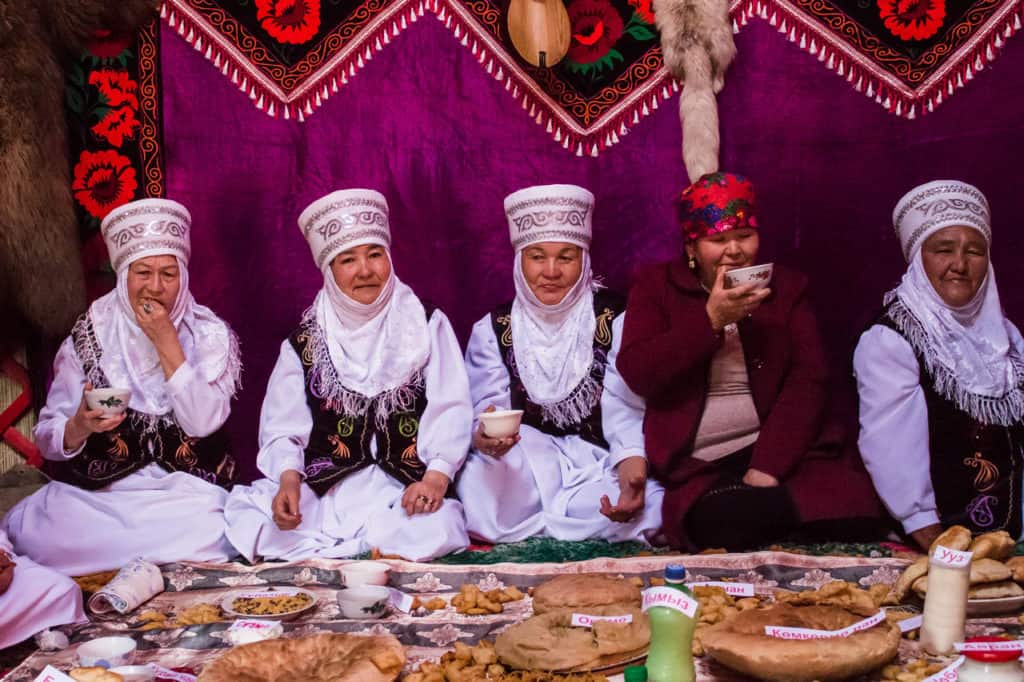 How is Nowruz celebrated in Kyrgyzstan

The 21st of March is in Kyrgyzstan the International Day of Nooruz (the Kyrgyz name for the Persian New Year).

During the regime of the Soviet Union, celebrating Nowruz was seen as a religious display and therefore not allowed, like many other cultural and religious traditions.

When Kyrgyzstan regained its independence in 1991, the country re-engaged with its culture and nomadic roots. Therefore, on Nooruz Day, the Kyrgyz people welcome the arrival of spring by celebrating their national culture.

All around the country, there are open-air festivals and folkloric events during which they showcase their ancient nomadic traditions and sports, such as wrestling, horse games, archery, etc.

Niko and I really wanted to attend one of these festivals so we decided to travel to the Southern shore of Issyk-Kul Lake to visit the South Shore National Games Festival in the small village of Kyzyl-Tuu.

We arrived there on the day before the festival so we were also able to see how the people of the surrounding villages were preparing for the Nowruz celebrations.

The yurt village in the South Shore National Games Festival

How do the people prepare for Nowruz

People already start with the preparations weeks before the spring festival.

The women go into a serious spring-cleaning mode, washing their homes inside out and getting rid of any unnecessary clutter so they can start the new year fresh. Even the streets were looking (almost) sparkling clean! 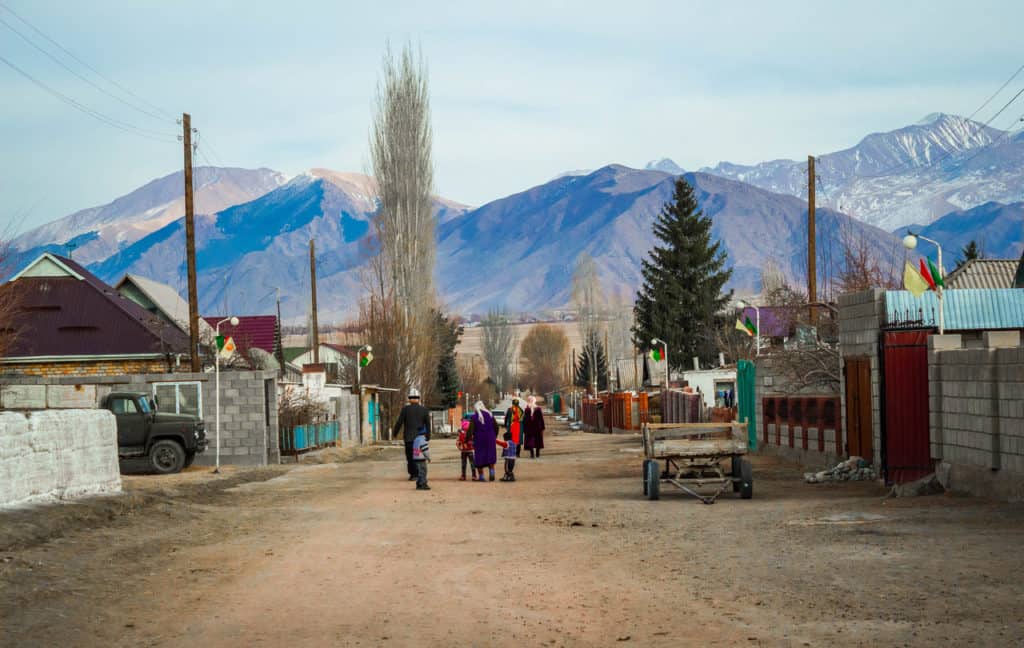 Nowruz is one of the most important holidays and celebrations of the year so people also dedicate a lot of time making decorations for this special day.

They are very creative using plastic bottles and old tires to make the most beautiful ornaments and sometimes they even do a little competition among themselves to see who can make the best decorations. 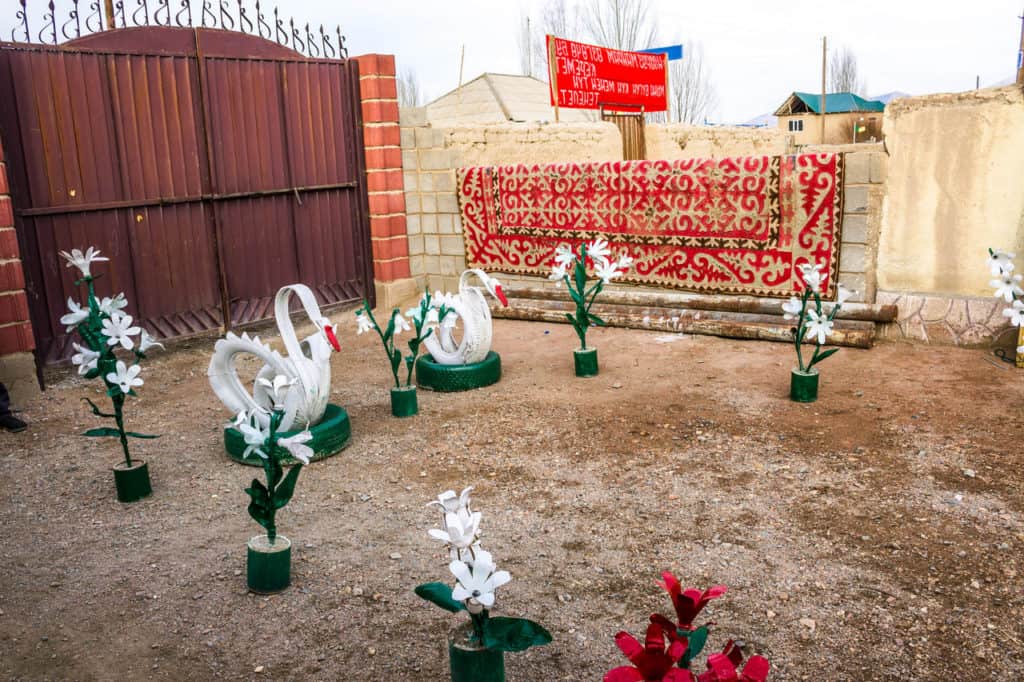 The biggest part of the preparations is in making the food. Nowruz is a day of feasting so huge amounts of traditional Kyrgyz dishes are being prepared for the new year.

Sumalak is a sweet pudding cooked exclusively for the spring festival. You won’t only find it in Kyrgyzstan but also in all the other countries who celebrate Nowruz.

The recipe varies from region to region but the main ingredient and the cooking ritual are the same. 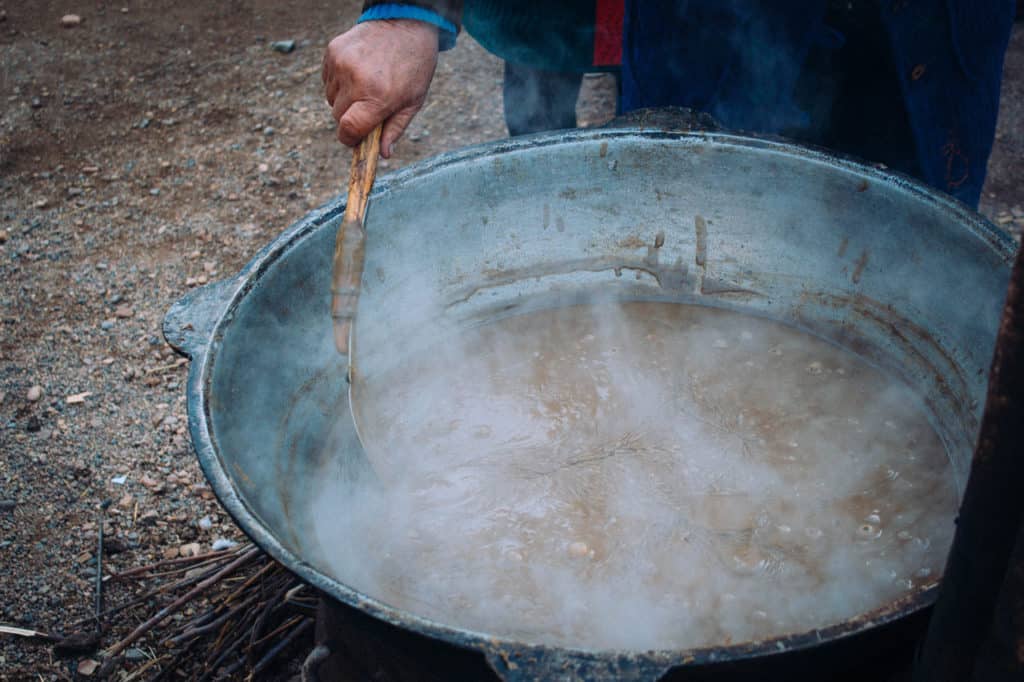 The main ingredient in sumalak is sprouted wheat grains, which give the pudding its unique sweet taste.

Women soak the wheat in water for a week until it sprouts, then crush it into a paste and mix it with water.

The mixture is then tossed into a cauldron with water, oil, flour, sugar and seven stones (I’ll tell you more about this unusual ingredient in a second) and it needs to be stirred for several hours. 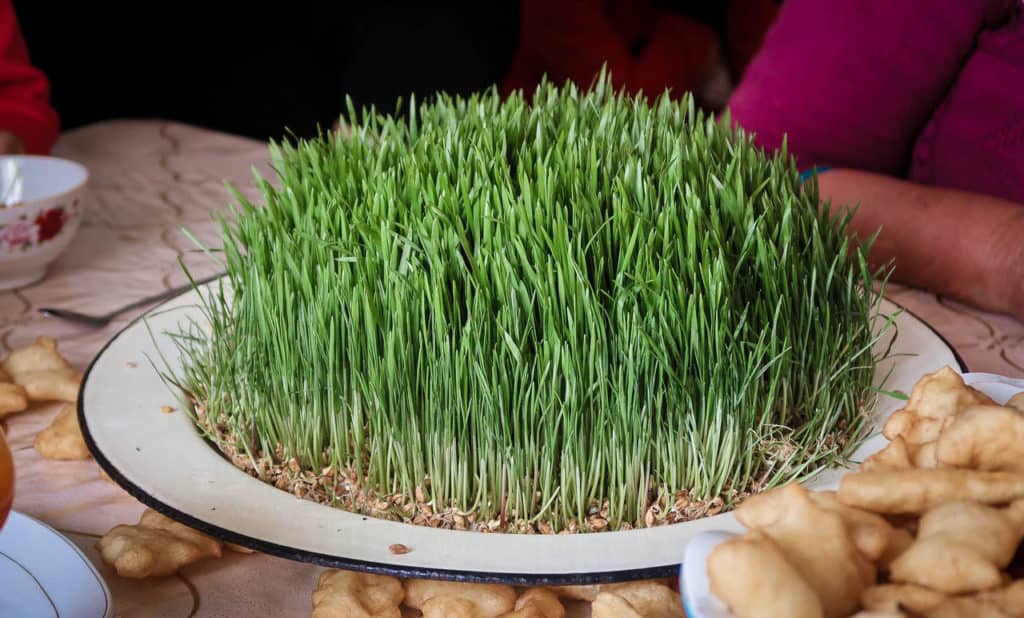 The main ingredient of sumalak

Cooking sumalak is not just about preparing a tasty pudding but it’s also a symbol of friendship, community, and good luck.

Neighbors get together and take turns stirring this mixture while listening to music, singing songs and telling their children the legend of this dish and why the stones are an important ingredient in making the sumalak.

There was once a poor woman who had seven children. She wasn’t able to feed her children as the harvest had been very poor and she didn’t have enough food to last for a whole winter.

In an attempt to save her family from starving, she took the largest cauldron she had, poured water into it and added a handful wheat grains and several stones.

She made her children believe she was making them a tasty meal and stirred the water all day and night. She fell asleep for several minutes but when she woke up and looked into the cauldron, she found it filled to the edges with a brown nutritious substance.

The woman started feeding her children and then distributed the sumalak among her neighbors, who were also starving.

Soon they all started doing what she did and each and every person found their cauldrons filled with the tasty pudding.

The people kept giving the sumalak to others in need, helping each other to survive through the winter.

Sharing the sumalak with friends and family is still a very important custom. Celebrating Nowruz symbolizes solidarity, unity, the happiness of living and receiving the return of spring and therefore new life and possibilities after a harsh winter in the countryside.

Here are some other traditional Kyrgyz dishes served on Nowruz:

Sheep lungs marinated in a mix of milk, spices, salt, and oil. This dish is specially cooked for honored guests. 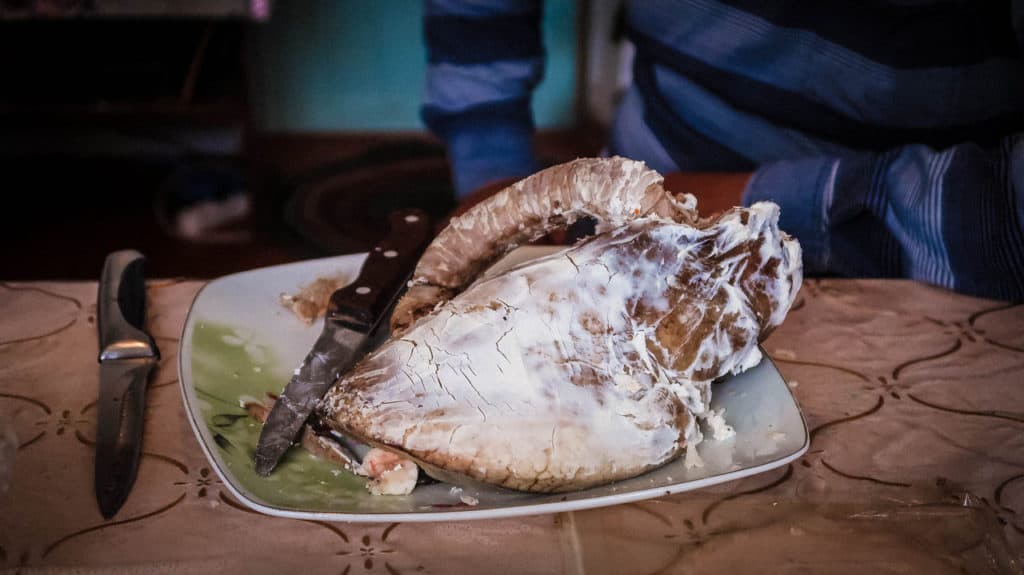 Fried dough that is served on special occasions to honor the dead. By eating borsok, the Kyrgyz are symbolically eating for the deceased. 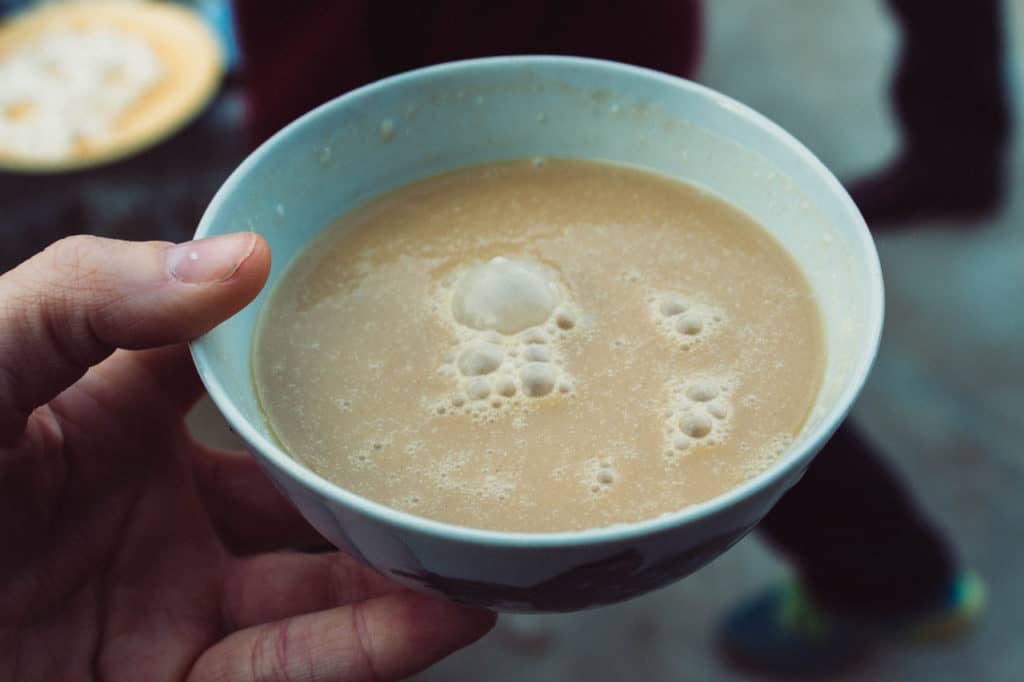 Aside from spending time with family, friends, and neighbors and symbolically sharing a meal, the Kyrgyz people also celebrate Nowruz with a wide range of cultural performances and traditions.

Everybody dresses up in their finest clothes and a lot of people will wear traditional Kyrgyz clothing for the occasion. 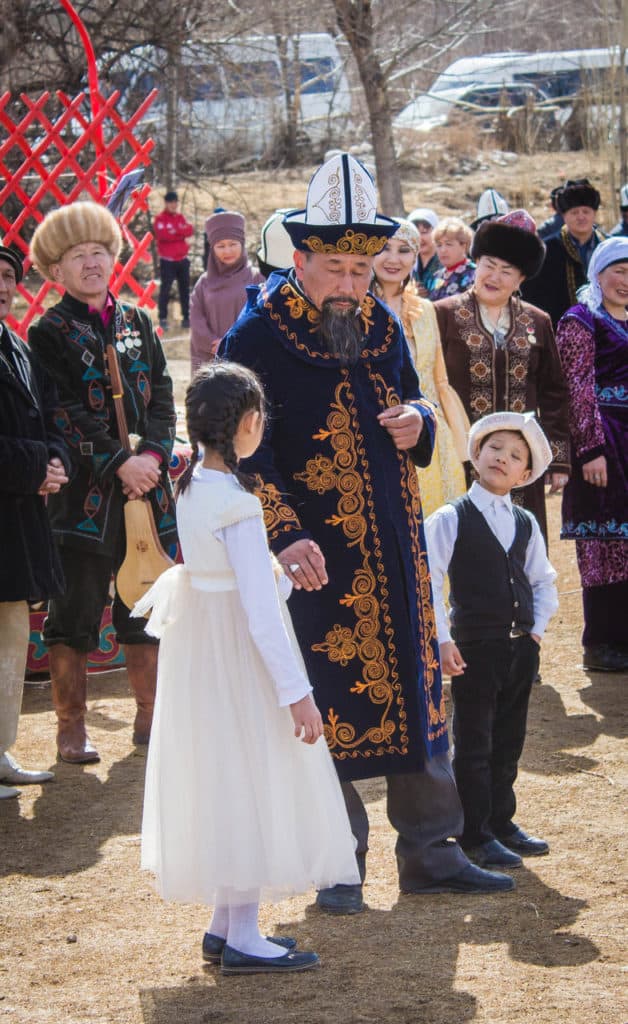 This man is wearing a “chapan”, a padded coat made of a strong and warm woolen fabric and a “kalpak”, a white felt hat.

The traditional clothes for women consist of long dresses (“keynel”) and long wide trousers. Married women will wear an “elechek”, a hat in the shape of a turban.

The “Takiya” is a small cap with decorated ear flaps and the “Shokulo” is a conical hat with feathers. Both are only worn for special occasions and performances.

The festivals on Nowruz start with a welcoming ceremony during which performers recite poems and tell stories about Nowruz, sing traditional songs that are accompanied by instrumental music and perform traditional dances. 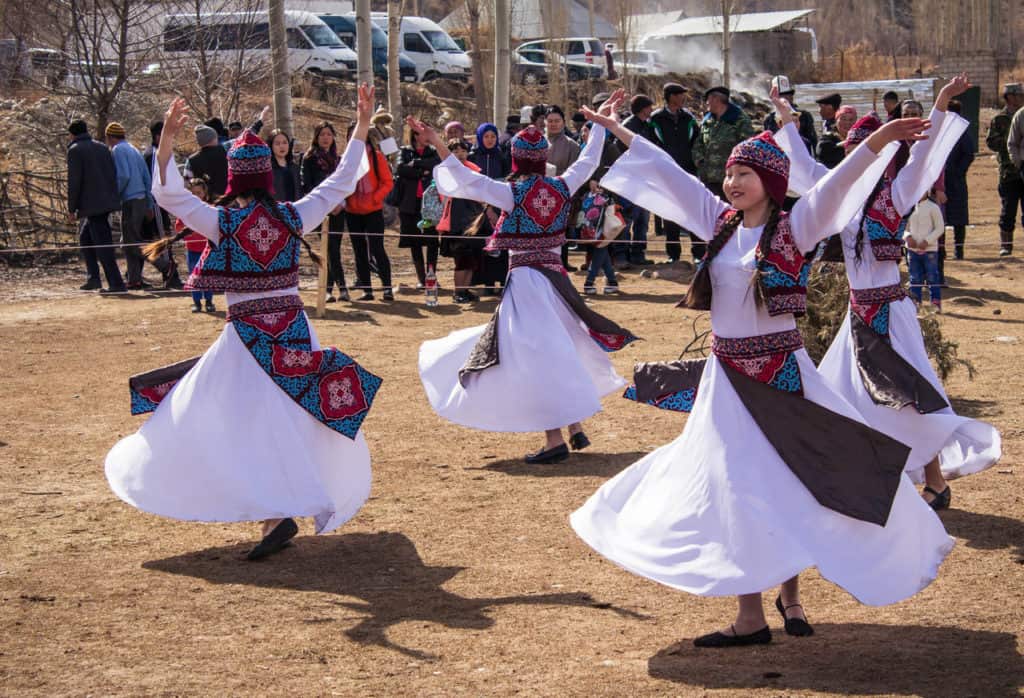 It’s also a tradition to burn a branch of juniper to symbolically cleanse away the troubles and bad luck from the past and start the new year refreshed and renewed.

The Kyrgyz people often perform this ritual in their own homes and during the ceremonies in festivals and events. 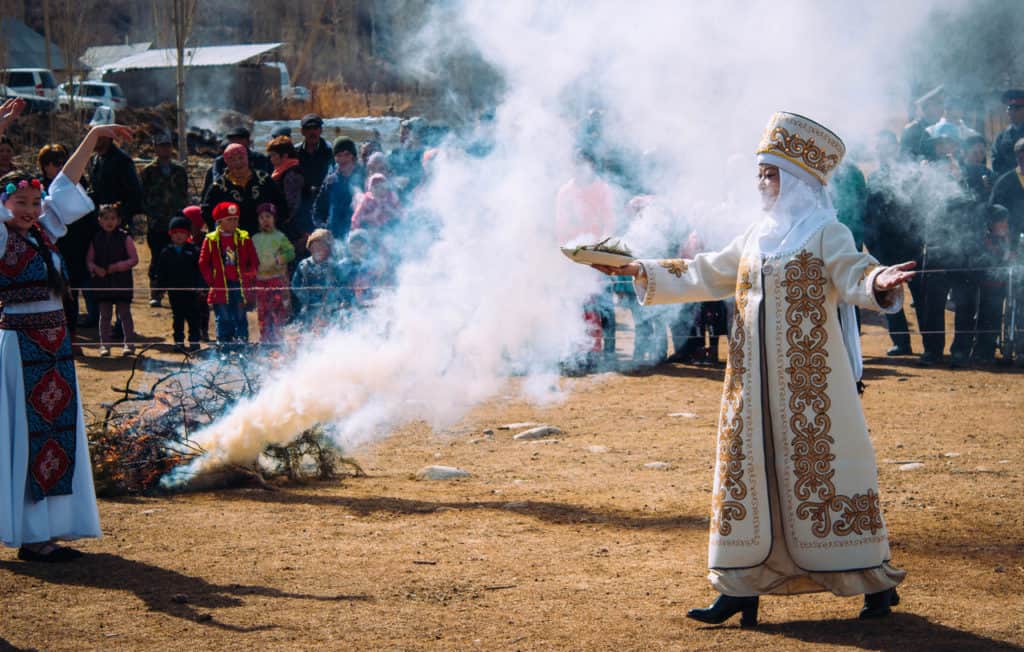 No celebration would be complete without showcasing the national sports and games.

Horse games are the most popular entertainment in Kyrgyzstan and teams will gather for horse races and championship games like Kok Boru. The biggest competition of Kok Boru can be watched at the Hippodrome in Bishkek.

There weren’t any horse games on the South Shore National Games Festival but instead, we got treated to some competitions in archery, wrestling, dancing and a fine demonstration of Salburun (a nomadic tradition of hunting with eagles).

There was also a competition for the South Shore villages in demonstrating their knowledge and skills of the nomadic traditions.

Representatives of several villages were competing against each other in who had the most beautifully decorated yurt and who could prepare the best traditional nomadic food.

Visiting the different yurts and tasting this food was already an event on its own!

A demonstration of yurt building

Inside one of the yurts

Celebrating Nowruz the Kyrgyz way was definitely a memorable experience! If you’re planning on traveling to Kyrgyzstan around the 21st of March, you just have to attend one of the many cultural events and open-air festivals!

We strongly suggest you visit the South Shore National Games Festival in Kyzyl-Tuu, a small village on the Southern shore of Issyk-Kul lake, organized by the Ethno-Cultural Tourist Destination South Shore. The entrance to the festival is free.

You can also visit the nearby village of Eshperov where villagers hold an annual food festival on Nowruz. We recommend these places as not every town or village celebrates Nowruz in such style and festivity as these ones!

Watch our video of this special day here:

How to get to Kyzyl-Tuu from Bishkek:

You can easily get to Kyzyl-Tuu and Eshperov by mashrutka (mini-bus). Go to the Western Bus station in Bishkek and ask for the mashrutka with destination Bokonbaevo.

The journey takes about 4 hours and one ticket costs 250 som (about US$3.5). You can ask the driver to drop you off at Kyzyl-Tuu or Eshperov and the South Shore National Games Festival is located just before the green bus stop in Kyzyl-Tuu.

If you feel more comfortable in a guesthouse, then you’ll have to go to Bokonbaevo (a 20-minute drive from Kyzyl-Tuu). You can travel between both places by mashrutka, taxi or you could always hitchhike the distance.

We recommend Guesthouse Ulukbek or Guesthouse Guljan! (If you use these links to book a room, we earn a small commission at no extra cost to you).

Prepare your trip to Kyrgyzstan by reading our Ultimate Travel Guide to Backpacking in Kyrgyzstan!

Disclaimer: This post contains affiliate links. If you book your accommodation through one of the links, we get a commission at no extra costs to you! See it as a small donation to keep this blog going. Thank you!

2 thoughts on “Celebrating Nowruz in Kyrgyzstan”