This is a complete guide to the Uzbekistan train system, including information on taking the Uzbekistan high-speed rail and the Uzbekistan sharq train. In this article, you’ll also find a list of the popular train routes in Uzbekistan as well as train schedules.

For years, traveling to Uzbekistan was rather complicated. Getting a visa for the country was difficult and the roads and trains connecting the different cities around the country were really bad.

But that is all changed now. Uzbekistan is opening to the world. Traveling around this small Central Asian country is becoming easier and easier thanks to a super good railway system.

If you’re planning to visit this gorgeous destination and you’re wondering how it works to take trains in Uzbekistan, read on.

In this article, I’ll tell you everything you should expect from your train journey in Uzbekistan.

Are trains in Uzbekistan good?

Trains in Uzbekistan are good and becoming better and better.

This is the most expensive Uzbek train but also the fastest one to reach your destination. You can travel in 1st and 2nd class and there are power plugs next to the seats. This is very handy if you want to get some work done on your laptop!

Traveling by rail in Uzbekistan is the ideal way to travel between popular cities such as Bukhara, Khiva, Tashkent, and Samarkand.

The Sharq is a more old-fashioned train. It is slower than the Afrosiyob and also cheaper (about half the price). The Sharq has a 1st, 2nd and 3rd class.

Traveling on this ‘slow’ train is also very comfortable and there are USB plugs available next to your seat (in 1st and 2nd class) to charge your phone during the train journey (helloo Netflix!).

While you can expect a very smooth ride on the Afrosiyob, the Sharq train will be bumpier.

All these trains sell coffee, tea, and snacks during the trip but it’s cheaper to buy your snacks before your train journey. If you travel with the Afrosiyob, you’ll get a free cup of tea and a small bag with some pastries.

Why should you travel by train around Uzbekistan?

Unlike the very mountainous green landscapes of Kyrgyzstan, Uzbek’s landscapes are generally flat barren deserts. There aren’t many interesting sights to see along the road and the journey by marshrutka between cities is quite long and hot.

Traveling around Uzbekistan by train is way more comfortable than by shared taxi or marshrutka. You’ll have plenty of leg space and you’ll be able to actually enjoy the ride.

It’s also a great way to meet the locals and practice a bit of Russian.

How much does it cost to take a train in Uzbekistan?

Trains in Uzbekistan are very affordable and a great way to travel around the country.

To give you an idea of how much a train ticket costs, Cynthia and I paid 90.000 UZS ($10) per person for a 2nd class ticket from Tashkent to Bukhara on the Sharq train.

We paid 180000 UZS ($20) per person for a 2nd class ticket from Bukhara to Tashkent on the Afrosiyob (high-speed) train. This was during the high season.

This is the train station in Tashkent…

Here are a few more examples of how much you would pay for trains in Uzbekistan:

Prices of trains from Tashkent to Khiva (14 hours):

Prices of trains from Tashkent to Samarkand (between 3 and 4 hours):

What are the different types of trains in Uzbekistan?

There are three types of trains (and we’ve tested them all!): the Afrosiyob, the Sharq and the Night Train. With so many train options and train routes to choose from, it’s super easy to create your own Uzbekistan itinerary.

This is the newest addition to the Uzbek railway system. The Afrosiyob train is an ultra-modern, high-speed train that connects most major cities around the country. With the Afrosiyob, you can easily travel between Tashkent, Samarkand, and Bukhara.

If you want to reach Khiva by train (since 2018 a train station opened), you’ll have to take an older Soviet train.

The Afrosiyob train is very comfortable and modern but not expensive at all. That’s why it fills up very quickly and during the holiday you might find it to be fully booked unless you buy your tickets ahead of time.

You can take the Afrosiyob to travel directly between the following popular cities:

This is the inside of the Afrosiyob train. Super modern and cozy…

Sharq trains are older Uzbek trains that have been in use since the Soviet era. A ride in a Sharq train is definitely not as smooth as being onboard the Afrosiyob and you might feel a few bumps along the way.

They are used to reach cities and regions that are farther from the Uzbek capital like Urgench, Khiva, and Fergana valley for example.

You can take the Sharq train to travel directly between the following popular cities:

You can take the Night Train if you want to travel directly between the following popular cities:

How can you book tickets for trains in Uzbekistan?

You should buy your train ticket at least one day in advance, especially if you’re traveling during the high season (May – October).

In theory, you can buy e-tickets on the Uzbek Railways website, but in reality, it’s not that straight-forward.

You have to buy the tickets through the Russian version, the payment doesn’t always come through and you still have to pick-up the ticket in the ticket office at the train station before your journey.

It’s a lot easier to just go directly to any train station and buy your ticket(s) at the ticket office, which is usually located next to the train station. Most clerks speak English. Don’t forget to bring your passport!

If you have a planned itinerary and you know already the dates during which you want to travel, you can even buy all your train tickets in one go. You can pay cash for the tickets or with a Visa card.

On the day of departure, arrive 1 hour in advance at the train station. There might be long queues at the entrance (especially in Tashkent) where your luggage and passport get checked.

What is the Uzbek train schedule?

You can check the time tables for the trains in Uzbekistan through the website of Uzbek Railways.

The website automatically translates to English but it’s still a bit difficult to navigate as you have to enter the names of the cities in Russian.

We used Google Translate to find the names of the cities written in Russian, then copied and pasted them in the search bar of the website.

To save you the trouble of using Google translate, we’ve included the name of the most popular Uzbek cities in Cyrillic alphabet here:

Things to bring with you on an overnight Uzbek train

If you visit Uzbekistan during winter and take a night train, the cabins could be a bit chilly. I would recommend bringing a few extra sweaters to stay warm.

Night trains in Uzbekistan already have pillows and blankets but they’re not always clean so it could be a good idea to bring your sleeping bag just in case.

There are people going between the different wagons selling snacks and sandwiches but these tend to be a bit pricey so it’s better to bring your own snacks if you want to save some money.

There are generally no plugs to charge your laptop on night trains in Uzbekistan so make sure you have a full battery if you want to get some work done.

Another good thing to bring on an overnight train is a stainless steel mug, some instant coffee, and some instant noodles. These trains usually have a hot water dispenser in every wagon so it’s very easy to make a quick coffee or some noodles on the go.

Last but not least, I would recommend bringing some toilet paper. These trains have toilets but they tend to run out of toilet paper very quickly.

We hope this guide will help you take trains in Uzbekistan. Have you ever traveled by train around the country? Are you planning to go soon? Let us know in the comments below!

I'm a vagabond and a lover of wild untouched nature. I travel around the world in pursuit of beautiful inspiring landscapes and fascinating cultures. I'm always trying to learn and master the languages of the places I visit.I've been bitten by the travel bug eleven years ago and haven't stopped traveling since.

You’re wondering what’s the best way to get from Almaty to Tashkent? Then you... 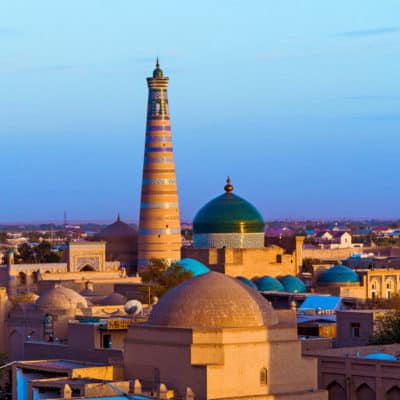 What are the things you should do and visit in Khiva? Maybe you’re wondering...

Wondering how to get from Bishkek to Tashkent by bus? Read on to find... 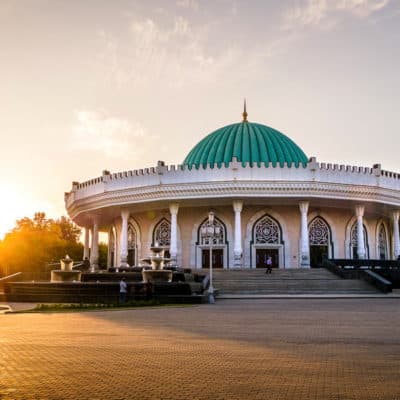 Tashkent will be very likely the first city you’ll arrive in when you travel...

Are you planning a trip to Uzbekistan soon and looking for a detailed Uzbekistan...

What are the things you should do and visit in Bukhara? Maybe you’re wondering...

How was it to travel as a woman alone in a country like Uzbekistan?  Is...