Oh yeah, one of the realities of travel is long train rides and bus rides which will test both your bladder and your patience from time to time. So grab a book and settle in, we’re heading off to Morocco.

One of the best ways to visit a country (besides visiting it) is to plow into the literature its given birth to…and as I’ve been well known to have a book in my hands at all times for the last couple decades…I decided to gather together the best gems I found while living in and reading about Morocco.

Here are some of the best books set in Morocco:

Told from the point of view of a group of survivors of an illegal attempt to cross the Strait of Gibraltar and into Spain via rubber lifeboat. Some escaped into Spain, and some did not.

This takes four of them and tells you of their lives before the crossing; what was it that made them risk their lives to move into an unknown society, where it was imagined all would be better?

Told in bare-bones stripped-down storytelling prose, it’s just as relevant today as it was a decade ago, a penetrating examination of immigration and perception.

2. The voices of Marrakech – Elias Canetti

A strange, beautiful delight of a novelette. Writing filled to the brim with a piercing curiosity, sharp observations, insights, and meditations on ‘everyday’ encounters in Marrakesh during this Nobel Prize laureate’s several week visit.

A collection of short stories I was sad to leave when I’d finished.

Elias has one of the most human, elegant and non-pretentious writing voices I’ve encountered, and as you journey with him briefly through the alleyways, streets, souks, shrines, beggars, merchants and inhabitants of Marrakesh you’ll find a marvelous storyteller laying bare shreds of the city’s soul as well as his own.

Click here to get your copy of THE VOICES OF MARRAKESH

I hesitated to put this book on the list, as it’s such a depraved tangle of phrases, paragraphs, characters, and emotions that once you enter it you’ll emerge later as from a twisted labyrinth, blinking with shock to see the sun still shining.

Though written while the author was living in Tangier, there’s not much storyline to speak of; it’s more of an onslaught of experimental and shocking writing meant to convey a spirit of paranoia, aggression, disturbing sexuality of the pedophile variety, and decadent hard drug use… plenty of which have all existed in the city at one time or another.

The Tangier that Burroughs buried like a hastily rotting corpse in this book doesn’t exist these days, more likely most of it existed only in his mind, but you can still smell the rank fear, urine, paranoia, and aggression that rears its fangs here in some streets on the right, or wrong night.

Click here to get your copy of NAKED LUNCH

A masterpiece of tense, sparse, clean and beautiful writing. Bowles lived in Morocco for the greater portion of his life, and his accounts of the country, its politics, cultural nuances, and way of life, particularly when a Westerner is immersed in and confronted by its unfamiliarity, are fascinating and illuminating.

This is a fictional account set in the late forties about a husband, wife, and one of their acquaintances following an impulse for exploration that leads to disaster and downfall.

I won’t spoil the arc, but like some of Bowles’ other pieces, it covers the fierce terror and exhilaration of traveling deep into a ‘wild’ country without a safety net, how it can erode sanity and take the traveler much further into realms they never imagined encountering.

Click here to get your copy of THE SHELTERING SKY

Classic. A haunting biographical look through the eyes of an extremely impoverished Moroccan life in Tangier.

Told in simple, striking language describing truths with a direct force that lingers in your mind. This book will open your eyes to some of the harsh realities of life in the Moroccan underclass, in any developing country.

Click here to get your copy of FOR BREAD ALONE

Reads like a slightly expanded personal journal told in almost academic prose, a consuming attention to detail which slowly unveils great complexity, the kind of writing which books aren’t written in anymore.

An anthropologist couple moves into a house in the old medina, or ancient city of Marrakech for a year with their two young children, circa 1972.

What follows is a hyper-realistic and intriguing account of the slow integration into everyday life, it’s various social tests, struggles, miscommunications, celebrations, stubbornness, and surprise. An illuminating account, all the more so as it provides a unique if brief glimpse into the society of Moroccan women.

Click here to get your copy of A STREET IN MARRAKECH

Set in Fez in 1954 during Morocco’s nationalist uprising, published in 1955, and 1956 was the year Morocco declared independence from the French protectorate.

Yes, Bowles is on here twice, covering some of the same themes, yet the tale told in The Spider’s House is one which rings with much more prescience and relevance today, not to mention it’s timing in a thread of events.

Told from the point of a view of a devout Moslem boy, an American expat who lived in and loves North Africa of the past, and an American tourist who exemplifies all the cliche’s you can think of.

It’s a clash of ideologies in a city of escalating violence where each of the characters begin to think differently. Oddly reminiscent of the current streams of conflict between East and West today.

Click here to get your copy of THE SPIDER’S HOUSE

8. Gravity according to birds – Leo Skala

Sure, I’m biased, I wrote it. This is a magical realistic novel based on my own experiences of first arriving in Tanger, planning to stay for a single day with only a hundred dollars to my name, and somehow ending up hitchhiking through the entire country and living in Tanger for several years.

To view the printings and see what other readers have said about it, visit soundinglines.

Click here to get your copy of GRAVITY ACCORDING TO BIRDS

Sequel to The Sand Child, a hallucinatory masterpiece of surreal and terrifying secrets, guilt, and potent varieties of shame. You meet Zahra, a young Moroccan woman discovering womanhood.

Zahra had been born the eighth of eight daughters, endured several ‘circumcision’ rituals and passed off as a boy until her father’s death on the 27th Night of Ramadan, the Sacred Night, the Night of Destiny, just after he has for the first time acknowledged his daughter as just that.

A story of doomed and bizarre destinies, how they entangle, and what each member clings to in order to cope with the situation.

Click here to get your copy of THE SACRED NIGHT

Tahir Shah decides to move his wife and three children from their dreary life in London into an ancient, ruined and haunted mansion on the outskirt slums of Casablanca. Dar Kalifa, the Caliph’s House.

It’s a jaunty, often funny tale, hinging around three Moroccan guardians who’ve come ‘in some sort of medieval transaction’ with the house, the rigors of remodelling amidst accepted social corruption, the belief that there is a horde of Djinn, or malicious evil spirits living in Dar Kalifa, and Shah’s ironic position of being essentially a Western foreigner with a rationalist mindset raised in England, though he is at the same time, in fact, a descendant of the Prophet Mohammed through his Afghan family line.

Supremely readable with sometimes awkward writing, yet an absolutely wonderful tale highlighting a clash and reconciliation of cultures in a magical light.

Click here to get your copy of THE CALIPH’S HOUSE

The 11 Best and Most Inspiring Travel Books!

Bonus. Has nothing to with Morocco whatsoever, but I figured while we were in the general neighborhood of Africa we may as well pay a visit to Baronness Blixen on her coffee plantation in Kenya.

Blixen wrote this in the 1930s under the pseudonym Isak Dinesen to disguise her gender, and many readers were surprised to learn she was a woman.

This is her account of owning and working a coffee plantation for ten years with the local tribesman called the Kikuyu in the hills outside of Nairobi.

Such a surprising, gentle, fascinating tale which you’ll find yourself strangely enriched by as she lays out the hopes, dreams, rhythms, wonders, sadnesses, realities, and rugged beauties of this decade.

Click here to get your copy of OUT OF AFRICA

Bonus again! This time we’re off to Alexandria, Egypt in the 1930’s in the first installment of the Alexandria Quartet. A four-book series told during the same timeline around a set cast of characters, each book containing one of their voices, viewings, and versions of the same set of events.

A fascinating meditation on art and the varieties of love, despair, regrets, and hilarities of life told in sleekly muscular prose, studded with beautiful and terrible visions.

*This article contains affiliate links. If you purchase one of the recommended products through our website, we’ll receive a small commission at no extra costs for you. This way you’re helping us writing more informative and awesome guides like this. Thank you!

This list of best books set in Morocco was written by Leo Skala. Leo is a multidisciplinary artist and traveler whose primary focus is the Word. Written word, oral storytelling, musical phrases, chants, and djembe drumbeats. Author of a book of poems and a novel, if he’s not out hiking in nature, doing yoga, or making music he may be found writing away on one project or another, studying a language, cozied up between the pages of a book, dancing or setting up a typewriter in a public street to write impromptu poems for passing strangers. For awesome stories about his travels around the world, head over to Soundingline. 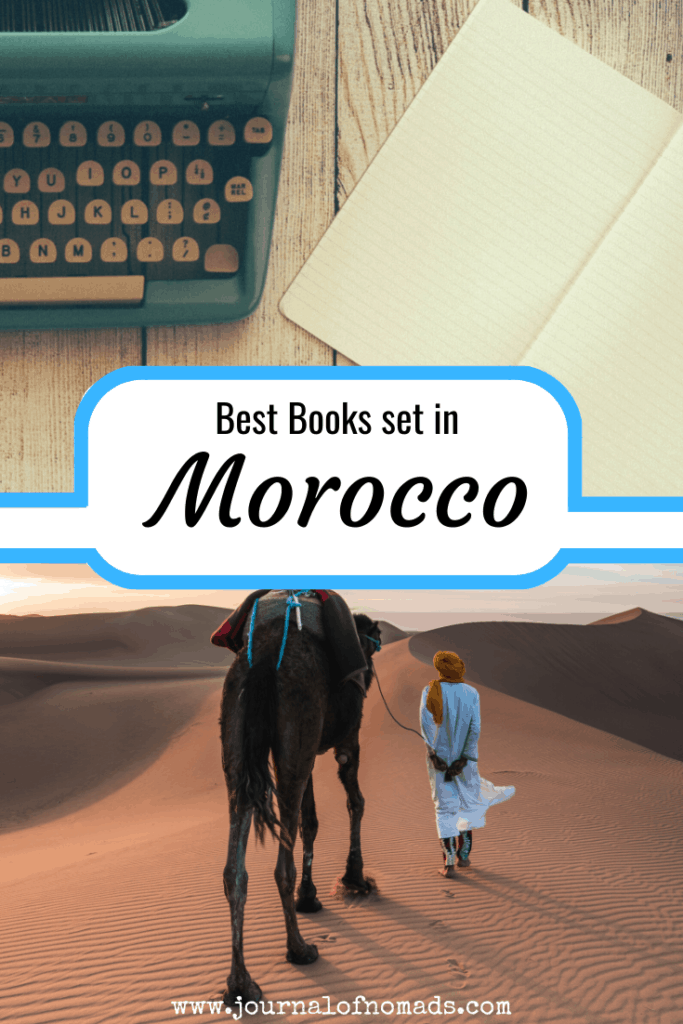 Read the rest of our articles for more travel tips for Morocco:

How is it to travel to Morocco during Ramadan?