Cynthia and I arrived for the first time in Kyrgyzstan in the fall of 2017, after hitchhiking all the way from Europe to Asia. We had the intention to spend only a few days there but as soon as we had set foot in the country, we fell in love with the beauty of its culture and mountains. 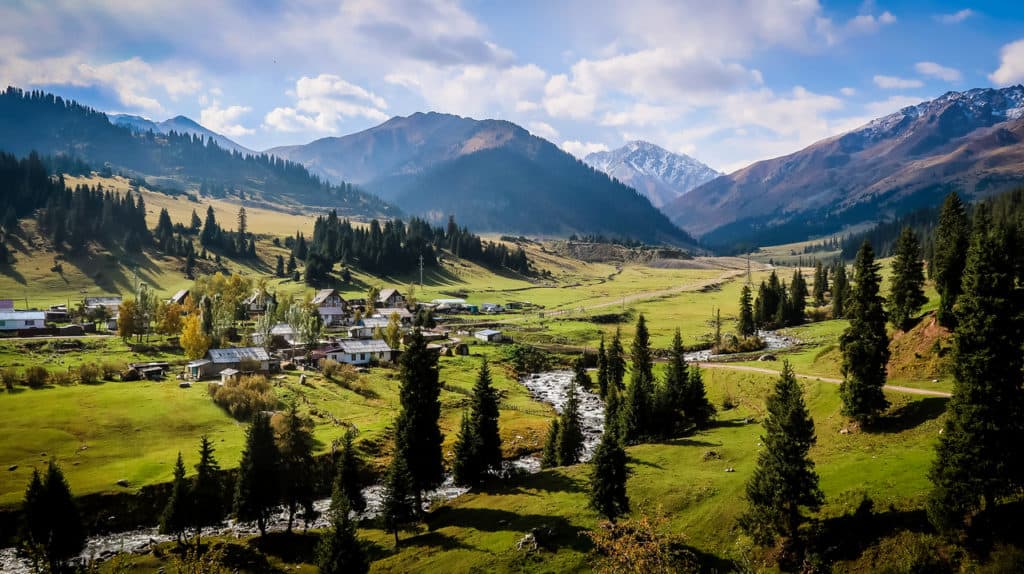 On the third day of our visit, we even changed our travel plans and decided we wanted to spend at least a few months in Kyrgyzstan to learn more about this beautiful Central Asian country and its culture. Those few months became almost an entire year!

Read: The Top 28 things to do in Kyrgyzstan

As Canadian and Belgian citizens, we could enter Kyrgyzstan visa-free and were allowed to stay there up to 60 days. Holders of a UK, EU, US, Australian and New Zealand passports and citizens of following countries can also enter Kyrgyzstan on a free tourist visa and remain there for 60 days.

So how did we manage to stay nearly 12 months in the country without overstaying our tourist visa or getting in trouble with the Kyrgyz authorities?   There is an option to apply for a 3-month visa at the Kyrgyz Embassy or Consulate (more info about this here).

However, it’s a time- and money-consuming process and it would only give us three extra months, which wasn’t very interesting for us as we wanted to stay longer.   So we chose the second and easiest option: every two months we renewed our Kyrgyz travel visa by doing a visa run. Up until today, there is no law that states how long you can stay in Kyrgyzstan within one year so every time you enter the country, you receive a new tourist visa which allows you to stay another 60 days.

There are a few different areas where you can cross the Kyrgyz border into the neighboring countries to renew your visa for Kyrgyzstan.   In this article, I’ll tell you how we usually crossed the nearest border with the capital of Kyrgyzstan and traveled from Bishkek to Almaty. I will also cover other borders that you could cross to have a brand new two months in the country.   Important note: If you’re a citizen of a country that doesn’t get a free visa on arrival, you’ll have to apply for a new visa in a Kyrgyz Embassy outside of the country. Almaty in Kazakhstan is probably the best place to apply for a new visa.

Read also: The Ultimate Travel Guide to Backpacking in Kyrgyzstan

Traveling from Bishkek to Almaty to renew your visa

During our stay in Kyrgyzstan, we were renting an apartment in Bishkek, the country’s capital city. So the first and most obvious way for us to renew our Kyrgyz visa was to travel every two months from Bishkek to Almaty.

Doing this enabled us to cross the border out of and back into Kyrgyzstan thus getting a fresh stamp in our passports every time and getting a brand new 60 day-visa for the country. We also didn’t need to apply for a Kazakh visa in advance as we received a free visa on arrival in Kazakhstan.

In our Backpacking Guide to Kazakhstan, you’ll find more information about the travel visa for Kazakhstan.   In a whole year of doing this, we only got asked once what we were doing in Kyrgyzstan and received nothing but smiles at the border.   Tip: If the border officials would ask you what you’re doing in Kyrgyzstan, it’s important that you state that you’re visiting the country as a tourist!   We also strongly suggest that you stay outside of the country for at least 24 hours. We usually spent a day or two in Almaty before returning and never had any problems when we re-entered the country.

We heard stories from travelers who ran into troubles when they tried to re-enter Kyrgyzstan the very same day. They had to answer a long series of questions of their whereabouts in Kyrgyzstan and why they had stayed in the country for so long.   It is worth traveling all the way to Almaty by mashrutka (minibus) as the two cities are not far from each other and it’s possible to reach this beautiful city of Kazakhstan in a day.   Almaty is also located near the Tien-Shan mountains, making this city the perfect base for a hike to the mountains before heading back to Kyrgyzstan.

Read also: Hiking in Almaty – The best and most beautiful day hikes

View from one of the day hikes near Almaty

Whenever we visited Almaty, we had the habit of staying at the budget-friendly European Backpackers Hostel (we really love it there and the owner has become a really good friend).

Read: How to get from Bishkek to Almaty

Crossing 2 other borders between Kyrgyzstan and Kazakhstan

While the first border is relatively easy to cross, the second one in the Karkara valley requires a 4wd car and the road is not well maintained. The Karkara valley crossing is also closed between November and April due to the huge amount of snow.

This was our point of entry in Kyrgyzstan and it’s the perfect border crossing if you are based in the western part of the country.   It’s possible to take a taxi from Talaz to the border for 200 SOM. From the border, you can then continue with a Kazakh taxi all the way to Taraz for around 2000 tenge or you can try hitchhiking there if there is plenty of traffic.

The road between Talaz and the border is quite scenic as you can see in this video. Another interesting feature of this road is a bas-relief depicting the Soviet state founder Vladimir Lenin on a dam of the Kirov Reservoir in Talas.

This border crossing is really beautiful and will take you along some of the most pristine valleys Kyrgyzstan has to offer. It’s a great option to renew your visa if you are based in Karakol.   The road, however, is not so well maintained on either side of the border so it’s important to have your own 4WD to reach the border. It can also be reached by taking a taxi but this might cost you a lot of money and the taxi won’t cross the border.

The road on the Kazakh side will take you all the way to Almaty and it is possible to explore a region of Kazakhstan on the way known as the ‘Golden Triangle’ for its trio of major natural attractions: the Charyn Canyon, the Kolsai Lakes, and the Altyn-Emel National Park.   If you want to visit some awesome places before returning to Kyrgyzstan, I absolutely recommend visiting at least one of these natural beauties.

If you have your own car, the border is located around 85 kilometers from Tup on the Kyrgyz side.   If you don’t have a car, you could catch a taxi from Karakol to the border for about 20 USD. From the border to Almaty you will need to hitchhike as there are no taxis at the border and very little traffic on this road.

This border is closed during winter. It’s generally open between May and October.   It has been the least stressful border crossing we did between Kyrgyzstan and Kazakhstan as there were barely any people and we spent some time joking and exchanging stories with the border guards. They were very relaxed and actually seemed like they were enjoying the company of travelers passing by.

Crossing into Uzbekistan from Osh (Kyrgyzstan) in Dostyk

This border crossing into Uzbekistan went smoothly for Cynthia when she traveled there alone in 2017.    If you plan on spending time traveling around the country before re-entering Kyrgyzstan, make sure to read our Backpacking Guide to Uzbekistan.

This border crossing is only a few kilometers from Osh. It’s possible to get there by taking mashrutka 107 from Razakova Avenue heading away from the city center towards the border.

The ride should cost 10 KGS per person and you will be at the border in no time.   It’s a good idea to have some Uzbek Som when you arrive at the border. There is an exchange booth located before the Uzbek immigration office where you can exchange Kyrgyz Som or US dollars for Uzbek Som before entering the country.

Once you cross the border, there will be many taxis waiting for you on the other side of the immigration office. It’s possible to get from there to Andijon for 10 000 Uzbek SOM if you share the taxi with other travelers. If you are alone in the taxi however you shouldn’t pay more than 40 000 SOM. 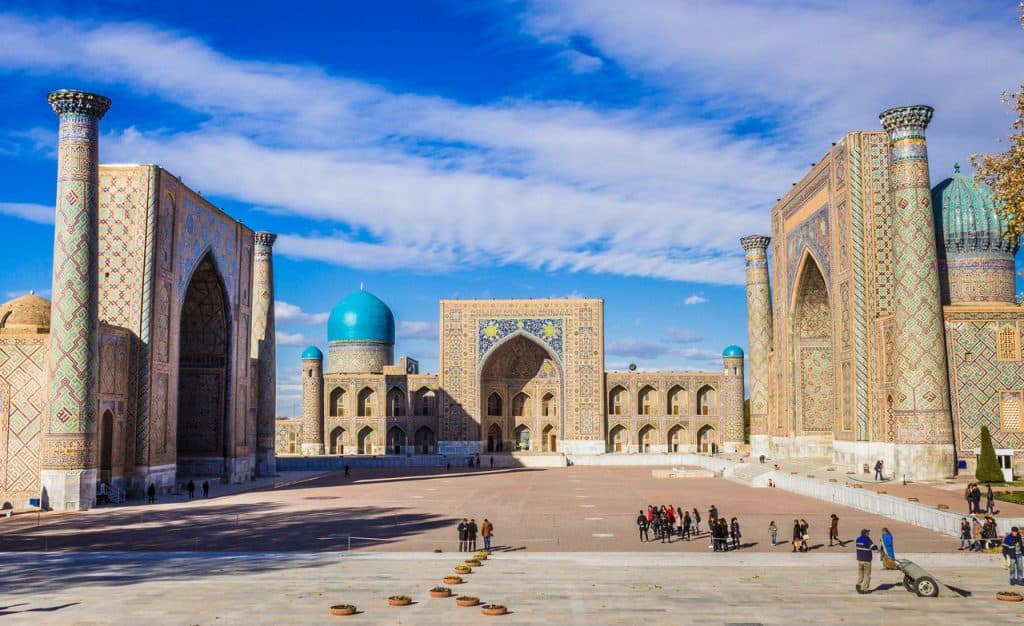 Crossing the southern border with Tajikistan and spending some time in that mountainous country before heading back north is also a possibility to renew your travel visa for Kyrgyzstan.

However, this border crossing can be a bit more complicated as you first have to apply for a visa for Tajikistan online or at an embassy and you also need a permit to enter the Gorno-Badakhshan Autonomous Region, an autonomous region in Tajikistan.

For a complete guide on this border crossing, make sure to read this guide written by our friend Joan Torres from Against the Compass.

Read also: Top Things to do in Bishkek – The Complete City Guide to Bishkek

Flying out of Kyrgyzstan to a neighboring country

Crossing one of Kyrgyzstan’s overland borders is the cheapest way to renew your Kyrgyz visa. It’s a lot more expensive if you’d fly for example from Bishkek to Almaty.

But, if you have the time and budget, you could always fly out of Kyrgyzstan to destinations like Nur-Sultan (Kazakhstan) or Tashkent (Uzbekistan) that take quite some time if you’d travel there overland by bus or train.

Kyrgyzstan is a gorgeous country full of beautiful unexplored mountains and untouched nature.   The country offers a lot of fun activities to discover nature and culture. Kyrgyzstan could also be a great base to stay for a while if you’re a digital nomad as the living expenses are very low, especially since it’s so easy to renew your visa.

Have you visited Kyrgyzstan or do you plan on visiting the country soon? We’d love to hear about your experience, let us know in the comments below!

4 thoughts on “How to renew your travel visa for Kyrgyzstan”